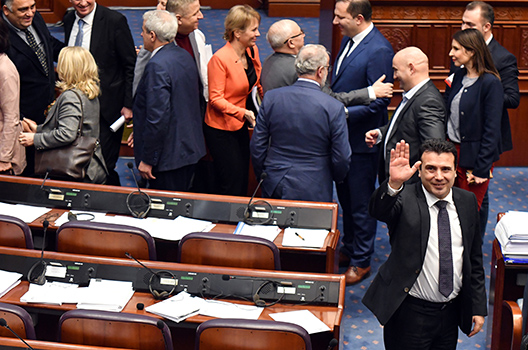 Macedonian lawmakers on January 11 approved a set of constitutional amendments that will see the name of the country changed to the Republic of North Macedonia, potentially opening the way for the Balkan country to join NATO and the European Union.

“Today, the people of Macedonia secured their future and assured their place in the heart of Europe,” Atlantic Council Executive Vice President Damon Wilson said. “No longer will their nation be on the transatlantic alliance’s periphery, stuck in a geopolitical limbo. With an historic parliamentary vote approving constitutional amendments to fulfill the obligations within the Prespa Agreement with Greece, Macedonians have determined their own destiny.”

The name change was a key part of a deal made in June 2018 between Macedonian Prime Minister Zoran Zaev and Greek Prime Minister Alexis Tsipras—known as the Prespa Agreement—that would see Greece drop its opposition to Macedonian membership in NATO and the EU should Macedonia change its name to North Macedonia. For twenty-seven years, Greece refused to recognize the title of “the Republic of Macedonia” due to concerns about potential claims on Greek provinces that use the designation “Macedonia.”

Eighty-one of the one hundred and twenty members of the Macedonian parliament voted in favor of constitutional amendments to change the name, giving Zaev the two-thirds majority needed to pass them. Macedonian voters had approved the name-change deal in a consultative and non-binding referendum in October 2018, but the result was muddled due to low turnout.

With Macedonia’s parliament giving its consent to the name change, it will now be up to the Greek parliament to approve its half of the Prespa Agreement. Tsipras is widely believed to have enough support for the measure in the Greek parliament, but tensions remain within his governing coalition over the deal.

“The Macedonian parliament has just taken a giant step forward. But the final step is still pending in Greece,” said Michael Carpenter, a nonresident senior fellow at the Atlantic Council’s Eurasia Center, Future Europe Initiative, and Scowcroft Center for Strategy and Security. “Prime Minister Tsipras has shown extraordinary leadership in negotiating this agreement, but now it is up to the Greek parliament to hopefully grasp the strategic significance of having Greece’s northern neighbor anchored in Euro-Atlantic institutions,” he said.

“This agreement is good for both countries, for NATO, and for stability and security in the Balkans,” Carpenter added. “Let’s hope it is fully ratified soon.”

For Wilson, Greece has as much to gain from the deal as Macedonia. “A vote to approve the agreement in Athens would help restore Greece’s traditional role in Southeast Europe, reposition Thessaloniki as the gateway for the region, bolster prospects for regional prosperity, and provide Athens the security that comes from all of its northern neighbors on track to be NATO allies and future EU members,” Wilson said. “Together, today’s vote and the upcoming vote in Athens, will end a twenty-seven-year conflict between neighbors who are now poised to become allies.”

Following the announcement of the Prespa Agreement in June 2018, NATO leaders officially invited Macedonia to join the Alliance at their summit in Brussels on July 11 pending the successful ratification and implementation of the deal. Speaking at the NATO Engages event—co-hosted by the Atlantic Council in Brussels—immediately after receiving the invitation, Zaev said that “NATO means [not only] stability and security, but also [a growing] economy and encouragement for investment.”

“I think we moved mountains with this agreement,” Zaev said. “We showed to our neighbors and probably the rest of the world, a role model for how that kind of sensitive question is even possible to solve.”

In a tweet congratulating Zaev, NATO Secretary General Jens Stoltenberg said that “NATO strongly supports the full implementation of the agreement, which is an important contribution to a stable and prosperous region.”

The door also could be opened to Macedonia joining the EU, as although the bloc has not formally offered to open accession talks yet, it has clearly stated that Macedonia and its neighbor Albania would be next in line for membership should they make progress on rule-of-law reforms, organized crime prevention, and settle lingering disputes with their neighbors.

Image: Macedonian Prime Minister Zoran Zaev greets the press after deputies of the Macedonian parliament vote to pass constitutional changes to allow the Balkan country to change its name to the Republic of North Macedonia, in Skopje, Macedonia, January 11, 2019. (REUTERS/ Tomislav Georgiev)