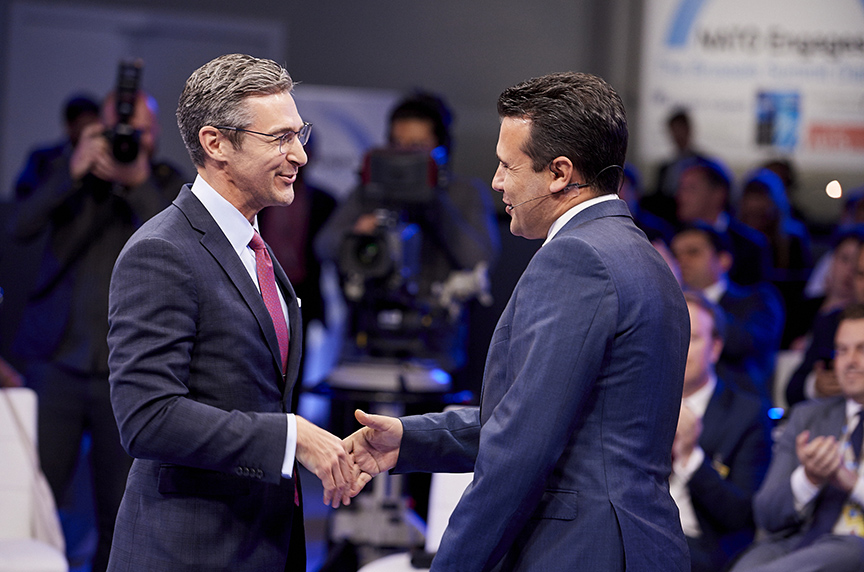 Zoran Zaev, the prime minister of the Former Yugoslav Republic of Macedonia (FYROM), celebrated his country’s potential NATO membership in Brussels on July 11 just minutes after it was announced that the bloc would invite FYROM to begin accession talks.

Zaev was set to speak in a public session as part of the NATO Engages event in Brussels, and Damon Wilson, executive vice president of the Atlantic Council and moderator of the conversation with Zaev, broke the news to the assembled audience, after NATO leaders released their summit declaration, including a passage on FYROM accession.

NATO’s invitation was made possible after a deal was reached between Zaev and Greek Prime Minister Alexis Tsipras on a new name of FYROM. For nearly twenty-seven years, Greece refused to recognize the title “the Republic of Macedonia,” due to concerns about potential claims on Greek provinces who use the designation “Macedonia.” Zaev and Tsipras, however, were able to break the impasse in June by agreeing to a new name for the country: the “Republic of North Macedonia.”

The deal was hard, Zaev admitted, but the fact that “the reaction from the oppositions [in both countries appeared] copied and pasted, is confirmation that we reached a fair agreement.”

Zaev conceded that the concessions were steep, but said Macedonians “believe so much in our integration in NATO and in parallel in the European Union, that we will have a new friend, our south neighbor, to cooperate together to preserve the future for citizens of both countries.”

Zaev highlighted the success of the name deal as a potential model for others in the Balkan region, which is still dealing with numerous open questions after a decade of war in the 1990s. The name dispute “was the wall between us [and Greece],” he said. “Now I think we moved mountains with this agreement. We showed to our neighbors and probably to the rest of the world, a role model for how that kind of sensitive question is even possible to solve.”

The naming question is still not resolved, however, as the Macedonian electorate will need to approve the decision in a referendum, followed by a change to the country’s constitution, and then a reciprocal ratification in Greece’s parliament. Zaev was confident that Macedonians would support the deal, especially now that NATO has signaled that it will lead to membership. “I think in this coming period, citizens from both sides will see that there will be only benefits,” he said. “NATO means [not only] stability and security, but also [a growing] economy and encouragement for investment.”

The prime minister also pointed out that after FYROM signed a good neighbor treaty with Bulgaria in 2017, trade increased twelve percent and there were several high profile cultural exchanges, providing tangible proof to his citizens of the agreement’s benefits. As for potential blocking of the deal from opposition parties or FYROM’s current president, Gjorge Ivanov (who refused to sign off on the initial name deal), Zaev believes they will not stand in the way of the deal once Macedonians vote in favor of it by “huge majorities.”

When asked if NATO was less attractive now given the ongoing disputes over burden-sharing, Zaev remarked that “member countries perhaps forget how cold it is outside the house…They must never forget [why] the Alliance is formed, to keep the world peace, to take care of our stability and security. We want to participate in that. We are a small country, [but] we want to increase our participation to build a better world for everybody.”

Zaev conceded that his country is small, but pointed to the contributions FYROM has already made to NATO missions in Afghanistan and Bosnia and Herzegovina as evidence of its willingness to do its part. He said his citizens know that “we have friends now…we are a small country and they support us. We must be a reliable partner to them, an equal partner.”

When asked about potential Russian action within Macedonia to either scuttle the name deal or prevent NATO accession, Zaev was skeptical that these actions would affect the vote. “The will of the citizens, the will of the governments, the will of the majorities in the parliaments, nobody can change it, because it is the will based on…the hope of the future of both nations, especially my nation,” he said.

Zaev was confident that his country will complete accession and become the thirtieth member of NATO, because “there is no alternative for our country [except] NATO and European Union integration.” Wilson closed the session congratulating the prime minister on his country’s historic success and thanking him for providing NATO with “a good story” on the eve of the first day of the summit.

Image: Damon Wilson (left), executive vice president of the Atlantic Council, moderated a conversation with Zoran Zaev, the prime minister of the Former Yugoslav Republic of Macedonia (FYROM), at NATO Engages in Brussels on July 11.