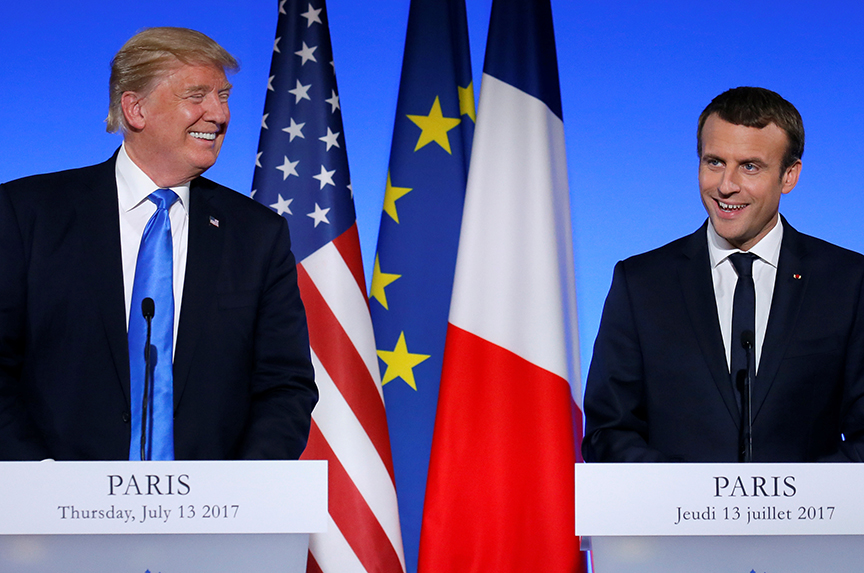 The free world (to put it in Washington wonk speak: the “rules-based, liberal global order”), the product of American leadership, which generated relative peace, prosperity, and democracy after 1945 and even more after 1989, faces aggression from without, most acutely from Russia; a long-range challenge from the rise of China; and, most alarming, doubts from within about the worth of our own system and values.

The visits to Washington this week of Europe’s two most important leaders—French President Emmanuel Macron and German Chancellor Angela Merkel—take place against this background and the context of favorable but vulnerable economic growth (see the International Monetary Fund’s (IMF) World Economic Report just out). The big question in this week’s talks is whether Europe’s leaders can influence US President Donald J. Trump to accept the value of the free world—America’s own creation—and not to trash it in favor of, ironically, the sort of Old European Great Power nationalism which brought ruin in the twentieth century.

Macron gave a stirring defense of the free world in a speech last week to the European Parliament. Without naming names, he identified himself with deeper democratic values and took on the nationalist ideology now seemingly on the rise in Europe and the United States. Substantively worthy, that also allows Macron to place French ambition in a broader context, thus advancing French interests in ways that can capture broader international support. US presidents used to know how to do that. At the same time, in a worthy show of tactical cunning, Macron has cultivated relations with Trump, who may find appealing Macron’s sense of show and comfort with power, including its use in Syria.

Macron may cover this ground in his public remarks, seizing the conceptual high road in ways US presidents habitually did in Europe for decades. Merkel is not usually a giver of stirring speeches but is equally attached to the post-World War II free world order and has plenty of reasons—historical and political—to fear the nationalist alternative. Germany has the greater power to advance this agenda, so the Macron-Merkel combination constitutes a pillar of the West, filling a leadership vacuum at a time of US strategic ambivalence.

The week’s substantive agenda will be packed, with the big questions of strategy underlying these and other particulars:

— Will the United States start to pull out of the Iran nuclear deal (the Joint Comprehensive Plan of Action or the JCPOA) on May 12, the deadline for waiving sanctions under the deal?  Merkel and Macron will try to convince Trump not to, and that combined Western pressure on Iran is more effective if we stick together to follow a menu of pressure and sanctions while sticking with the JCPOA and with each other, rather than flying apart.

— How can we best maintain pressure on Russian President Vladimir Putin to pull back from his aggressive course? Putin has befriended nationalists throughout the West, and their electoral success risks convincing Putin that time is on his side and that the West cannot sustain its cohesion. What combination of resistance, dialogue with the regime, and outreach to Russian society can best position us to thwart Russian predatory behavior now, the better to achieve better relations with a better-acting Russia later?

— Can Merkel and Macron influence Trump to respect the value of a rules-based international economic order? Can we agree to manage transatlantic trade differences, relatively minor, the better to deal with the greater potential challenge from China?  The IMF’s report addresses problems in ways that speak to some of the Trump administration’s core concerns, such as stresses generated by shifts in the manufacturing sector, and suggests ways to address them, taking advantage of currently favorable economic conditions.

Europe’s two strongest leaders may be trying this week to do for America what Americans have been doing for Europe over decades: recalling us to ourselves and pointing the way ahead for the West and the world’s great democracies. We ought to be listening.