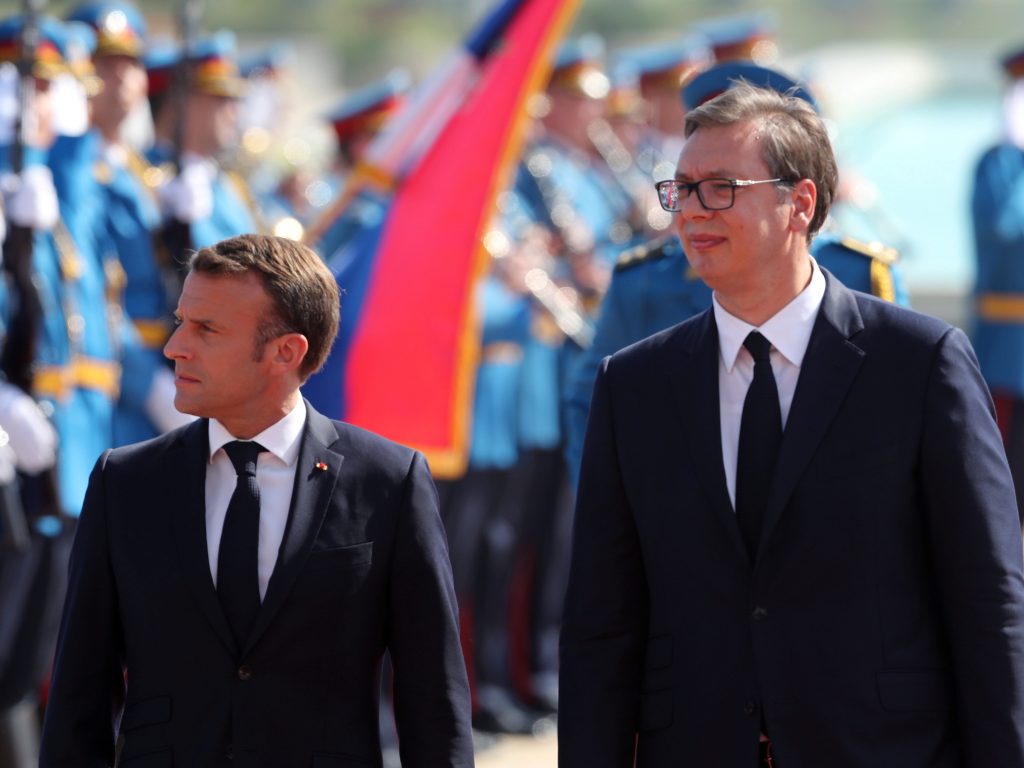 French President Emmanuel Macron visited Serbia on July 15, the first such visit of a sitting French head of state since former President Jacques Chirac in 2001, only months after the fall of the regime of former Serbian President Slobodan Milošević. While the international landscape has seen dramatic shifts in the two decades since, including a return of great power politics, the European Union’s attitude toward the Balkans has changed less than many might think. While Serbia and Montenegro have opened EU accession talks with Brussels, the region seems as distant from the EU as ever.

France lies at the heart of the EU debate about enlargement to the region, as it is one of the member states most reluctant about opening accession negotiations for candidates North Macedonia and Albania. His reservations are shaped by the opposition to further EU enlargement in the entire French political establishment and the vast majority of voters. Frustratingly for Kosovars, France even opposed visa liberalization for Kosovo, a right that the EU has already extended to rest of the Balkans, as well as countries with far gloomier EU prospects, such as Moldova and Ukraine.

As expected, Macron’s visit to Belgrade therefore attracted considerable attention and Serbian media provided live minute-by-minute updates. Many claimed that Macron’s trip marks “the return of France in Balkans,” though many in Belgrade also said the same thing a few years earlier, when former French president François Hollande seemed semi-interested in the region. While Serbian President Aleksandar Vučić clearly basked in the glow of an endorsement by the French president, the Serbian opposition were less than impressed, as they were unable to meet Macron, who claimed that their request “came too late.”

Overall, the visit appeared designed to meet a number of broader goals.

First, it appeared to be primarily a fence-mending exercise. The trip was heavy on World War One symbolism and marked the centenary of the Armistice. Last year, when Macron invited global leaders to commemorate the ending of World War One in Paris, Kosovar President Hashim Thaçi was placed in the front stands, just behind the leaders of France, Germany, Russia, and the United States. Meanwhile, Vučić was placed in a separate stand across the street, infuriating Serbs, and leading to a French monument in Belgrade being defaced.

Months later, when the Notre-Dame cathedral in Paris was in flames, Serbian tabloids, in an explosion of schadenfreude, ran stories about how the flames were “God’s punishment” for the flying of the Kosovar flag along with several others during a November ceremony at the cathedral to mark the centenary of the end of World War One. Macron clearly wanted to heal those tensions during his visit, as he gave a very powerful speech remembering Serbian victims during World War One.

In many ways, however, the biggest development was the announcement of several defense agreements between the two countries and confirmation that Serbia had purchased French Mistral short-range homing air defense missiles, which are man-portable and highly effective against low-flying aircraft like helicopters. Needless to say, political leaders in Bosnia and Kosovo reacted strongly, especially given Serbia’s recent shopping spree of Russian weaponry. Serbia’s purchase of anti-helicopter missiles is probably more aimed against France’s NATO ally Croatia, however, which in recent years has obtained, through US donations or purchases, dozens of combat helicopters and with whom Serbia is in a real arms race.

Thirdly, Macron delivered a clear message on what he expects from Serbia regarding Kosovo: Serbia and Kosovo are both European and they need to make peace. Recalling the words of Umberto Eco, who once said that “the language of Europe is translation,” Macron urged Serbs and Kosovars to translate their past misunderstandings and build a spirit of compromise. Internationally, the statement received a lot of attention and reports suggested that Macron had pledged to restart a dialogue process between Belgrade and Pristina.

While this sounds impressive, it is less than clear whether he really has a plan to tackle the big obstacles in any Kosovar-Serbian negotiations. At present, Paris, Berlin, and Washington all agree on the aim of any dialogue: for Kosovo to become a member of the United Nations and Serbia to be offered a realistic chance towards EU membership. The trouble is that they are not on the same page regarding the specifics for how to get there.

This mixed messaging has had serious consequences in Kosovo, in particular. While President Thaçi is open to a mutually-agreed demarcation of borders, an idea that Washington has signaled it is willing to support, Kosovar Prime Minister Ramush Haradinaj* is vehemently against the proposal, supported by Germany. In between these two poles sits France, which at some points seems open to border changes and at other times opposed.

Macron avoided taking a formal position in Belgrade. Instead, he focused on trying to create the conditions for renewed dialogue, which has been suspended since last year, rather than focus on the precise outcome at this stage. In his comments, he vaguely referred to the need for “each party to abstain from unilateral and non-constructive gestures.” This could be read as a call for Kosovo to suspend the 100 percent taxes imposed on Serbian products last autumn. Equally, it could be a request for Serbia to suspend its campaign to prevent Kosovo from joining multilateral organizations. He also added that the present tensions between Kosovo and Serbia “are fueled here and there by external powers that have an interest in making sure no deal is found.”

In the days that have followed, some possible details of how talks could resume have emerged. Vučić has stated that he expects the previously scheduled but postponed Paris Balkans summit to unfold in September. Additionally, Blic, a leading Serbian newspaper, has reported that Macron intends to appoint a special envoy for peace talks, which could be a valuable development. Until now, the process has been overseen by the EU’s High Representative for Foreign and Security Policy Federica Mogherini. Both France and Germany have complained, however, that Mogherini was too thinly spread on other global issues and frequently appeared not to have the focus—nor the required staff—to deal with the Kosovo-Serbia dialogue.

Importantly, Berlin also seems to be warming to a more active European role in the negotiations. Former German ambassador to the United States Wolfgang Ischinger, the highly-respected chairman of Munich Security Forum, recently argued that since “Serbia and Kosovo have been unable to come up with an ‘indigenous solution’ to the problem…Europe needs to come up with a plan—one it can present with authority to Belgrade and Pristina. And that plan needs to be backed up with determination.”

A return to shuttle diplomacy led by France, Germany, and the United States may also be beneficial for the incoming EU high representative, Josep Borrell. As Spanish foreign minister, he currently cannot even acknowledge Kosovo as an independent state, though some believe he will play a far more constructive role than might be expected.

Compared to Iran, Ukraine, and North Korea, the Kosovo-Serbia deal is relatively low-hanging fruit for Europe and the United States. If Macron has smelled that the fruit is ripe, his visit to Belgrade may yet be remembered as a turning point for French involvement in the Balkans.

A significant problem remains for Macron. Paris may want to co-author a big diplomatic victory in the Balkans, but it has so far been unable to wield the tool that could persuade Kosovo and Serbia to ‘translate their differences’ into compromise: EU accession. The payoff could be big for France, but it must first decide if it is willing to prove that the Balkans truly belong in Europe.

*Editor’s note: This piece was written prior to the news of the resignation of Prime minister of Kosovo Ramush Haradinaj on July 19, 2019.

Petrit Selimi is the former foreign minister of the Republic of Kosovo and a Marshall memorial fellow at German Marshal Fund of United States.