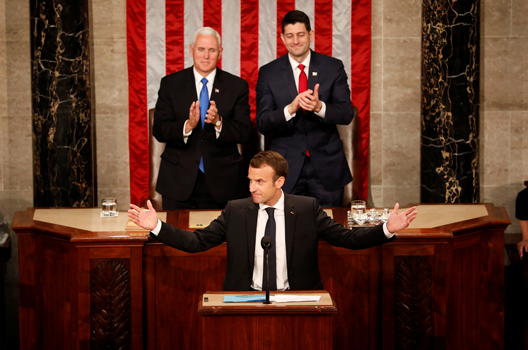 French President Emmanuel Macron on April 25 delivered a rallying cry for Western world leaders to reject isolationism and stand together in defense of democracy. The remarks appeared to be directed at US President Donald J. Trump who has embraced an America first worldview.

“It is a critical moment,” Macron said in his address to a joint session of the US Congress, adding, “closing the doors to the world will not stop the evolution of the world.”

“Today, the international community needs to step up our game, and build a twenty-first century world order, based on the perennial principles we established together after World War II,” the French president said.

Through a combination of moving mantras and tongue-in-cheek critiques, Macron set forth a vision for that new world order, based on international cooperation and collaboration. “We can strengthen the new world order [with] a new breed of multilateralism,” he said.

Macron delivered his speech after two days of private meetings and public appearances with Trump who hosted the French president for his administration’s first official state visit.

Though France and the United States have taken opposing policy positions on a number of international issues, Macron has managed to maintain a positive and collaborative relationship with Trump, more so than many of his European counterparts.

In his address, Macron surveyed the issues which have caused disagreements between Europe and the United States—from trade to climate change to the Iran nuclear deal—and set forth a roadmap for future transatlantic cooperation on these issues.

“Going beyond our bilateral ties, beyond our very special relationship, Europe and the United States must face together the global challenges of the century,” Macron said. He added: “We cannot take for granted our transatlantic relationship.”

“I believe in concrete action,” he asserted. “I believe the solutions are in our hands.”

Here is what the president of France had to say on the issues:

“Commercial war is not the proper answer to these evolutions [economic challenges]. We need free and fair trade.”

To address the issue of trade deficits, Trump imposed sweeping tariffs on steel and aluminum exports to the United States on March 8. This caused outrage and threats of retaliation from European partners.

However, Trump granted temporary exemptions from the tariffs to the European Union (EU), Brazil, Argentina, Australia, and South Korea. Those exemptions are set to expire on May 1.

Macron cautioned that “at the end of the day, [a trade war] will destroy trade, increase prices, and the middle class will have to pay for it.”

Instead, he urged Trump to seek reparations for trade imbalances “by negotiating through the World Trade Organization.”

“We wrote these rules,” said Macron, adding, “we should follow them.”

“I hear the concerns [about climate change], but we must find a transition to a low-carbon economy… Let’s face it. There is no Planet B.”

When Trump announced his decision to pull the United States out of the Paris Climate Accord in December 2017, Macron responded immediately by inviting US scientists to continue their work on climate change solutions in France.

The United States remains one of two nations—Venezuela is the second—which has not subscribed to the terms of the Paris deal. Acknowledging their opposing points of view, Macron called for the United States to re-enter the discussion and play a role in the solution.

“On this issue, it may happen that we have disagreements,” he said, adding, “that is for me a short-term disagreement. In the long run, we will have to face the same realities.”

According to Macron, “beyond the short-term disagreements, we have to work together… in order to make our planet great again and create new jobs and new opportunities, ones safeguarding our Earth.”

“I am sure, one day, the United States will come back and join the Paris Agreement,” he said.

“As for Iran, our objective is clear. Iran shall never possess any nuclear weapons. Not now, not in five years, not in ten years. Never.”

On April 24, Macron set forth a plan for a new deal to contain Iran’s nuclear activity during a joint press conference with Trump.

Since his campaign, Trump has denigrated the existing Iran nuclear deal—the Joint Comprehensive Plan of Action (JCPOA)—calling it a “very bad deal,” and claiming he would rip it up. Those threats have ratcheted up tensions between Washington and Tehran.

“It is true that the agreement does not address all concerns,” said Macron. However, he added, “we signed it at the initiative of the United States. That is why we cannot say we should get rid of it.”

“France will not abandon the JCPOA, because we signed it,” said Macron.

On January 12, Trump once again certified Iran’s compliance with the terms of the deal and waived sanctions, saying it would be the last time he did so unless there were substantial changes made to the terms of the deal. He gave the US Congress and European allies five months to see that his terms were met.

That period is up on May 12, and Trump has left all sides wondering whether or not he will once again wave sanctions or toss out the deal. Macron’s plan for a new deal seems to provide an answer that might appease all sides. He has based the plan on four pillars: “the substance of the existing agreement… the post-2025 period to be sure we will never have any nuclear activity for Iran, the containment of the military influence of the Iranian regime in the region, and the monitoring of [Iran’s] ballistic activity.”

Macron called for the United States to stay committed to the JCPOA, within the framework of his new proposed deal. “I think we can work together to build this comprehensive deal for the whole region, for our people, because I think it fairly addresses our concerns,” he said.

“We must be stricter than ever with countries seeking to acquire a nuclear bomb. France supports fully the United States in its efforts to bring Pyongyang through sanctions and negotiations to the denuclearization of the Korean Peninsula.”

Macron unequivocally supported all US efforts to neutralize nuclear threats, not only in Iran, but around the world.

Macron insisted that his proposed strategy for containing Iran’s nuclear activity should consider the interests of the wider region as well. “This containment is necessary in Yemen, in Lebanon, in Iraq, and in Syria,” he said.

However, “this policy should never lead us to war in the Middle East,” Macron said.

In particular, Macron raised the issue of a joint US-European approach to finding a solution in Syria.

“The United States and France, together with the United Kingdom, acted together to destroy chemical weapons facilities and restore the integrity of the international community. This action was one of the best evidences of multilateralism,” said Macron. “Beyond this action,” he said, “we will together work for humanitarian solution… and a lasting political solution to put an end to this tragic conflict.”

Trump has pledged to pull US troops out of Syria, but Macron has urged him not to do so, promoting the idea of further military cooperation to bring the conflict to a close. “Let us not repeat past mistakes in the region,” he cautioned.

“Better than anyone, our troops know what the alliance and friendship between our countries means,” said Macron.

Ultimately, Macron set forth a vision for a multilateral approach to solving the most pressing challenges facing the world today and called on the United States to step up to the plate and take its place on the global stage.

He said: “The United States is the one who invented this multilateralism. You are the one, now, who has to help to preserve and reinvent it.”

“Facing all these challenges… our duty, our destiny, is to work together and build this strong, new multilateralism,” he said.

In a final rallying call for action, Macron said: “Today, the call we hear is the call of history. This is a time of determination and courage. What we cherish is at stake. What we love is in danger. We have no choice but to prevail. Together, we shall prevail.”