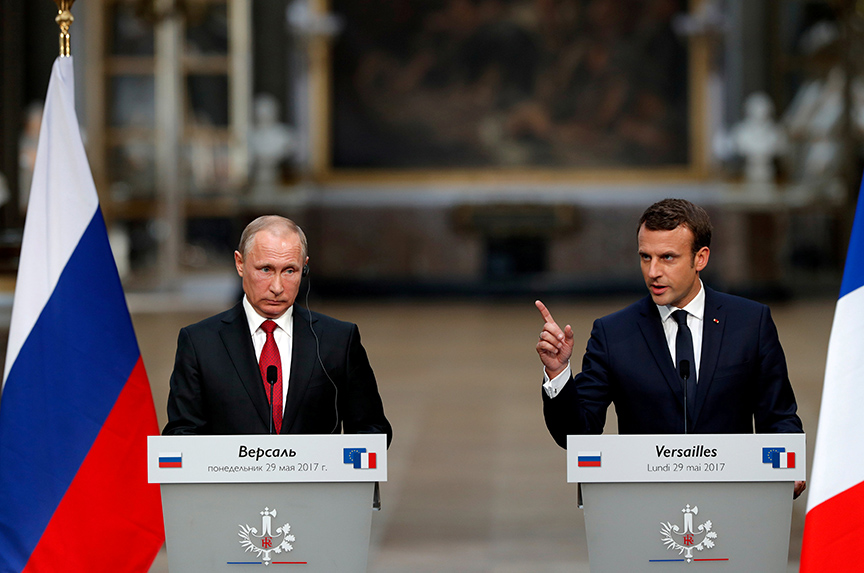 Even before entering the Élysée Palace, Emmanuel Macron had largely earned his credentials as firm on Russia.

Macron was the target of a Russia-sponsored smear campaign, which included personal attacks, during the presidential election earlier this year. That moment in the campaign is described by people working with Macron as a turning point. Where Macron may have held mostly pragmatic views about Russia before, those views hardened, according to these people.

There was, therefore, little surprise at the bravura of Macron’s blunt language during his joint press conference with Russian President Vladimir Putin at the Palace of Versailles on May 29 when he declared that Russian state-sponsored media, Russia Today and Sputnik, were more akin to propaganda machines than media outlets. Macron’s repeated condemnation of Russia’s illegal annexation of Crimea, his exchanges with Ukrainian President Petro Poroshenko, and his stated intent to make the Minsk agreements deliver positive change on the ground, do not leave any room for doubt about where he stands on Russia’s actions.

On all this there is some continuity between Macron and his predecessor, François Hollande, as well as a sharing of views held in Berlin, at least at the Chancellery. However, behind the appearance of continuity, there are signs of profound change—one where Macron’s realism on Russia morphs into realpolitik.

Indeed, it was telling to see Macron reading from carefully crafted notes, including to respond to a journalist’s question during his joint press conference with Poroshenko in Paris on June 26. While the French president was unambiguous about condemning the annexation of Crimea, he struck a more nuanced tone on eastern Ukraine where Russia is backing separatists. He abstained from explicitly naming Russia as a warring party, instead hinting that both sides in the conflict have to make some effort, starting with sharing more information, and stop blaming one another.

There is a marked difference in tone and substance from German Chancellor Angela Merkel who has led the Minsk process. While Merkel never misses an opportunity to call on all parties to work toward peace, she also underlines that Russia is the one that must make the first move. There cannot be a political solution, including elections in the Donbas, without a clear improvement in the security environment. Russia holds the key to security in the east and can escalate at will as long as it controls Ukraine’s eastern border.

The difference in tone emerged in the wake of Macron laying out elements of what his foreign policy doctrine might look like. Answering questions from eight leading European newspapers ahead of his first EU summit on July 22-23, Macron took some positions that marked clear shifts away from that of his predecessor’s. First, he appeared to hint that the Assad regime could be part of stabilizing Syria. He added that his preoccupation is to avoid a failed state in Syria and fight terrorist groups; something that has left many experts intrigued given that by all humanitarian, security, and economic counts Syria is already a failed state. This point may have been intended to signal to Moscow that France is willing to respect Russia’s interests in Syria. Second, the president doubled down on a statement he made during his campaign that sending French troops abroad doesn’t bring political solutions and diplomacy should take precedence instead of a neoconservative, i.e., militaristic, approach to solving crises. While careful to draw some red lines, like on the use of chemical weapons, the thrust of Macron’s nascent doctrine amounts to an angelic version of realpolitik. Interestingly, where Macron is unambiguously an agent of change on economic and European policies, he seems to take a more conservative approach to foreign policy. Here there is a parallel with former US President Barack Obama who was a reformer on many counts, but had a narrower vision of his foreign policy interests.

Where does Russia fit in Macron’s worldview? As always with Macron, there is an elegant but complex logic to it. Macron’s calculus on Russia is likely based on three factors.

First, the United States cannot be relied upon to follow a predictable strategy on Russia. US President Donald J. Trump may have wanted his own Russia reset, but embroiled in a special investigation and with Congress stepping up pressure on Russia with sanctions, his room for maneuver is considerably limited. Mixed signals from Washington on Russia, but little change in the overall policy, is likely to prevail for the foreseeable future. This means that Europe is more or less on its own facing Russia.

Second, Berlin, where Merkel has been holding a firm line on Russia over the past three years, has reached its limits. There has been minimal progress on the Minsk agreements and Merkel is facing growing pressure from her coalition partners and German business lobbies to soften the line on Russia.

And third, Macron is new to foreign and security policy, but no doubt a quick and able learner as he has shown in his first appearances on the international scene. Apart from his European policy, which is an extension of his domestic reform agenda, the one security and foreign policy priority that matters for Macron is the instability in the Middle East and North Africa. This is, after all, a region from where France faces its greatest threats: a dangerous mix of illegal immigration and terrorist groups. It is also where France has extensive interests due to its post-colonial history and the presence of its military forces. But it is also a region where little can be achieved, especially at the United Nations, without Russia’s consent. Therefore, the logic goes, a modicum of stability in troubled hot spots like Syria or Libya can only be restored if the West works better with Russia. Macron made that point very clear in his wide-ranging interview to eight leading European newspapers.

As for many of his policies, Macron draws on his own experience as an adviser and later economy minister under Hollande, but also as an attentive observer of the Sarkozy presidency, as models of what not to do. This is true of his predecessors’ approaches to Russia. In Nicolas Sarkozy’s case, the open-arm policy of strategic cooperation with Russia, going as far as selling to Moscow two sophisticated French helicopter carriers [the contracts were later cancelled and the carriers sold to Egypt]. In Hollande’s case, it is the inexorable sliding into a containment policy with little prospect for better relations.

Drawing on his personal experience, having felt the disruptive Russian hand during the presidential campaign, Macron seems to hold few illusions about Putin’s Russia. Everything points to the fact that, unlike Trump, Macron has understood that unlocking the relationship with Russia cannot be done at the expense of Ukraine. But looking at the foreign crises that his predecessors left in his inbox, he also knows that cooperation with Russia is a necessity, not an option. This is reinforced by a tradition in French diplomatic circles often called Gaullist-Mitterandian, in reference to the two French presidents of the Fifth Republic—Charles de Gaulle and François Mitterrand—who sought to maintain French autonomy regardless of its alliances, and an equidistance from Washington and Moscow.

However, the weakness in Macron’s approach is that Putin knows he holds some of the cards Macron needs in Syria, while Macron seems reluctant to give himself new cards to push Putin to change his behavior on Ukraine. The idea of strengthening European Union sanctions in light of Russian aggression in Ukraine and human rights abuses draw immediate negative reactions in Paris. So does the idea of strengthening NATO allies’ defense deterrence posture beyond what has been agreed to at the Wales and Warsaw summits. The Macron method, as presented by the president himself during his joint press conference with Poroshenko, of achieving small but concrete results on Minsk without raising the cost of failure if Russia is unwilling to move is more akin to wishful thinking. The French president seems to believe that the Macron effect will be enough to compel Putin to make some compromises in Ukraine. But even if the Macron effect did achieve one of the most formidable political wins of a generation against all odds and predictions, it is unlikely to impress an interlocutor as cynical as Vladimir Putin.

Fabrice Pothier is a nonresident senior fellow in the Atlantic Council’s Brent Scowcroft Center on International Security. He also leads a project on Ukraine at Rasmussen Global. You can follow him on Twitter @FabricePothier.