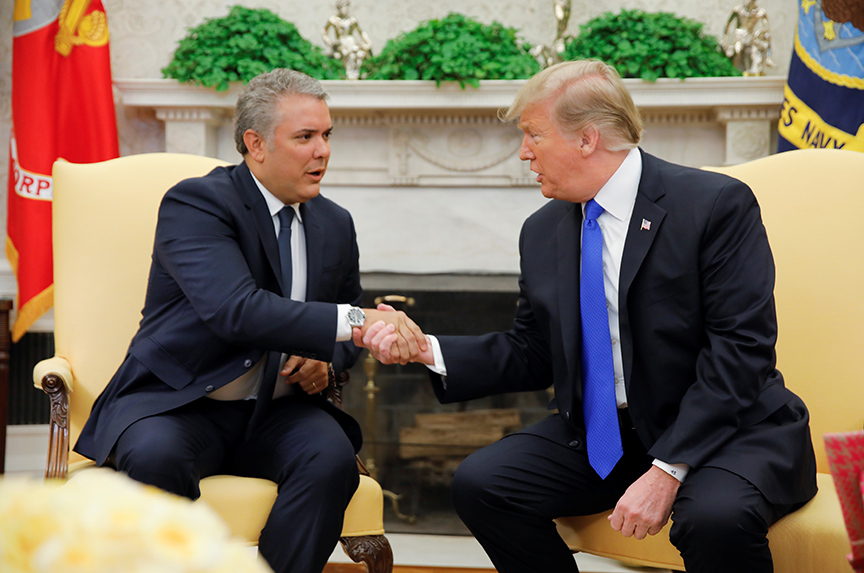 Colombian President Ivan Duque said on February 14 Nicolás Maduro should relinquish his hold on power in Venezuela and face trial for crimes against humanity. He also called on the Venezuelan military to support Juan Guaidó, who is recognized by a number of countries, including the United States, as the interim president of Venezuela.

“His days are over,” Duque said, referring to Maduro. “Now, the military, who are the ones that have to make the change… they have now to support President Guaidó. What is the other option? Continue with a dictatorship that has impoverished the whole population; a hyperinflation of millions; the deterioration of all the liberties?”

“Juan Guaidó is not only the option to enter into a democracy, he is the option to re-establish liberties and hope for the Venezuelan people,” said Duque, adding, “The military has to receive that message and it has been prudent that the National Assembly has offered differentiated treatment for the people that support this transition in Venezuela.”

“I believe that this is the right moment for the dictatorship to end,” Duque said in a conversation moderated by CNBC contributor, Michelle Caruso-Cabrera, at an event jointly hosted by the Atlantic Council in Washington.

The Venezuelan military’s support has been critical for Maduro to retain his grip on power. In an effort to erode this support, Venezuela’s National Assembly has offered an amnesty to civilian and military officials who “collaborate with restoring constitutional order in Venezuela.”

On the question of whether he would support amnesty for Maduro, Duque recalled that as a senator he had denounced Maduro before the International Criminal Court.

The Colombian president proceeded to offer a vivid scenario to explain his position. “Imagine,” he said, “that you’re living in a condo and your neighbor next door, every night, is beating his wife and his children. So what’s the moral attitude? Just wake up in the morning and meet the guy in the elevator and pretend everything is OK? No, it is the moral duty to denounce.”

“Amnesty for Maduro for me is not an option,” said Duque, adding that the Venezuelan should be tried in the International Criminal Court.

The United States and about two dozen other countries recognize Guaidó as the interim president of Venezuela. Russia, China, and Turkey are among the countries that continue to support Maduro.

Venezuela has been gripped by a crisis marked by hyperinflation, dire shortages of food and medicine, and political repression. As millions of people flee the country, Colombia has taken in a significant portion of the migrants leaving its eastern neighbor.

The United States has also offered $20 million in humanitarian aid to Venezuela, but Maduro has refused to let this aid into the country all the while denying the existence of a crisis. Duque said Colombia will receive humanitarian aid from any country that wants to help the Venezuelan people.

While aid has arrived at Cucuta, on the Colombia-Venezuela border, freight containers have been used on the Venezuelan side to block the bridge connecting the two countries.

In his meeting with US President Donald J. Trump at the White House on February 13, Duque described obstructing access to humanitarian aid as a “crime against humanity.”

Trump and Duque issued a joint statement in which they affirmed their commitment to “taking steps to resolve the ongoing democratic and humanitarian crisis in Venezuela” and called on countries around the world to support Guaidó.

“Both countries will work with the Guaido government to restore freedom, democracy, and prosperity to Venezuela,” the statement said, adding, “The United States and Colombia stand side by side with many other nations in the face of any provocation by the illegitimate, former dictator of Venezuela, Nicolas Maduro, and those who work on his behalf to undermine the security and safety of the region.”

In an effort to choke off a critical lifeline for the Maduro regime—oil revenue—the Trump administration on January 28 imposed sanctions on PDVSA, Venezuela’s state-owned oil company. The regime has turned to selling gold.

Trump has not ruled out military intervention to deal with the crisis in Venezuela.

Asked by a reporter whether he was considering sending 5,000 US troops to Colombia—a reference to a note seen scrawled on National Security Advisor John Bolton’s notepad during a January 28 news conference—Trump responded: “You’ll see.”

At the event on February 14, Duque talked about his government’s counternarcotics efforts and determination not to restart peace talks with the National Liberation Army (ELN), an armed group considered a terrorist organization by the United States, unless it releases nineteen hostages and ends its attacks. ELN is blamed for a January 17 car bombing near a police academy in the Colombian capital, Bogotá, which left more than twenty people dead.