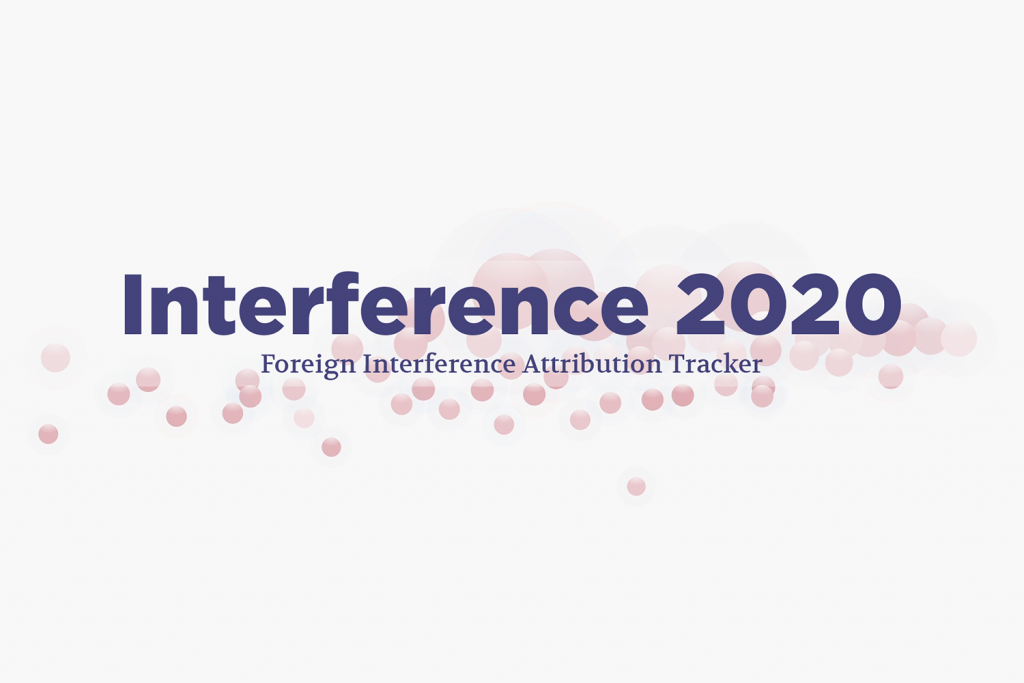 As the US presidential election approaches, allegations of foreign interference have risen sharply. These claims have originated from US intelligence agencies, technology companies, and both political campaigns and senior political appointees serving in the current US administration. According to the Atlantic Council’s Digital Forensic Research Lab’s (DFRLab) analysis, there have been at least ten major foreign interference claims made in the month of September alone, each alleging different actors and different methods and objectives. These claims vary widely in their evidence and objectivity. Sometimes, they even contradict each other.

US citizens are closely attuned to this issue. According to an August 2020 Pew survey, 75 percent of Americans believe that a foreign government will try to influence the 2020 election, with 62 percent of respondents describing it as a “major problem.” Even with many Americans paying attention, however, the volume of foreign interference claims has made it challenging for citizens to grasp the current reality of the problem. It has also made it more difficult for policymakers to respond to it, as well as for journalists to summarize and contextualize every instance or allegation of foreign interference adequately.

In order to address these concerns, the DFRLab is proud to launch its Foreign Interference Attribution Tracker (FIAT). This tool is an interactive, open-source database that captures allegations of foreign interference relevant to the 2020 election. It assesses the credibility, objectivity, evidence, transparency, and impact of each claim. FIAT currently tracks sixty-five cases involving seventeen foreign nations. Both the tool and accompanying documentation can be accessed at interference2020.org.

This project builds public attribution standards, provides an independent and reliable record of foreign interference in the 2020 election, serves as a resource for stakeholders about the evolving threat, and helps to build public resilience against future foreign interference efforts and disinformation. It has been created in service of the DFRLab’s mission to identify, expose, and explain disinformation and to promote objective fact as the basis for governance worldwide.

FIAT will be regularly updated as further allegations of foreign interference in the 2020 election are made public. In the weeks to come, the DFRLab will be adding further functionality to the tool in order to build an enduring resource for both the disinformation research community and the general public.

How cases are selected:

In order to be included, cases must fulfill three criteria:

First, cases must involve allegations of foreign interference by primarily digital means. The Australian Government Department of Home Affairs defines foreign interference as activity by a foreign actor that is “coercive, corrupting, deceptive, or clandestine” in nature, distinguishing it from the more benign phenomenon of foreign influence. By focusing expressly on digital activity, this definition denotes a range of interference activities—including disinformation, media manipulation, and cyber intrusion—that are conducted by foreign actors to affect political outcomes.

Second, cases must be novel. A novel case involves either a unique and newly arisen foreign interference claim or reveals new evidence to reinvigorate an old one. A novel case is also one in which significant newsworthiness is attached to the individual or organization making the claim. In general, a president or ex-president’s claim is novel regardless of the evidence presented. Meanwhile, an op-ed or report by a mid-level US official is only novel if it contains previously undisclosed information.

Third and finally, cases must be relevant to the 2020 US election. This focuses case selection on alleged foreign interference that seems intended to influence voting behaviors, denigrate particular candidates, or engage in political or social issues of direct relevance to the election. It also bounds case selection to foreign interference claims that have occurred around or following the 2018 US midterm elections. Several cases of clandestine, globally focused online networks with tangential interest in US elections (such as operations attributed to Iran and Saudi Arabia) are included under this criteria, as they have still sought to exert some influence over US election-related discourse.

Attribution Impact measures the spread of case-related articles and content over the seven days following a foreign interference allegation. It is a sum of the cumulative Facebook engagements, Twitter shares, and Reddit engagements of relevant articles. The purpose of the Attribution Impact is to capture, in approximate terms, how much an attribution affected the US news cycle. It is possible for highly credible, well-sourced claims to have very little media impact. Conversely, it is possible for salacious, poorly substantiated claims to dominate the news cycle.

Attribution Score, meanwhile, is a framework of eighteen binary statements (true or false) intended to assess foreign interference claims made by governments, technology companies, the media, and civil society organizations. If a statement is deemed applicable, a point is awarded. If a statement is deemed inapplicable or irrelevant, no point is awarded. This scoring system is based on the experience of DFRLab experts in assessing—and making—such allegations. It is also based on a review of work produced by the wider disinformation studies community, and particularly resources compiled by attribution.news.

The Attribution Score is composed of four subsections:

By sorting, evaluating, and visualizing foreign interference allegations, FIAT enables new insights into the timing and impact of these claims. Some initial observations:

In the weeks to come, the DFRLab will share more findings from the FIAT dataset. Readers can evaluate the data themselves by visiting interference2020.org.