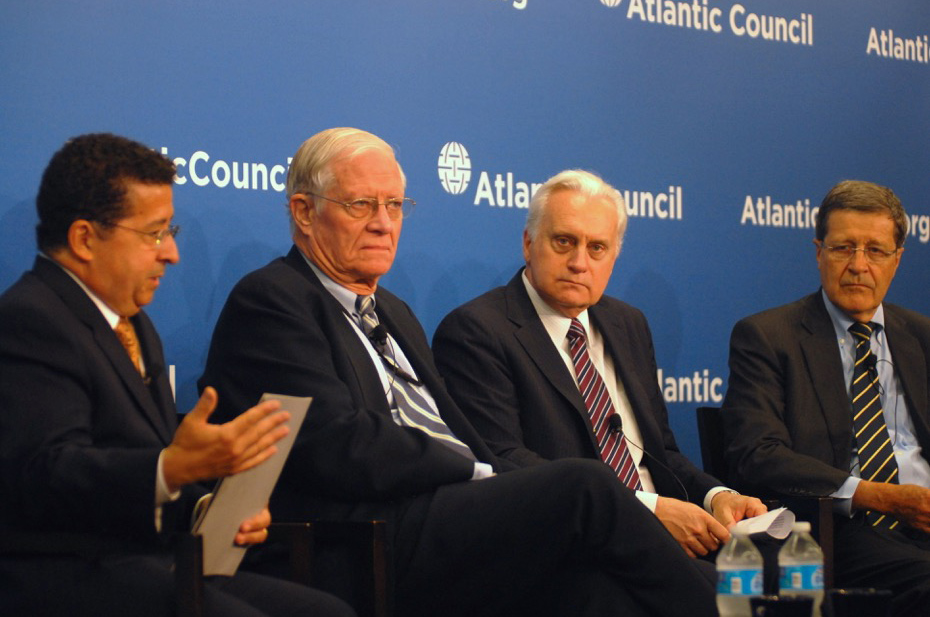 Saudi King Salman’s recent shakeup of key leadership positions in his kingdom will not affect oil production in the short term, though it may offer some clues about how Saudi Arabia will confront urgent issues such as rising youth unemployment and instability in the Gulf.

That’s the consensus of three scholars who spoke May 29 at a discussion hosted by the Atlantic Council’s Global Energy Center and Rafik Hariri Center for the Middle East.

Anthony Cordesman, who holds the Arleigh A. Burke Chair in Strategy at the Center for Strategic and International Studies (CSIS), said it’s unclear exactly what the recent changes in Riyadh’s power structure would mean for the Middle East as a whole, and for US-Saudi relations in particular.

“We have done about as well in understanding these shifts as people do in picking their fantasy football team,” he quipped. “There are all kinds of theories about what this or that leader will be like, extrapolating what they did in the past. People turn to one expert or another. Characterizing the royals is almost an ongoing sport.”

On April 29, Salman replaced Crown Prince Muqrin bin Abdulaziz, naming 55-year-old Prince Mohammed bin Nayef, who is Interior Minister, as next in line to the throne. In addition, Salman appointed his son, Prince Mohammed bin Salman, as Deputy Crown Prince, and relieved Foreign Minister Prince Saud al-Faisal, who had held that job since 1975.

Al-Faisal’s replacement at the helm of Saudi Arabia’s foreign policy is Adel al-Jubeir, who until the recent reshuffling was Riyadh’s Ambassador in Washington.

Few diplomats would question al-Jubeir’s credentials, said Cordesman, “but he is not a member of the royal family. When the first real crisis arises, what will the Foreign Minister’s role prove to be? That may be a matter of influence as much as a matter of competence. In the real world, that’s what happens when you have a shift in leadership.”

On the plus side, he said, “it was really time you had a younger prince—and he’s really not that young—made Crown Prince. In the case of Mohammed [bin Nayef], you have somebody who has proven his capability in what today is the kingdom’s most critical focus: internal security.”

Francis Ricciardone, Vice President and Director of the Rafik Hariri Center, and Jean-Francois Seznec, Adjunct Professor of Georgetown University’s McDonough School of Business, joined Cordesman on the panel, which was moderated by David Goldwyn, Chairman of the Atlantic Council Energy Advisory Board.

The discussion took place the same day a suicide bomber blew up a Shia mosque in the eastern Saudi city of Dammam, killing at least four people; the Islamic State of Iraq and al-Sham (ISIS) claimed responsibility for that attack. Only a week earlier, a similar bombing of a Shia mosque in the Saudi village of al-Qadeeh claimed twenty-one lives.

As ISIS steps up its reign of yearlong terror across Iraq and Syria—and now, apparently, Saudi Arabia—Saudi warplanes continue to pound targets in neighboring Yemen, in an effort to oust Houthi rebels backed by Iran.

The kingdom has placed $90 billion in new arms orders from the United States alone over the next three to five years.

“When it comes down to actually allocating money, that’s going to be a critical issue,” Cordesman said. “If I had been suddenly shifted from Crown Prince to King, I would have done something very similar and done it very quickly.”

As part of Salman’s shakeup, state-run oil conglomerate Saudi Aramco is being separated from the oil ministry under a ten-member council headed by the King’s son, Prince Mohammed bin Salman.

In addition, Salman appointed Saudi Aramco’s CEO, Khalid al-Falih, as Chairman of the company and Minister of Health—possibly allowing a prince to be named the next oil minister to replace 79-year-old Ali al-Naimi, who has been wanting to retire for years.

“He’s still Minister of Petroleum and Minerals, but oil will no longer be handled by that ministry,” said Seznec, noting that al-Faria’s position at the helm of Saudi Aramco is totally technocratic. He added that al-Faria is known for leading the company’s foray into petrochemicals, which is now a $20 billion enterprise.

“The board of directors [of Aramco] doesn’t have a single prince,” said Seznec, whose research enters on the influence of Persian Gulf social variables on the region’s oil and financial and oil markets. “There’s much too much emphasis on what the royals do and who they are. Nothing much has changed. Therefore, I don’t expect oil policy to change much either.”

Cordesman said one of Saudi Arabia’s biggest problems is its looming unemployment crisis.

“The unemployment rate for youth and women is more than twice the rate of men. That’s a lot of talent that isn’t being used,” Cordesman said. “There’s an amazing lack of correlation globally between education and job creation. Education for jobs when the economy is creating them is valuable, but education for the sake of education has almost no historical impact in moving countries toward development. The kingdom has to face this.”

Image: From left: David Goldwyn, a Nonresident Senior Fellow in the Atlantic Council's Adrienne Arsht Latin America Center and Chairman of the Council's Energy Advisory Board, moderates a May 29 panel at the Atlantic Council on Saudi Arabia’s leadership changes with Anthony Cordesman, Arleigh A. Burke Chair in Strategy at the Center for Strategic and International Studies; Francis J. Ricciardone, Vice President and Director of the Atlantic Council’s Rafik Hariri Center for the Middle East; and Jean-Francois Seznec, Adjunct Professor at Georgetown University’s McDonough School of Business. (Atlantic Council/Larry Luxner)