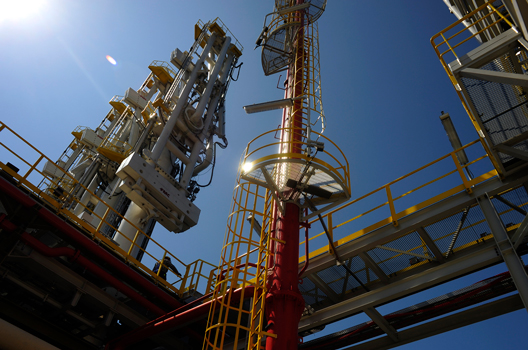 In light of Russia’s use of energy as a weapon in Europe, the Three Seas Initiative—a project designed to unite the region of Europe between the Baltic, Adriatic, and Black Seas through energy infrastructure—should be a strategic priority for the new US administration, retired Marine Corps Gen. James L. Jones, chairman of the Atlantic Council’s Brent Scowcroft Center on International Security, said at the Council’s Istanbul Summit on April 28.

“This is a truly transatlantic project that has enormous geopolitical, geostrategic, and geo-economic ramifications,” said Jones, who served as national security advisor in the Obama administration. Consequently, he contended, “we need to cultivate the new American administration’s interest.” By strengthening the Three Seas region, and by extension all of Europe, the initiative will strengthen the entire transatlantic community, he said.

The Three Seas Initiative aims to unite the twelve European Union countries in Central and Eastern Europe by creating a North-South infrastructure in the telecommunications, energy, and transportation sectors. While not directly punitive toward Russia, according to Jones, the initiative is designed to alleviate the Kremlin’s strong hand in the European energy sector, which Moscow has exercised to the detriment of EU member states.

In July 2017, alongside the Atlantic Council’s Wrocław Global Forum, ministers and leaders from the Three Seas countries will convene in Poland for the next summit focused on the implementation of the project. US President Donald Trump has been invited to this summit.

Jones described Trump, a self-proclaimed dealmaker, as a “transactional” president. Therefore, he said, “I don’t think it’s a heavy lift” to drum up interest in Washington.

Jones delivered a keynote address to outline the significance of the initiative, after which he joined George Ciamba, secretary of state for bilateral and strategic within the Euro-Atlantic area at the Romanian Ministry of Foreign Affairs; John Roberts, a nonresident senior fellow with the Atlantic Council’s Global Energy Center; and Michal Kobosko, director of the Atlantic Council’s Wrocław Global Forum, for a panel discussion. David Koranyi, director of the Energy Diplomacy Initiative in the Global Energy Center, moderated the conversation.

The Three Seas Initiative is “a real twenty-first century security project,” according to Jones. “It is a security project that reaches out economically to the welfare of Europe,” and facilitates the implementation of necessary energy and infrastructure projects.

According to Roberts, the Three Seas region, currently an “energy island,” must focus on building the necessary infrastructure to help the twelve countries cultivate energy independence. Currently, he said, Russia and Norway are the major suppliers of energy to Europe. However, “in the event of a crisis… were either Russian or Norwegian gas to be cut off, the [current] infrastructure would not be sufficient to cope,” he said. He called for all stakeholders in the project to build the necessary infrastructure to prepare for an emergency.

Kobosko described the great strides Poland has already made to achieve these aims. Where it was once fully dependent on Russia gas, Poland is now fully independent from that source, he said. In 2015, Poland opened its first liquefied natural gas (LNG) terminal, allowing it to import LNG from a variety of external sources, and serving as an LNG entry point for the region. This terminal has thus far been wildly successful, said Kobosko, and the Polish government is now in talks to double its size and capacity. In a few weeks, he said, the terminal will receive the first-ever US LNG exports to Poland.

However, Kobosko said, Central Europe has the necessary East-West connections, but “what it’s missing are the functional North-South connections.” The government of Croatia has been in talks to build an LNG terminal in the northern part of the country, which could connect to Poland’s terminal and establish a key LNG corridor running through the Three Seas region.

However, these talks have stagnated. Both Kobosko and Roberts insisted they should be invigorated because this is “an important, doable project,” according to Roberts. “We should have two entry points” for LNG to get to Central Europe, Kobosko added.

“We need to connect the dots” in the region, said Ciamba. He said that what is more important is putting together existing initiatives under the heading of the Three Seas, adding that this is the most efficient means of integration. Roberts added that the utilization of existing pipelines and expanding current systems is preferable as well, in the interest of cost-consciousness.

On the issue of cost, “I think Brussels should be a part of [the initiative] because at the end of the day it is going to be European taxpayer money that is going to be the most appropriate form of financing,” said Ciamba.

However, Western European disinterest in the Three Seas “is visible,” according to Jones. He added that US diplomatic efforts will be crucial for bringing this project to bear.

Therefore, Jones said, “we have some work to do.”

Image: A general view shows the construction site of Poland's first liquefied natural gas (LNG) terminal, in the Baltic port of Swinoujscie July 23, 2014. Poland is building the terminal at at a cost of around 3 billion zlotys ($977.2 million). It will be able to accept 5 billion cubic metres of gas per year, with plans to expand it to 7.5 billion. Picture taken July 23, 2014. REUTERS/Filip Klimaszewski (POLAND - Tags: BUSINESS CONSTRUCTION POLITICS ENERGY)