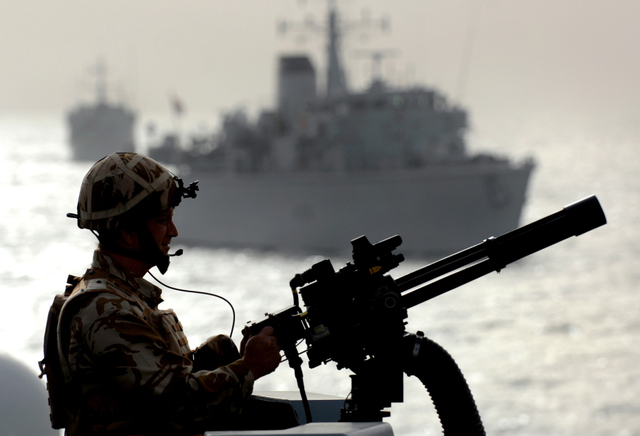 When looking at the earth from space, one fact is obvious: Water is the dominant feature. In fact, about 70 percent of the planet is covered by water and a significant portion of the earth is covered by frozen water in the Arctic and Antarctica.

Historically, great powers have been those with access to the sea, such as the United States, Britain, France, Germany, Holland, Spain, Portugal, and Japan. Countries forecast to be great powers in the 21st century also include budding seafaring nations like China, India, and Brazil. International law is critical to navigating challenges that occur on the world’s oceans.

The 1982 United Nations Convention on the Law of the Sea defines three distinct areas-territorial waters, exclusive economic zones, and international waters. Territorial waters are those under government sovereign control and legally recognized as twelve nautical miles from the low water mark of a coastal state. This zone is under the exclusive control of the state, but ships of all nations are allowed innocent passage. Beyond twelve nautical miles is the Exclusive Economic Zone (EEZ), which extends seaward to 200 nautical miles. Within an EEZ, the coastal state has special rights to use and exploit marine resources such as oil exploration, seabed mining, and fishing. The international community still enjoys the rights and freedom of navigation and overflight in the EEZ, as well as the ability to lay submarine telecommunications cables and other non-resource related uses of the oceans. Beyond 200 miles is considered international waters where all coastal and non-coastal states have equal access and enjoy the freedom of the seas and other activities.

In spite of clearly defined boundaries, maritime disputes are common where countries compete over inhabited and uninhabited islands. For example, in 1982, the United Kingdom and Argentina fought a war over islands in the south Atlantic located 300 miles from South America and 700 miles from Antarctica. The dispute stems from competing claims of what the British call the Falklands and the Argentines call the Malvinas. Both claims are rooted in centuries-old colonial claims made by the British and Spanish (but governed from Buenos Aires, Argentina).

Relations between Argentina and the United Kingdom normalized in the 1990s, but with the prospect of new hydrocarbon resources discovered near the south Atlantic islands, the Argentine government challenged the United Kingdom’s claims again in 2007. Venezuela’s President Hugo Chavez seized upon the issue to promote South American unity. In February 2010, he told Queen Elizabeth II, “The time for empires are over, haven’t you noticed? Return the Malvinas to the Argentine people. Things have changed. We are no longer in 1982. If conflict breaks out, be sure Argentina will not be alone like it was back then." In spite of Chavez’s threat, the British seem to have international law on its side. The British first claimed the islands in the sixteenth century, 70 percent of the islands’ inhabitants claim British ancestry, and the islands are a self-governing British territory.

In Asia, there are numerous similar competing claims over the largely uninhabited Spratly Island chain, which are dispersed over a 600-mile area in the South China Sea. To date, China, Taiwan, Vietnam, the Philippines, and Malaysia have overlapping claims. Brunei also established a fishing zone in the Spratly Island chain, but has made no formal claim. The islands are little more than exposed reefs that are barely above sea level and total about four square kilometers. In spite this, the seabed contains important hydrocarbon deposits. Because of this and historic rivalries (China and Vietnam) and political difference (China and Taiwan) among the countries, the Spratly Islands are often characterized as a potential flashpoint. Yet, no significant military action has occurred. Instead, national oil companies from China, Vietnam, and the Philippines signed a joint accord in 2005 to further seismic exploration of Spratly Island chain.

Given the uncertain impact of China’s rise on international affairs, maritime disputes like those in the South China Sea offer a window into Beijing’s decision-making. So far, China seems to rely on international law to further its claims (though there are clear cases of harassment and limits). Law Professor Xinjun Zhang of Tsinghua University recently wrote for FPRI,

On balance, international law has come to be seen as a more important and necessary means for China to achieve its foreign policy ends, even though obstacles and uncertainty persist. Moreover, China’s turn to international law has been uneven, and unsurprisingly so. International law is more likely to be an appealing instrument for China where the other party to a dispute is a near-peer in political, economic and military power (as is the case, for example, with Japan), or where the other parties are significantly less powerful than China (as is the case, for example, with the ASEAN countries).

The implications of this are clear. International law can be an effective way to peacefully resolve maritime disputes, but only when the parties have military capabilities to make war too costly.

Derek Reveron, an Atlantic Council contributing editor, is a professor of national security affairs at the U.S. Naval War College in Newport, Rhode Island.  These views are his own.