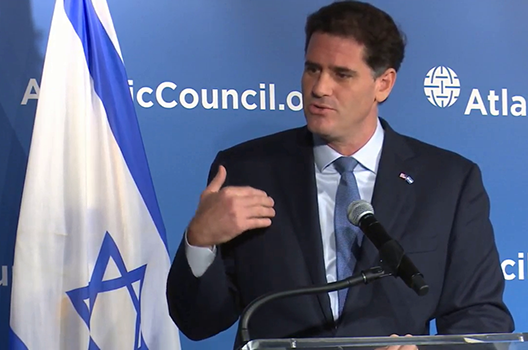 Ron Dermer, Israel's Ambassador to the United States, speaks at the Atlantic Council on July 18.

Ten years after its founding, Israel established MASHAV—Israel’s Agency for International Development Cooperation—that has over the past six decades helped nations in need.

Ambassador Gil Haskel, deputy director general of Israel’s Ministry of Foreign Affairs and head of MASHAV, recalled that the agency was born out of a trip by then-Israeli foreign minister Golda Meir to Africa in 1957. On the trip, Meir “went into the communities first hand to see what the challenges were,” and, despite the considerable economic and political obstacles facing the Israeli state, “came back with a very deep conviction to establish an international development agency.”

Contending that Israel is a unique player in international development, Ron Dermer, Israel’s ambassador to the United States, said: “We were only a decade old as a country when we were already going to Africa and elsewhere, trying to teach and help others do what we had done in Israel.”

Israel provides “a profound message of hope that in such as short amount of time, a country that had just been born is already helping others develop,” he added.

MASHAV has worked closely with the US Agency for International Development (USAID) with specific success in Africa. Celebrating MASHAV’s success, Dermer explained that for Israelis “it is hard-wired in our identity as a country and as a people not only to help ourselves, but to help others.”

J. Peter Pham, vice president for research and regional initiatives and director of the Africa Center at the Atlantic Council, noted, MASHAV was founded more than five years before USAID was up and running. Israel, Pham added, was one of the most active countries in Africa during the 1950s and 1960s, serving as a major donor and having ambassadors active in thirty-three countries.

Israel plays a unique role in development aid because, like many other developing nations, it is a relatively new country, explained Haskel. Israel was essentially a nation “established from scratch,” with no natural resources and considerable security challenges from its neighbors. Israel is “very good at doing more with less,” Dormer remarked, and this model can be very helpful for other developing nations with similar characteristics. Western nations may be able to provide much more money to developing nations, Dormer and Haskel argued, but few can provide the experience of how such a young nation “became the world’s greatest success story in development.”

Ramsey Day, the deputy assistant administrator for USAID’s bureau for Africa, highlighted several instances of close cooperation between MASHAV and USAID, especially in Sub-Saharan Africa. In December 2017, MASHAV signed a memorandum of understanding with USAID to join the United States’ Power Africa program, which is working to reduce energy poverty and increase electrification in Sub-Saharan Africa. The program, launched in 2013, has already increased access to electricity for more than 50 million people, according to Day, and will be helped by deep Israeli expertise in the field.

Day also announced that MASHAV and USAID are in the opening stages of negotiations for a “global MOU,” focusing on activities in Sub-Saharan Africa. Day specifically highlighted the potential for cooperation on water access, building on Israel’s considerable experience dealing with water challenges of its own.

Looking to the future, Day said “when we seize the opportunity to join together, and pursue promising new and innovative approaches to the development challenges of our time, such as energy and water access in Sub-Saharan Africa, the results cannot only be remarkable, but also transformative.”

The event at the Atlantic Council also included several panels with MASHAV and USAID representatives, as well as project partners, looking both at the legacy of MASHAV’s sixty years of development work and discussing the potential for new robust cooperation between the Israeli and US development agencies in the future.