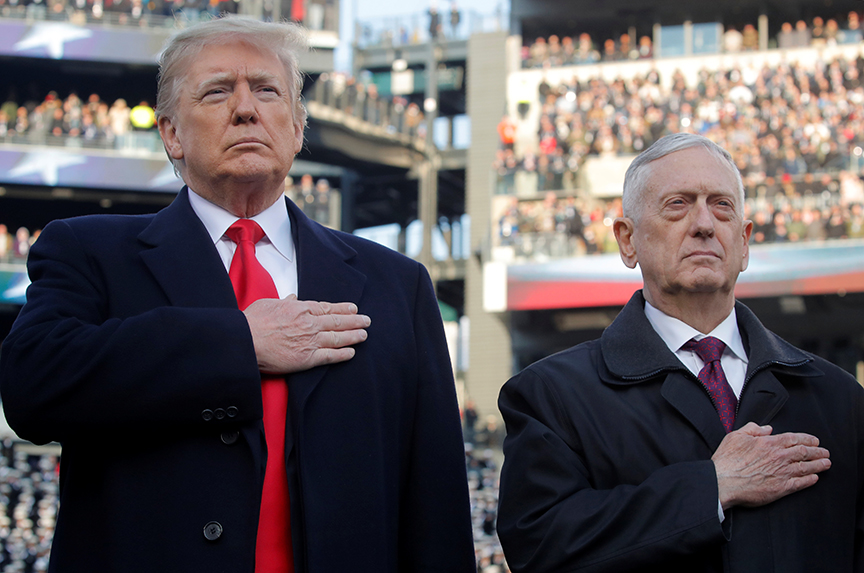 US Defense Secretary James Mattis’ departure removes the strongest Cabinet voice against dismantling the US-led post-World War II international order. Mattis’ stunning resignation letter is a historic rebuke of the policies and person who chose him two-plus years ago to lead the US armed forces.  There were disquieting trends in the Mattis Department of Defense, but there is little doubt that the outgoing secretary served the nation with distinction and was able to thwart some of US President Donald J. Trump’s worst impulses.

Of course, elections have consequences and this president, like all before and after, should have the advisers and Cabinet secretaries of his choosing.  Mattis showed great courage in articulating his reasons for departure, his love and respect for the uniformed military, and for refusing to fawn over the person, Trump, vice the president of the United States.

One of the more interesting analytic questions is what kind of secretary of defense is best for this moment in time. US Secretary of State Mike Pompeo appears to have a strong rapport with Trump.  Is “managing up” the primary mission of Trump Cabinet secretaries and senior advisers, or is standing up to, and slow rolling the president’s most egregious impulses most appropriate for the times?

Most traditional foreign policy and national security experts undoubtedly are grateful that Mattis repeatedly ignored the president’s requests for plans to assassinate Syrian strongman Bashar al-Assad, hold a gaudy military parade down Constitution Avenue, and ban LGBT personnel from the armed forces. Many of us lauded Mattis’ respect for rule of law and institutional norms when he expressed admiration for US troops, not Trump the person, during a bizarre televised Cabinet meeting in June 2017.

But there were disappointments, too.  Mattis stood with the president in ordering 6,000 active duty military personnel to the nation’s southwest border for a fake mission days before the midterm elections in November.  Perhaps this too weighed on the secretary’s mind when he decided enough was enough?

More structurally, should we be comfortable with senior leaders ignoring presidential guidance when technically legal but wholly unsound as policy (ordering the assassination of foreign leaders is not legal)?  Are we setting bad precedent or acting prudently in dangerous times?  Are we better off with Cabinet secretaries like Mattis and Rex Tillerson fending off the president, or people like Pompeo and Treasury Secretary Steven Mnuchin that adopt the president’s public persona and act decisively on his wishes?  Certainly, foreign governments normally prefer consistency of message and deed between the president and Cabinet officers.

I do hope the next secretary of defense is different from Mattis in some ways. First, I hope the next secretary is a civilian, not a current or recently retired member of the uniformed military.  Our tradition of civilian leadership of the military must be preserved, and appointing persons just out of uniform blurs that line, regardless of how capable that person may be.

Second, I hope the next secretary of defense views the job as supporting the foreign policy objectives of the United States, and not just as being a “Secretary of War,” as Mattis famously said soon after assuming office.  Of course, the primary mission of the DoD is to deter, if possible, and fight and win the nation’s wars, when necessary, but we have become a nation dangerously reliant on the US military to plan and execute missions more appropriately done by civilian arms of foreign policy institutions like the State Department and USAID.  Former Defense Secretary Robert Gates was a strong advocate for increasing funding for diplomacy.  Our next secretary of defense hopefully will do the same.

Third, I hope our next secretary of defense restores the relevance of the Office of the Secretary of Defense (OSD) in DoD planning.  Many current and former colleagues (all civilians so bias must be taken into account), bemoan the lost clout of the secretary’s vast civilian advisers. The role of civilian advisers is statutory.  Equally important, civilian advisers provide important ballast inside the Pentagon and as voices to the federal interagency and military institutions abroad. The United States is a true role model in military rule of law, and organizations like the Secretary’s Office of the General Counsel, Comptroller, and Policy demonstrate how the United States respects civilian leadership at the national level.

Our national democratic institutions are under great stress.  So many norms and barriers have been broken. Up until now, we have had a secretary of defense respectful of the law, acting within the bounds of seventy-five years of foreign policy consensus, and generally wholly adherent of the office of the presidency. Defense spending is up dramatically. Getting more for DoD relative to the rest of our finite resources for the conduct of foreign policy and national security is not the problem.  The problem in policy is “above the secretary’s pay grade.”

Mattis deserves profound praise and appreciation for leaving when he could no longer support a commander in chief bent on uprooting vital national interests.  We can only hope that the Senate will confirm a new secretary that demonstrates fealty to the Constitution and rule of law, not the individual presently occupying the White House.