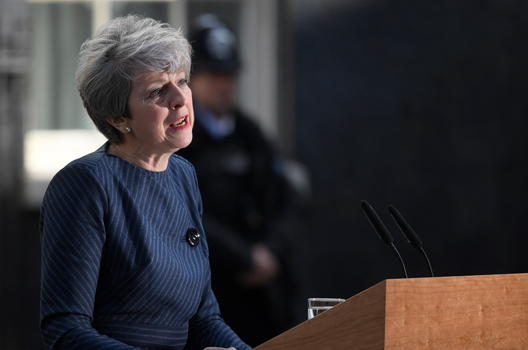 Britain's Prime Minister Theresa May speaks to the media outside 10 Downing Street, in central London, Britain April 18, 2017. British Prime Minister Theresa May called on Tuesday for an early election on June 8, saying the government had the right plan for negotiating the terms of Britain's exit from the European Union and she needed political unity in London. (Reuters/Toby Melville)

The snap UK general election called by British Prime Minister Theresa May for June 8 is likely to strengthen her political authority and ease the tortuous negotiation of Britain’s departure from the EU – provided of course she wins. All the signs are that she will.

The political climate is unlikely to be as favorable to May as it is now for a long time. With Brexit negotiations due to start later in June, May has a valid claim that she needs a personal and political mandate from the country to conduct the talks in the way she chooses. Equally important, much of the country has not yet woken up to the pain of Brexit that the negotiations will progressively reveal.

In the nine months since she took office (without an electoral mandate) after the country voted to leave the EU in last June’s referendum, May has proved an unexpectedly successful prime minister. The British economy is growing more strongly than most predicted, and she is easily the country’s most popular politician – more popular, according to one poll, than former soccer star and longtime national celebrity David Beckham.

The latest BBC Poll of Polls, an average of four nationwide surveys, gives May’s Conservatives 43 percent support, against only 25 percent for Labour, the main opposition party.

May’s most important achievement has been to reconcile most of the population – in England, if not in Scotland – to the prospect that leaving the EU is now inevitable. Outside the small Liberal Democratic Party, and a few scattered demonstrations, the 48 percent who voted to remain in the EU have kept remarkably quiet – although the Liberal Democrats will try to reawaken the cause in the election campaign.

May’s campaign has been helped by the collapse of the Labour Party under Jeremy Corbyn, its unpopular leftist leader. According to one recent poll, only 14 percent of respondents would like to see Corbyn as prime minister. And while Labour was meant to be in favor of remaining in the EU, it has not done much to oppose Brexit since the referendum.

Labour’s weakness has helped allow May to claim the mantle of the can-do political leader who will deliver a Brexit solution that most of the country can support. By reaffirming that role in an early general election, May will not only strengthen her hand in the negotiations but make herself a more credible interlocutor for the EU’s representatives. EU officials are likely to welcome such an outcome as facilitating the negotiating process.

At home, May’s aim is to win a large enough increase in the seats held by Conservatives in the 650-member House of Commons to shield her from challenges posed by extreme Eurosceptics on the right wing of her own party, who want a much sharper break with the EU than she is now envisaging. Her current slim seventeen-seat majority in parliament makes her vulnerable to pressure from this quarter, as well as from the opposition.

Removing that pressure is all the more important now that May is indicating that reality requires her to move towards the EU position on Brexit in a number of sensitive areas. She now seems to accept that the negotiations will be have to be sequenced, as the EU insists; that Britain will have to pay an “exit bill” running to billions of euros; that the European Court of Justice will maintain influence over issues involving Britain for a long time to come, and that concessions may have to be made over UK immigration policies. All these are anathema to right-wing Tories and to powerful forces in the media.

Sharp, even bitter, divisions remain over the UK’s future relationship with the EU – not over whether or not to leave, but over the terms of doing so. May hopes that victory in an election called to give her a Brexit mandate will help her overcome these divisions, and hopefully diminish the constant sniping over her performance from a wide range of political opponents in Westminster.

At the same time, an election now will remove the pressures she would face if she were to follow the established political timetable providing for a general election in 2020, the year after the country is due to leave the EU. Not only would the imminence of a 2020 election weaken her negotiating position with the EU, but the country itself is likely to be in a very bad mood as it becomes aware of the economic damage that Brexit will inflict.

What the June 8 election will not do is resolve the uncertainty over Scotland’s continued future in the UK.  Scotland not only voted to stay in the EU in last year’s referendum, but is almost totally represented at Westminster by members of the Scottish National Party (SNP), who are now calling for another referendum on Scottish independence. If, however, the Conservatives were to take a few Scottish seats from the SNP, as May hopes, they might at least take some of the wind from the SNP’s sails.