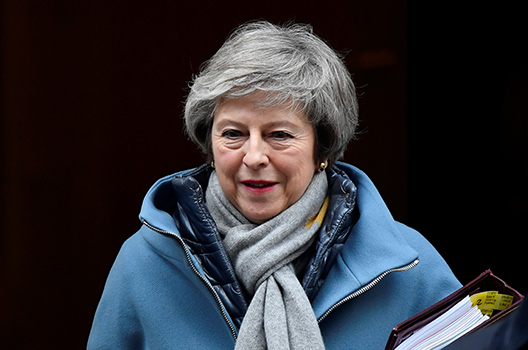 British members of Parliament will finally get a vote on Prime Minister Theresa May’s negotiated deal with the European Union setting the terms for Brexit. British government officials announced on January 7 that a vote on the deal would occur on January 15, after a similar vote was cancelled on December 11 as the government feared it did not have the votes to pass the deal.

It remains unclear whether May’s government allies have been able to convince enough MPs to support the deal. May has focused since December on trying to extract “assurances” from the EU that the Irish border “backstop”—a provision to be implemented should the EU and UK fail to agree to preserve the open border between Northern Ireland and the Republic of Ireland—would only be temporary solution. While European leaders have expressed support for May, they have remained steadfast that the backstop must remain until an open Irish border could be permanently achieved.

A solution to the Irish border question is necessary to win the support of the Northern Irish Democratic Unionist Party (DUP), which May also relies on for her majority in the House of Commons. With potentially dozens of her own Conservative MPs set to vote against her deal, May will need DUP support, as well as support from Labour MPs who have backed Brexit. May is reportedly considering a set of amendments to her deal that could win some Labour MPs over.

On January 9, May’s government released a further set of proposals to gain the support of the DUP, including provisions that would allow Northern Ireland’s Assembly to be consulted before a backstop was implemented and approve new EU regulations as part of the backstop, as well as a commitment that there would be no divergence of rules between Northern Ireland and the rest of the UK. It remains unclear, however, exactly how these provisions could be reconciled with the negotiated withdrawal agreement with the EU. DUP’s Arlene Foster has already called May’s deal “dead.”

While it already appeared unlikely that May’s deal would pass on January 15, the prime minister took another political hit on January 9 when Parliament passed an amendment requiring the government to produce a “Plan B” for Brexit should the negotiated deal fail within three business days. Earlier legislation had placed the time limit at three weeks and the new provision will allow more time for Parliament to explore other Brexit options rather than being influenced by the impending Brexit deadline of March 29. MPs also approved a measure on January 8 that would forbid the government from spending money preparing for the “no-deal” Brexit scenario without first receiving parliamentary approval.

According to Atlantic Council Global Business and Economics Program Director Bart Oosterveld, the votes show that “there is now a clear majority in the Parliament against a no-deal Brexit, composed of members of the opposition as well as Tory rebels. Neither of those groups can be reliably expected to vote for May’s current plan either.”

The problem, according to Oosterveld, is that “the votes this week continue to constrain Prime Minister May, without providing meaningful direction in terms of what might be an acceptable Brexit outcome to the Commons.” Should May’s deal fail, as appears likely, she would be forced to come up with a “Plan B’ for which she has been given no space to negotiate, no concessions from the remaining member states, and no consensus in Parliament.”

To add to May’s headaches, the Labour Party has confirmed that it will force a vote of no confidence in May’s government should the deal fail on January 15. This could trigger a new general election. May’s ability to survive the vote will likely come down to her ability to keep the DUP—who is outraged over her Irish backstop plans—in line. Although the DUP has previously sent signals that it could be relied on to support May’s government, the vote would be far from certain.

Labour leader Jeremy Corbyn “wants a general election, rather than a [second] referendum” on Brexit, according to Atlantic Council Nonresident Senior Fellow John M. Roberts. While Labour will want to capitalize on the chaos plaguing May, Corbyn “is still considered by almost every political commentator to be just as anti-EU as he has been for forty years,” while leading “a party whose membership overwhelmingly wants both to hold a second referendum and to use that referendum to remain a member of the EU,” Roberts said. A new general election would likely be fought over the issue of Brexit solely, which could put Corbyn on awkward footing, Roberts argued.

Alternatively, should May remain after the failure of her deal, she could look to Brussels to try to get an extension. The European Court of Justice has already ruled that the UK could revoke its invocation of Article 50—the provision in the Treaty on European Union which outlines the process for withdrawing from the Union—without needing permission from the other EU member states. But to suspend the Article 50 process— pausing the clock rather than cancelling the whole process—would need the EU’s approval.

“There are already reports that the government is quietly sounding out the EU about such a suspension,” Roberts said. “But at present it looks as if the EU will only be happy to grant such an extension if it is necessary to allow time for the UK to hold a general election or a second referendum before any actual exit date,” he added.

Jörn Fleck, an associate director in the Atlantic Council’s Future Europe Initiative, agreed, saying that “the EU has maintained there is no room for further concessions and a renegotiation, not least because it does not want to undermine the current deal.”

While they may be willing to a limited extension to Article 50, Fleck argued “don’t expect major concessions, especially on the Irish backstop as any such a move would essentially allow May to use no-deal as leverage over the EU-27.”

For now, May remains focused on trying to push her negotiated deal past the finish line, in part by convincing her fellow MPs that no real other alternative exists to her deal except chaos. With a plethora of scenarios and shifting coalitions, the road to Brexit seems as uncertain as ever, with only months remaining on the clock.

“Amid calls from politicians on all sides to seek some kind of national consensus” on Brexit, “none seems possible,” said Roberts. “The only certainty,” he added, “seems to be that whatever happens with regard to Britain either leaving the EU or finding some way to stay in, the divisions will grow even deeper.”