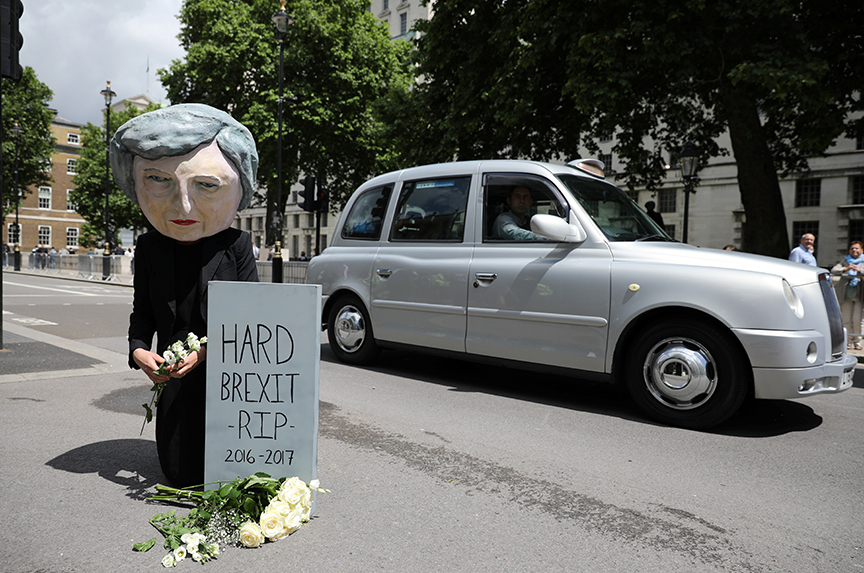 The Conservative government’s surprise loss of its parliamentary majority in the United Kingdom’s June 8 general election will greatly complicate the task of withdrawing the country from the European Union (EU), on which negotiations are due to start June 19. But it might conceivably lead to a better outcome in the end.

Prime Minister Theresa May specifically called the “snap” election on April 18 in order to increase the Conservatives’ seventeen-seat majority in the House of Commons. This, she argued, would give her a stronger mandate for the so-called “hard” Brexit she was demanding from the EU—involving complete departure from the EU Single Market and Customs Union and a clampdown on immigration.

Far from achieving such a mandate, she has received a stinging and humiliating rebuke. The Conservatives now have only 318 seats in the 650-seat House of Commons, down from 330. While she will try to carry on governing with the support of ten Democratic Unionist MPs from Northern Ireland, her days as prime minister are almost certainly numbered. The Conservative Party is notoriously intolerant of losing leaders.

Jeremy Corbyn, the upstart leader of the opposition Labour Party, who was largely responsible for May’s defeat, put it bluntly. “She wanted a mandate,” he said, “well the mandate she’s got is lost Conservative seats, lost votes, lost support and lost confidence.” Labour gained twenty-nine seats, but still fell fifty-seven short of the Conservatives.

Political analysts are now trying to discern how much of May’s defeat came from people who voted to remain in the EU in last June’s referendum that narrowly endorsed Brexit, how many wanted to leave but opposed her “hard” version of Brexit, and how many voted against her for other reasons—particularly the Conservatives’ unpopular economic policies and the lack of leadership skills May revealed in the campaign.

May, prime minister for less than a year, was previously largely unknown to voters and was fighting her first general election. In her woeful campaign, she emerged as a leader whom many variously described as “joyless,” “shallow,” “wooden,” “distant,” and a control freak.

Commentators in London on June 9 were comparing her to Hillary Clinton in last November’s US presidential election, a candidate who assumed she had the right to win without needing to fully explain why. In Corbyn, May faced a candidate with populist policies who managed to get much closer to the voters—although Corbyn’s leftwing policies resembled those of Bernie Sanders rather than those of Donald Trump.

May chose to interpret last year’s referendum vote for Brexit as implying support for a “hard” Brexit without explaining the details of her position or why she thought that was what most Britons wanted. Part of the reason was manifestly political—she hoped to scoop up extreme anti-EU voters who had previously supported the collapsing right-wing UK Independence Party (UKIP). In the end, many former UKIP voters broke to the Labour Party instead.

The Labour Party supported Brexit in a general, vaguer way, but made clear it would want to stay closer to the single market than May envisaged and did not endorse her often repeated mantra that “no deal (with the EU) is better than a bad deal.” On the contrary, Corbyn made clear that he would not leave the EU without a deal.

Sir Vince Cable, a prominent re-elected member of the pro-EU Liberal Democrat party, said that in the new Parliament it would be “possible to pursue a Brexit which retains the single market.” The extreme Brexit advocated by May “is simply no longer a viable option”—it would not be possible to pass the legislation May’s plans required in the new Parliament, he said.

The election results suggest that many Britons would prefer a “softer” Brexit. But it will prove difficult to readjust the British negotiating position in the wake of the election’s result, which can be interpreted in many different ways. The Conservatives remain the largest party in Parliament, and at least some of them will totally disagree with Cable’s analysis.

That will be one of the main problems for the Brexit talks in the new political configuration at Westminster. A Conservative government will find it more difficult to make concessions to the EU that would be rejected by members of its voluble anti-EU right wing, who could easily bring the government down if they wanted.

It was precisely to avoid giving her right wing this power that May sought a much bigger majority by calling the election in the first place. There is another side to this coin. May or her successor could threaten the EU that the government could fall if the EU negotiators insist on conditions that are too tough. But that would be a risky tactic.

The feeling in London on June 9 was that with May’s “hard” Brexit mandate denied, the UK is likely in the end to settle for a closer future relationship with the EU than she envisaged—which should be easier to negotiate, with less risk of a breakdown in the talks. It would also probably be to Britain’s greater political and economic advantage.

Representatives of the other twenty-seven EU member states have consistently said that the size of the UK government’s majority is of little concern to them. They have made it very clear that their negotiating position will not alter because of political developments in Britain. But they will, of course, be flexible in the timing of the opening of negotiations, if the new British government is not ready. And they will be receptive if the next British government makes what they regard as more reasonable demands for a closer new relationship.

Reginald Dale is a senior fellow and director of the Transatlantic Media Network in the Atlantic Council’s Future Europe Initiative. He is a former senior editor, commentator, and foreign correspondent for the Financial Times and the International Herald Tribune.

Image: A protester wore a mask depicting British Prime Minister Theresa May in London on June 9. “The feeling in London on June 9 was that with May’s ‘hard’ Brexit mandate denied, the UK is likely in the end to settle for a closer future relationship with the EU than she envisaged—which should be easier to negotiate, with less risk of a breakdown in the talks,” writes the Atlantic Council’s Reginald Dale. (Reuters/Marko Djurica)