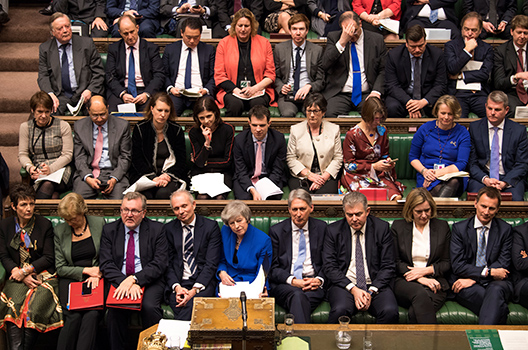 British Prime Minister Theresa May survived a no-confidence vote in her government on January 16, but now has until January 21 to come up with a new plan for Brexit.

The continuation of May’s government was threatened by a no-confidence vote triggered by Labour Party leader Jeremy Corbyn after May’s draft withdrawal agreement on leaving the EU was defeated in Parliament by 432 to 202 votes. The no-confidence vote failed by nineteen votes, 306 to 325.

May has promised to honor a January 9 amendment that compels the government to come back to Parliament within three business days with a new plan for Brexit. She said her government would introduce “an amendable motion” on January 21.

After surviving the no-confidence vote, May told Parliament that she believes it is her duty to deliver Brexit to the British people and that “this duty is shared by every member of this House. . . We have a responsibility to identify a way forward that can secure the backing of the House.”

Parliament must come to a swift agree on the proper way to achieve Brexit, May said, to “ensure this House retains the confidence of the British people.”

Corbyn responded to May’s offer for new meetings by demanding that “the government. . . remove clearly, once and for all, the prospect of the catastrophe of a no-deal Brexit from the EU and all of the chaos that would come from that.” His demands that the government abandon no-deal Brexit as a viable option and put alternatives—like an extension of the Article 50 withdrawal procedure or a second referendum—on the table were echoed by Liberal Democratic and Scottish National Party MPs.

Peter Westmacott, a distinguished ambassadorial fellow at the Atlantic Council and a former UK ambassador to the United States, believes that “there’s a very large majority in Parliament not to have a no-deal Brexit,” demonstrated by the January 8 vote to limit the UK government’s ability to prepare for a no-deal Brexit scenario. But there is still a large contingent of Conservative hardline Brexiteers who “think it’s a pretty good idea and are not frightened by” leaving the European Union without a deal, he added.

Such a scenario, Westmacott argued, would mean that “an awful lot of aspects of everyday life that we’ve got at the moment [does] not continue,” with significant disruptions to travel and trade.

Former US Ambassador to the European Union Stuart Eizenstat explained that many hardline Brexiteers are banking on a new free trade agreement with the United States to blunt the economic pain of a no-deal Brexit. While the Trump administration certainly would want to negotiate with London on a new deal, Eizenstat said, it will take a significant amount of time to deal with major issues such as “agriculture, fisheries, [and] GMOs.” On top of that, Eizenstat said, “it certainly doesn’t substitute for Britain’s major trading partner, which is the EU.”

With a majority of Parliament opposed to leaving without a deal, May must now come up with a new proposal that actually has a chance of passing the House of Commons. “It cannot be just what Mrs. May had defeated yesterday with a nice bow on it or painted a different color,” Westmacott said. “If she’d been defeated by twenty or thirty [votes] maybe—but defeated by 230 means there’s something fundamentally flawed in terms of its appeal to the British House of Commons.”

One short-term fix could be for May to ask the EU for a temporary extension of the Article 50 notification process—in effect delaying the official exit of the UK from the EU past the current March 29 date. The problem, Westmacott explained, is that Brussels has already said “we’re not interested in extending the deadline indefinitely for no reason.” The exception, he argued, would be if the UK asked for the extension in order to “negotiate some specific Plan B” or holding a second referendum. Such a delay, however, would be politically anathema to May’s hardline Brexit Conservative colleagues who “would think this was Britain giving up on Brexit,” according to Westmacott.

Atlantic Council Future Europe Initiative Distinguished Fellow Fran Burwell also pointed out that the EU’s parliamentary elections in May would make an extension of the UK’s membership extremely awkward. “It’s hard for me to see the European Parliament sitting MEPs in July and then having to revoke them when the British come back in, if that should happen,” Burwell said, arguing that the Europeans would need a compelling reason to make this extension work.

According to Westmacott, the only “obvious solution” to the Brexit deadlock is a customs union, which would put on the backburner the issue of the open Irish border and could gain significant support from opposition party parliamentarians. “I think there is a pretty large group in—within both the Conservative Party and within the Labour Party—which would like to see a more moderate form of Brexit,” Westmacott said, noting that a customs union would also be “very beneficial to business continuity, it would minimize some of the disruption that leaving without any deal at all told would give and it would give us a bit of a breathing space.”

May has previously been opposed to a customs union or continued UK participation in the single market mainly due to concerns that it would cede Brussels too much decision-making power to make Brexit seem significant. Still, Westmacott argued that “some sort of bespoke customs union arrangement” could “limit the immediate dislocation of crashing out with no deal.”

May is under the gun to get a deal soon as the pain of Brexit is already beginning to be felt in the UK. Alexis Crow, who heads PricewaterhouseCoopers’ Geopolitical Investing Practice, noted that auto manufacturers are already slashing jobs due to Brexit uncertainty and rising global trade tariffs, while large sums are already being spent by financial services companies to reorganize their operations and “move part of their operations out of the UK.”

Eizenstat warned that for many companies “they’ve already made that decision, they’ve moved offices, they’re moving people.” Westmacott conceded that there has already been some movement, but said the UK still has a window of opportunity to limit the damage. “Some of the bigger moves have not yet taken place and there are some big guys who are waiting to see how this actually plays out,” he said.

May’s government has survived another night, but now after two years of negotiating must figure out what parts of its deal it can save and what needs to go. A new deal needs to emerge, and May only has four days to figure it out.