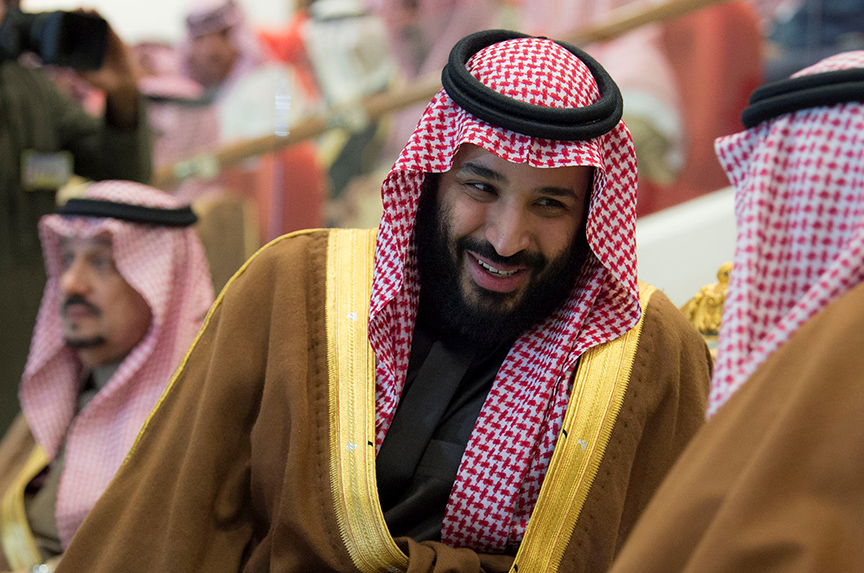 Saudi Arabia’s Crown Prince Mohammed bin Salman (MbS) will arrive in Washington on March 19 for a visit to the United States that includes stops in New York, Boston, San Francisco, Seattle, and Houston.

In Washington, the crown prince will meet US President Donald J. Trump at the White House on March 20. He will also meet members of Trump’s Cabinet, members of the US Congress, and private sector representatives.

US-Saudi relations, which had become strained under former US President Barack Obama, have warmed under Trump. The US president received a rousing reception in Riyadh last year when he made Saudi Arabia the first stop on his initial presidential trip overseas.

The crown prince’s agenda In the United States is expected to reflect his vast policy portfolio and reform ambitions. He will likely discuss topics ranging from geopolitics to security to energy and investment, and highlight the social and economic reforms that he has catalyzed in the kingdom. These reforms include diversifying the Saudi economy away from its reliance on hydrocarbon products, permitting women to obtain driver’s licenses, promoting public arts and entertainment for Saudi society, and expanding the private sector while shrinking a bloated public sector.

While these reforms have found considerable support in the United States, other Saudi policies face serious pushback, especially from Congress.

Congress is particularly concerned about the Saudi military intervention in Yemen. The US Senate is debating two bills that condemn the killing of civilians in Yemen and urge the Trump administration to halt US military assistance to Saudi Arabia pending certain conditions being fulfilled.

Saudi Arabia will also likely face an uphill battle securing congressional ratification of a 123 Agreement—an accord that would allow the transfer of US nuclear technology to the kingdom—in order to realize its nuclear energy aspirations.

Below are five key aspects of the US-Saudi relationship to keep in mind as MbS visits the United States.

1) A US-Saudi strategy for countering Iran

A prominent feature of warming US-Saudi relations has been the Trump administration’s apparent willingness to take a more aggressive rhetorical posture against the challenges Iran poses to US and Saudi interests, including in the Middle East.

Trump has repeatedly expressed frustration with the Joint Comprehensive Plan of Action (JCPOA)—the nuclear deal Iran reached with the United States, the United Kingdom, Russia, France, China, and Germany in 2015. The deal is intended to curb Tehran’s nuclear enrichment capability. Trump, together with some members of his Cabinet, has taken a strong, vocal stance against Iran’s destabilizing activities in Syria, Iraq, Yemen, and elsewhere.

Iran will very likely be on the agenda when MbS meets Trump. The Saudi delegation may push for a more proactive US-led effort to roll back Iran’s influence in its neighborhood. In turn, we may hear of additional steps that the United States intends to take vis-a-vis Iran, whether unilaterally or in partnership with likeminded allies.

Iran’s support for the Houthi rebels in Yemen and its ballistic missiles, which can reach Riyadh, will remain a thorn in the kingdom’s side.

2) The war in Yemen and congressional relations

Congress presents an obstacle to Saudi Arabia securing further US support for its military campaign in Yemen. Despite the kingdom’s rollout of a significant humanitarian assistance package in early 2018, ending blockades on Yemen’s Sana‘a airport and the Houthi-controlled port of Hodeidah, Congress remains deeply concerned about the devastating humanitarian toll of the conflict, including civilian deaths and injuries, massive internal displacement, potential famine, and a cholera outbreak.

The two bills currently under consideration in Congress would limit US support for the Saudi-led coalition in different ways. The first bill would require the United States to end its support for “hostilities” in Yemen, citing an unconventional interpretation of the War Powers Act. The second would condition US support on regular certifications from the secretary of state that the Saudis are actively seeking to end the conflict.

US Secretary of Defense James Mattis and some Republican senators are pushing to put off the vote on these bills. The Saudi delegation, in meetings on Capitol Hill next week, will likely make the case for why their engagement in Yemen is justified. Congressional relations, nonetheless, could serve as a source of tension during the visit.

3) Vision 2030 and potential US partnerships

Vision 2030 is MbS’s ambitious plan to introduce significant reforms to the kingdom’s socioeconomic fabric. These range from lessening the Saudi economy’s reliance on petrochemicals to fundamentally changing the character of entertainment and gender relations; it also includes introducing taxation, among other reforms, that could alter the traditional social contract between Saudi citizens and the state. The effort is sweeping in scope. It is being carefully rolled out by the government as it calibrates public appetite and willingness to accept reform.

The central component of Vision 2030 for MbS during his trips abroad has been investment, both in terms of finding foreign companies to invest in and attracting foreign investment to the kingdom. MbS’s visits outside Washington will likely be geared toward this end, particularly as Saudi Arabia determines where it will jointly list the initial public offering of 5 percent of Saudi Aramco.

However, while regulators in the United Kingdom appeared eager to woo the crown prince to attract the listing, their counterparts stateside do not seem as enthused. Additionally, the high-profile purge of Saudi royals and businessmen on corruption charges in November 2017 has created uncertainty about the Saudi investment environment that MbS will likely aim to dispel.

Along with the Saudi-led campaign in Yemen, a second area that promises to be contentious for relations with Congress is the kingdom’s stated desire to develop an indigenous nuclear energy capability.

The Saudis have expressed that a nuclear program is an important component of their energy diversification, particularly as they look to increase the amount of oil that they are able to export (as opposed to the amount they allocate for domestic consumption in the form of electricity generation and other utilities), and it would also showcase technical prestige. The Trump administration hopes to sell nuclear reactors to the Saudis as part of a multibillion-dollar deal to boost the US nuclear power industry.

But the United States is not legally able to export nuclear technology without a 123 Agreement. One key issue in current negotiations is whether Saudi Arabia would be allowed to enrich and reprocess nuclear fuel. Nonproliferation proponents extol a so-called Gold Standard agreement, which does not permit enrichment, coined during the US negotiations with the United Arab Emirates (UAE) during the George W. Bush and Obama administrations when the UAE voluntarily forwent enrichment. However, the Saudis view enrichment as their sovereign right, particularly in light of the JCPOA with Iran and the fact that only two of the twenty-three extent 123 Agreements meet this standard.

Not holding the Saudis to the same standard as the UAE could prove troublesome in a Congress that is divided on Saudi Arabia, particularly given Israel’s opposition to a deal. But US unwillingness to sell nuclear reactors to the kingdom could also drive the Saudis to buy from other sellers, including the Russians or Chinese, none of whom have such high standards. This has led some experts to suggest a middle path whereby the Saudis agree to suspend enrichment for some period of time, anywhere from fifteen to twenty-five or so years. Any proposal could trigger extended debate in congressional and policy circles.

5) Movement on the Gulf’s diplomatic crisis

The diplomatic crisis between Qatar and a bloc comprising Saudi Arabia, the United Arab Emirates, Bahrain, and Egypt has continued unabated since June 2017, and shows few signs of near-term resolution. The Gulf Cooperation Council (GCC) has been riven by the so-called Quartet’s blockade of Qatar, which stems from the blockading states’ convictions that Qatar is a leading sponsor of terrorism and an ongoing threat to the internal stability of their respective states.

But while Qatar has undertaken a flurry of diplomatic action to end the crisis, especially on a bilateral basis with the United States, soon-departed US Secretary of State Rex Tillerson made little apparent headway in his efforts to convince the Quartet of the imperative to resolve the dispute.

The ongoing boycott threatens US interests in presenting a unified political front in the Gulf against Iran, as well as developing interoperable ballistic missile defense capabilities across the GCC states, long a target for US defense policy.

The Trump administration hopes to hold a summit at Camp David later this year to bring the diplomatic row to a close, but this is unlikely without Saudi and Emirati buy-in. Innovative diplomatic strategies will be necessary to convince the Saudis and other blockading states to end the crisis.

Owen Daniels is an associate director with the Middle East Peace and Security Initiative in the Atlantic Council’s Scowcroft Center for Strategy and Security. Follow him on Twitter @OJDaniels.