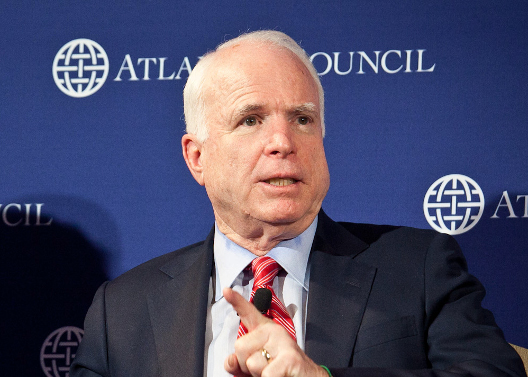 Senator John McCain declared tonight that the United States and its democratic partners have a duty to stand with those fighting against tyranny in North Africa, the Middle East, and Central Europe. That support must go beyond words to deeds, including an immediate no-fly zone over Libya to prevent further atrocities.

Speaking at the second annual Bronislaw Geremek lecture, along with Polish foreign minister Radosław Sikorski, he declared that, “What I have always valued about the Atlantic Council is that, at its heart, is the same core idea that animates our broader transatlantic community—the idea that Euro-Atlantic democracies, the stewards of Enlightenment principles, need not and should not tackle our challenges in isolation, be it Soviet aggression and the spread of communism in 1961 or violent extremism and energy security in 2011. It is the idea that our individual struggles are really a shared endeavor with greater meaning.”

Pausing for effect, he continued, “There is a word for this: solidarity. It is a word that will forever echo across history thanks to Polish people of courage and conviction like Bronislaw Geremek.”

From that premise, he reached bold conclusions: “It is our obligation as transatlantic democracies to look beyond these divisions—to look beyond differences of history, culture, class, and creed—to disregard all of the arguments that counsel passivity in the service of human dignity, and to reaffirm instead that core idea which still unites us and summons all of us to nobler endeavors: solidarity—solidarity with the universal longings of the human soul, for basic rights and equality, for liberty under the law, for tolerance and opportunity.”

There are many opportunities to demonstrate that commitment and McCain didn’t shy away from naming them.

In Belarus: “We should join hands, Europe and America together, to impose crippling pressure on the regime officials, family members, fellow travelers, and state-owned enterprises that are complicit in Lukashenko’s tyranny until the people of Belarus are free.”

In Moldova: “We must recognize that their struggle is no different than that of western Europe after the War, when the success of democracy hung in the balance—and we must now do everything in our power to tip that balance toward liberty, beginning with Congress repealing Jackson-Vanik for Moldova.”

And, of course, North Africa: “When we see brave Libyans, armed at times only with a desire for freedom and the courage to fight for it, confronting the ruthless mercenaries and aerial attacks of the Qadaffi regime, we must recognize in their national resistance the same yearnings that freed Bosnia and Kosovo from the iron fist of Milosevic–and we must provide whatever assistance necessary, as soon as possible, to prevent another Srebrenica and ensure the liberation of Libya after decades of madness.”

But what form must this solidarity take?

Asked in Q&A by Atlantic Council president and CEO Fred Kempe for specifics on Libya—would he go so far as a no-fly zone—McCain was unflinching:  “Of course we do a no fly zone.” Beyond that, we should offer “humanitarian assistance” and we must at least consider “supporting a provisional government.”

Upon questioning, he offered his opinion that, while President Obama had taken an “appropriate” approach to Lukashenko, the administration “has been behind” on dealing with the unfolding events in the Middle East.

Still, McCain took care to note that we “can’t lump all countries of the region together” and must tailor our policies according to a variety of factors. While he thought the projection of military power through the mechanism of a no-fly zone was warranted given the specific brutalities being perpetrated in Libya, he otherwise advocated the use of economic tools such as trade preferences, aid, and democracy assistance.

Like my colleague Magnus Nordenman, I’m skeptical of the utility of a no-fly zone over Libya. There are major legal and logistical hurdles to overcome, and there are some significant risks that inserting American power into the region will complicate the internal political situation and present serious moral challenges for American forces, who would potentially be witness to atrocities and yet prevented by the rules of engagement from intervening. And, as Foreign Policy‘s Joshua Keating points out, the NATO no-fly zone over Bosnia “did little to prevent the worst abuses of the conflict, including the 1995 Srebrenica massacre.”

Further, the conflicts in Iraq and Afghanistan have shown the severe limitations of the use of military power in establishing democracy in places where it has no history.

But McCain is certainly right that backing freedom movements and people who risk everything to rise up against despots is not only in the West’s moral interest but our security interests. And the choices are not between an Afghanistan-style invasion and stability operation—or even a no-fly zone—and standing passively by hoping for the best. Indeed, the Polish example is perhaps the best case of lending maximum support through moral suasion, international sanctions, monetary aid, and other meaningful measures when military intervention was not a serious option. And that was against the strong pressures of the Soviet Union, a global superpower, not a third rate dictator.