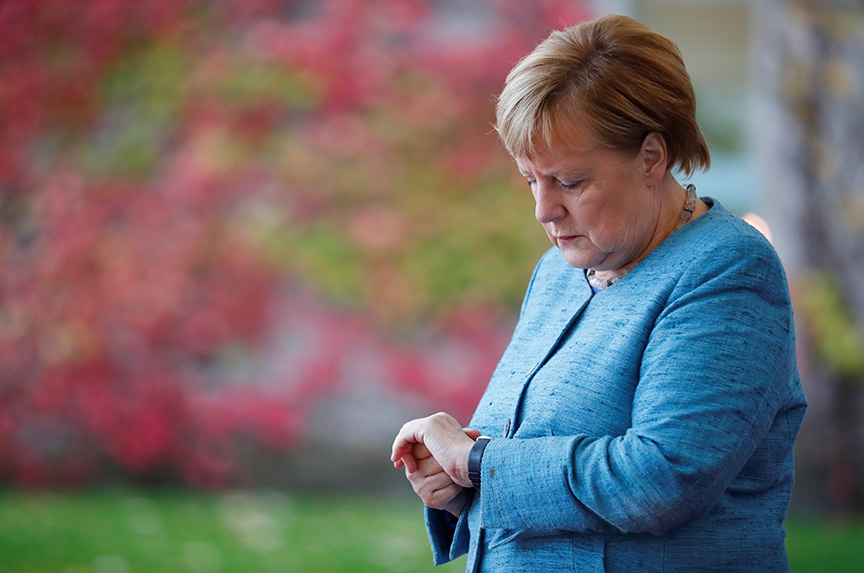 German Chancellor Angela Merkel awaited the arrival of participants ahead of the G20 Compact with Africa summit at the Chancellery in Berlin, Germany, on October 30. (Reuters/Hannibal Hanschke)

The chancellor announced her departure, as observers noted, with quiet dignity. Some thought she looked almost relieved. Angela Merkel surprised her party, her country, and the world by saying that she would let someone else lead the Christian Democratic Union (CDU) after the party’s congress in December; but she would continue to lead the government for the remainder of its term until 2021. This would then be the end of her political career; she would seek no further office.

Can Germany’s leader for thirteen years last in the chancellery for another three? At this stage it is more than doubtful. Merkel herself left the door discreetly open to an earlier exit. In her carefully calibrated speech on October 29, she mentioned the agreement between the three coalition partners in Berlin to review their joint work at half time next year. This was no accident. There are so many scenarios that could prompt an earlier exit that it would be a miracle if Merkel’s final political act lasted for a full parliament.

Let us consider just a few. Germany’s Social Democrats could decide that they must leave their suffocating alliance with the CDU so as to save themselves from further electoral annihilation, with new elections the almost inevitable result. The CDU could fare badly in the European and regional elections in 2019. Merkel’s successor as CDU party leader could go for a conflict with the chancellor by staging a rightward turn away from her legacy, or announce such a rupture even before his or her election. The Berlin coalition could remain stuck in acrimonious debate, with Merkel quitting in protest or disgust.

So the odds of three more years of Chancellor Merkel are poor, even if it never does to underestimate her political wiles. Her decision not to run again for the leadership of the CDU was certainly an implicit acknowledgement that she has lost the true basis of her power over the party—her capacity to win elections—but it was also a very clever gamble to secure her legacy. By withdrawing freely from the battlefield and refusing to lobby openly for a successor, she cut the grass from under the feet of those who were plotting or dreaming about rebellion.

Her announcement has been widely hailed as a grand gesture both within the party and beyond it, with warm tributes offered even by the leaders of the Social Democrats and the Greens. She has made it much harder for anyone aspiring to her succession to campaign aggressively against her; in fact, she may have made it impossible.

Barring some literally unimaginable catastrophe, her future position as grande dame of the CDU and German politics, a moral conscience of the nation, is now assured presumably for decades to come. Her successor as party leader will have to bear this in mind; and it might even turn out that the manner of her departure has blocked the road to power to any aspirant other than those who, with a few inflections, would essentially continue her centrist legacy.

There is no question that the party will face a difficult choice in December. If a successor such as Annegret Kramp-Karrenbauer or Armin Laschet anchors her- or himself too firmly in Merkel’s brand of politics, an impression will easily arise that the party has learned nothing from its recent electoral losses. On the other hand, a rightward shift under a successor such as Friedrich Merz or Jens Spahn might set up a potentially damaging conflict or break with Merkel—and make it impossible to win back those voters who have deserted the CDU for the Greens, this without any guarantee of recuperating those who have fled rightwards to vote for the right-wing Alternative for Germany (AfD).

Merkel’s critics have accused her of seeking just to manage political situations rather than leading from the front, a charge she has spectacularly disproved only once when she decided overnight to let over a million Syrian and other refugees seek a better life in Germany. Merkel never forgot that as a woman, an East German, a northern Protestant, and a latecomer to politics, she remained for many years an outsider in her party even when she was its leader. As a non-charismatic outsider, she could not possibly lead from up front: her authority rested in large measure on her superior ability to identify and espouse the shifting centers of gravity of Germany’s social consensus, and win elections accordingly.

But it would be wrong to say that her style of leadership, and the choices she made, did not contribute to shape Germany and Europe. Pursuing the work of her mentor, Helmut Kohl, she opened up the CDU even further to the center of German politics, creating space for a much broader mainstream consensus, though at the cost of strengthening the extremes. She helped steer the European Union (EU) through major crises—the eurozone, the refugees; her critics say she made them worse through wrong initial policy choices. There have indeed been a few serious policy mistakes and misjudgments, though it will take the work of historians to determine the extent to which Merkel was often constrained in her capacity to act by her fractious CDU and its Bavarian sister party.

But there is no question that in an age of convention-defying, unsettling leaders à la Silvio Berlusconi, Matteo Salvini, and Donald Trump, Merkel has been perceived by many citizens and leaders, including those disagreeing with her politically, as a deeply reassuring global presence projecting an aura of much-needed dignity. Ironically for a woman who is such a famously unstylish dresser, one of Merkel’s greatest contributions has perhaps been her unerring sense of style.

So what now? Not a lot will change for as long as she remains in office; there was never a real chance that her grand coalition would agree to any grand European reforms such as those advocated by France’s Emmanuel Macron; and on Brexit, Germany’s and the EU’s course look essentially set. Her authority on the European and global stage will certainly be somewhat weakened, though she will still speak with the full weight of Germany should a big crisis occur.

What is equally clear is that whoever succeeds her as chancellor will continue to operate within Germany’s post-war consensus-driven political traditions. There will perhaps be changes of emphasis and certainly differences of personality, but no fundamental break. In an age of unsettled politics, Germany will remain a steady and predictable partner, continuing the legacy of Angela Merkel and the seven post-war chancellors that preceded her.

Thomas Klau is senior Europe analyst for eurointelligence. He is the founder of the research NGO Asylos and has worked for the European Council on Foreign Relations in Paris and for Financial Times Deutschland in Brussels and Washington.  Follow him on Twitter @thomasklau.