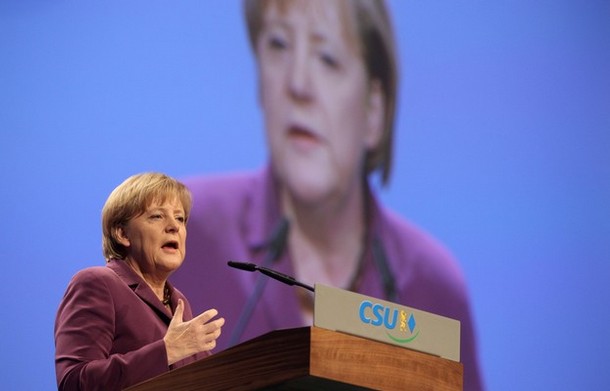 Once again, Angela Merkel has held her ground and forced the other EU leaders to accommodate Germany’s policy concerns. This time, it’s a set of amendments to the Lisbon Treaty to deal with sovereign debt emergencies.

Bowing to most of the demands tabled by German Chancellor Angela Merkel, EU leaders green-lighted quicker and harsher fines for repeat budget overspenders, as well as a permanent emergency fund to safeguard the euro. EU officials also agreed to hold the private sector more accountable in case of state defaults.

"Today we took important decisions to strengthen the eurozone," EU Council President Herman Van Rompuy said after eight hours of tedious negotiations culminated in the agreement. "We recommend a robust and credible permanent crisis-resolution mechanism to safeguard the financial stability of the eurozone as a whole."

Under the new deal, Brussels will be able to warn member states of speculative bubbles and fine them earlier and harsher if they go beyond the European Union’s deficit limit of 3 percent of gross domestic product. The sanctions scheme applies to 25 EU members. Only Britain and Denmark, who aren’t members of the eurozone and have no plans to join, are exempt.

Leaders agreed to a permanent mechanism that would replace a $600 billion emergency safety net when it expires in 2013. Private investors as well as the International Monetary Fund will have to contribute to it, leaders said. The short-term mechanism was created to bail out indebted eurozone countries and stabilize the euro. The common currency’s crisis almost brought the bloc to its knees, leaders said in Brussels.

The Economist‘s Charlemagne calls it "Game, set and match to Angela."

“I AM on the whole quite satisfied with the decision.” With these modest words, Angela Merkel, Germany’s chancellor, rounded off a remarkable victory at the end of a bruising European summit that concluded today.

Less than a fortnight ago, members of the European Union were universally opposed to Germany’s demand to reopen the EU’s treaties to strengthen the means of maintaining fiscal discipline among members of the euro zone. But within days of winning over Nicolas Sarkozy to her cause at the Deauville summit on October 18th, she got everyone to sign up to the idea of a “limited treaty change”. By the slow-moving standards of the EU, this happened in an eye-blink. It is a testament to the authority of Mrs Merkel, as well as the power of Germany’s constitutional court in Karlsruhe.

“Everybody was very sensitive to Mrs Merkel’s persuasive arguments,” is how one national diplomat put it. “Bullying,” said another. Whether by persuasion or compulsion, Mrs Merkel secured her main objective: agreement to amend the EU treaty to allow the creation of a “permanent crisis mechanism” to resolve the debt of countries that may be hit by a Greek-style crisis in future.

Merkel played the agreed changes as a sensible necessity that would create stability and is good for Europe, telling reporters today: "We are doing everything to ensure that there will never be a repeat of the crisis we have had… I think it is important to create a clear culture of stability in Europe. That is the ultimate for good cohesion in the EU. Europe makes us strong, but this Europe needs rules."

The “lighter” version of the treaty change agreed to today may not require the kind of hair-pulling difficult referendum that Ireland went through last year to ratify the treaty, according to Irish prime minister Brian Cowen today.

The terms of the treaty amendment are said to be so narrow that other changes or initiatives cannot be added to it, averting in theory the concerns of leaders like Hungary’s prime minister Viktor Orban who said this week, “It is easy to open a treaty, but it is hard to close it.”

Analysts at the two-day Brussels summit said one of the more convincing arguments Germany and France made in intense lobbying is that the current Greek bailout fund that emerged in May amid a plummeting euro is set to expire in 2013.

Once Merkel convinced Sarkozy to come on board with her most significant initiatives, this was a foregone conclusion.   The two are, by far, the dominant actors in the Eurozone.  And Merkel had the hammer here, because she likely would not have been able to sustain Germany’s contribution to the relief fund in absence of major changes and, without Germany, there is no relief fund.

Aside from power politics, Merkel happens to be right here.  While there are legitimate concerns being expressed by the European Central Bank and others about running off investors and destabilizing the Euro with talks of private liability for loans to governments who default, there simply has to be a mechanism to force national governments to act responsibly.   The common currency forced Germany to act as "Europe’s ATM" and bail out the bad behavior of Greece and others — with very little consequence to bad actors.   That simply wasn’t a sustainable position without restoring moral hazard.