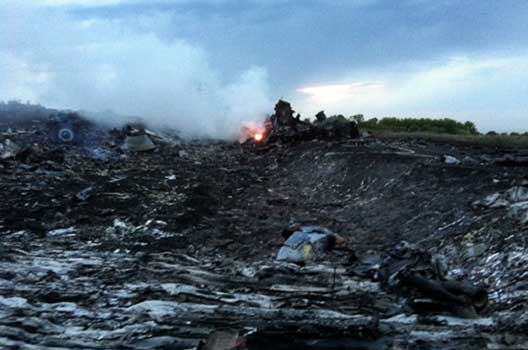 The downing of Malaysia Airlines Flight 17 over eastern Ukraine on July 17 has heightened international concern about the Ukraine-Russia conflict, tragically demonstrating the broader impact and consequences of the ongoing war.

How will this disaster impact US-Russian relations going forward? Furthermore, should the West sharpen its military and economic tools to curtail Russian aggression against Ukraine?

To answer these questions, Atlantic Council experts joined members and journalists on a call to discuss the implications of the alleged missile strike that left 298 people dead.

Lt. Gen. Patrick O’Reilly, USA (Ret.), nonresident senior fellow with the Brent Scowcroft Center on International Security and former director of the Missile Defense Agency, explained that anyone successfully firing a Buk missile needed significant training and skills – and had to be in the right place to hit an intended target.

Adrian Karatnycky, a nonresident senior fellow in the Transatlantic Relations Program and former director of Freedom House, reported that his sources have been saying for a while that Russians have been moving missiles and launchers into the region.

Putin’s reasoning for doing this is one of two options: either he wants a permanent zone of instability in eastern Ukraine, or he “wants to force deep concessions in negotiations” with Western power. John Herbst, director of the Dinu Patriciu Eurasia Center and former ambassador to Ukraine, claimed that the “feckless Western policies” have emboldened Russian actions that led to the downing of MH17. He specifically referred to how Western leaders failed to follow through on their early June ultimatum to Putin to cease interference in Ukraine. He said that President Obama laid down solid sanctions on Wednesday – but that should have happened two weeks ago; he also said Europe’s actions were “better than nothing.”

He continued that “To simply let this happen does not auger well for the peace of Europe. A clear line needs to be drawn now… Time for Western Europeans to wake up.”

For a while now, he said, Russian have been giving “scores” of weapons to pro-separatist rebels, including T-64 tanks.

When asked whether the US military should provide lethal aid to the Ukraine military, Herbst said he thought the US should be providing lethal assistance such as anti-aircraft and anti-tank weaponry. At the same time, Herbst called on the US administration to craft sanctions that are as painful as possible for Russia, but not for Europe.

Putin, continued Herbst, has been “tactically shrewd” throughout the entire campaign. Only by having a strong Western response can make Russia, “a revisionist power,” think twice before trying to achieve more objectives. In sum, Herbst believes “a new Russia” requires “a new Russia policy.”

Karatnycky noted that he found that some in Russia’s business community and the more pragmatic members of Putin’s circle want a resolution. He called on Putin to use this tragedy to walk back the aggressive actions in Ukraine – and he called on the West to make it clear to Putin that his current moves were unacceptable and would result in significant harm to Russia’s business interests. The discussion, moderated by Barry Pavel, Council vice president and director of the Scowcroft Center, also covered subjects such as how the lack of a Western response might embolden China, whether or not tougher sanctions should be put in place, and what the immediate US response should be.

To listen to the entire conversation, please click play on the audio player above.