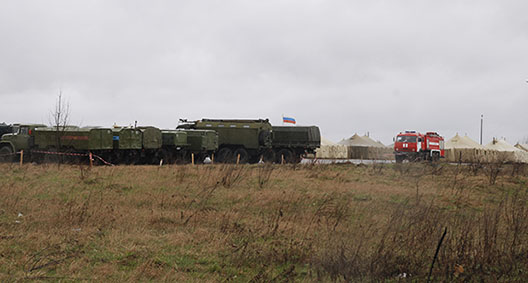 Less than a month after Russia’s annexation of Crimea, a further Russian incursion into eastern Ukraine remains a distinct possibility. President Vladimir Putin may be emboldened by the weakness of the central government in Kyiv and a failure so far of Western sanctions to enforce painful to consequences on Russia. Putin has had an invasion force assembled on Ukraine’s eastern border for nearly a month, and he may feel that he has sufficiently set the stage for an invasion with the seizure by armed, pro-Russian demonstrators of government buildings in three Ukrainian provinces. After all, that was the method used only weeks ago in Russia’s successful occupation of Crimea.

What type of an incursion might Russia make? A broad or a more limited invasion? Igor Sutyagin and Michael Clarke, scholars at the Royal United Services Institute, paint four possible scenarios:

Sutyagin and Clarke say Russia’s choice will rely on how it assesses the value of key resources in the Ukrainian provinces it could target. These include oil and gas fields, rich, food-producing farmlands, and strategically important arms factories.

With the annexation of Crimea, Russia’s state-controlled energy giant, Gazprom, has declared control of Ukraine’s offshore gas and oil fields in the Sea of Azov. If Russia seizes the eastern land corridor to Crimea, it would cut Ukraine off from that coastline, consolidating that claim.

That eastern corridor would help Russia supply Crimea by land, meeting its heavy dependency on basics such as food, 85 percent of which must come from the Ukrainian mainland.

This Russian reliance on Ukraine’s defense industry may might increase Russia’s incentive to find a peaceful resolution in the Ukraine-Russia relationship, or, in light of recent events, propel Putin to grab these enterprises as part of a larger land grab.

May will be the critical month for Russia’s decision-making, say Sutyagin and Clarke. Ukrainian presidential elections are to take place on May 25. If they go well, that will diminish Putin’s claims to be acting in the humanitarian interests of Russian speakers living in Ukraine. Furthermore, come May Russian troops, which have been at readiness for nearly a month will be losing their combat effectiveness. Troops must either be deployed or stand down.

Image: Military tents and trucks are seen in a field near the village of Valuyki, in the Belgorod region, near the border with Ukraine, April 10, 2014. REUTERS/Anton Zverev