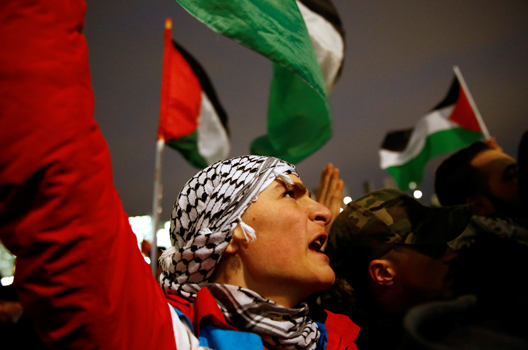 The shift toward nationalist populism, demonstrated by the sweeping political changes around the world in 2017, has throughout history been a harbinger of global instability and conflict, and could directly affect both the international security landscape and global economy in 2018.

Looking back, it is hard to believe how quickly the geopolitical landscape has changed in just one year.  Through 2017, elections all over the world brought new forces to power, challenged the political establishment, introduced new tensions into global politics, and exacerbated old ones.

However, the circumstances that paved the way for these historic political developments existed before the elections themselves. The once-in-a-generation upset victory of US President Donald J. Trump in the 2016 US presidential election was, partially, a byproduct of a government system that had become calcified and a political class that had become tone deaf to the challenges facing working-class families. Trump’s promise of positive change swept him into the Oval Office, but the changing nature of the United States and the state of the global economy make it highly unlikely that he can deliver to these disaffected voters.

The United States is not alone in feeling the earthquake reshaping the political landscape in Western democracies. Few could have predicted the dramatic loss of support of the mainstream parties in France’s 2017 elections, with a new upstart party led by French President Emmanuel Macron, En Marche!, winning over the right-wing National Front. In Germany, Chancellor Angela Merkel’s reign may be nearing an end as she struggles to form a government, and a far-right party takes its place in the Bundestag for the first time in more than half a century. Add to this state of affairs Great Britain’s decision to separate from the European Union (EU), rising anti-democratic tendencies in countries like Hungary and Poland, and a reversal of secular democracy in Turkey, and what becomes evident is a global trend toward populism that is broad and disturbing.

These political circumstances, the result of a resurgence of nationalist populism, often pave the way for exacerbated security threats.

While an argument can be made that things are not as bad as they seem, it would be wise to heed the fundamental warning signs in the global political and security landscape and to question the exuberance of the global market which has shown remarkable resilience to the challenges of 2017.

As 2018 nears, let’s take a look at a few of the emerging global “hot spots,” as well as the interconnected political and security risks on the horizon:

North Korea: It is hard to believe that North Korean missiles can fly over Japan, setting off alarms in cities, and the global markets barely budge. Despite the political rhetoric between Washington and Pyongyang, the generally positive economic news in the United States and Europe have lulled people into a false sense of security.

Over and over, history has shown how miscalculations, nationalistic machismo, and an over-inflated sense of the ability of military capabilities to produce or enforce political objectives have led to devastating conflicts. So far, Trump’s blustering rhetoric has not deterred his “rocket man,” North Korean leader Kim Jong-un. Rather, it has had the opposite effect, escalating the threat to the region with increasingly provocative North Korean missile and nuclear tests. While the most likely scenario is that the situation will eventually reach a new stasis point with a rigid “containment and sanction” policy designed to keep a nuclear-armed North Korea in check, Trump’s unpredictability and inexperience, matched by a megalomaniac counterpart in Pyongyang, could create the perfect storm.

China: The challenges posed by North Korea, an ally of Beijing, have further complicated the US-China relationship. While this dynamic has many dimensions, the key one to watch is whether lack of progress on North Korea will add fuel to the protectionist fire in the United States. To the extent that China is seen as a valuable partner that will help Trump deal with North Korea, the United States is likely to proceed cautiously on trade. However, if the perception is that Beijing is not pulling its weight in resolving the crisis, there could be additional pressure from the US Congress for a stronger approach to trade with China that could set the United States on a treacherous economic course and the path toward a trade war. With China’s additional emphasis on modernizing its military to project power globally, its aggressive stance on the South China Sea, and Japan’s increasing attention to strengthening its own defense, Asia has the potential to be a hot spot for the next year with political and security issues spilling over into the global economy.

Russia: The coming year is unlikely to bring any good news with respect to Russia, and downside risks abound. A thorough investigation has thus far revealed that Moscow actively worked to elect Trump with the hope that the pragmatic businessman would be able to ignore land grabs in Ukraine and foster a more pro-Russia relationship between Washington and Moscow. However, Russian President Vladimir Putin’s strategy has backfired, solidifying anti-Russian attitudes among US conservatives and liberals alike, and resulted in the overwhelming passage of stronger sanctions by the US Congress.

In 2018, it is likely that further damaging revelations from ongoing investigations by the Special Counsel assigned to investigate Russia’s role in the election will weaken the administration. This will further undermine Washington’s ability to deal effectively with domestic and global issues and effectively engage with the United States’ international partners.  Russian hybrid warfare and fake news emanating from Moscow will likely continue to throw political processes off tilt in targeted countries and US sanctions are likely to be a permanent part of the new landscape. The net result of all of this will been an erosion of stability and peace in the world and a weakening of longer-term economic growth.

Iran: Trump’s decertification of Iran’s compliance with the 2015 nuclear deal is likely to embolden hardliners in Tehran and result in more aggressive efforts to undermine US interests in the region and globally, through covert and overt military and political support to US adversaries.  Tehran will find welcoming partners in Russia and China and look to drive a wedge between Europe and the United States, and the net result will be greater instability and potential for conflict.  While a number of Arab states will be pleased with the more aggressive US approach toward their arch rival, Trump’s additional political capital is likely to be wasted unless the administration can show a more disciplined and coherent approach to its foreign policy.

Terrorism and the Middle East: While the Islamic State of Iraq and al-Sham (ISIS) has lost most of the territory of its self-declared caliphate in Iraq and Syria, violent extremism has only spread as foreign fighters filter back into Europe and other parts of the West. Further, ISIS cadres working remotely in cyberspace encourage simple, but lethal, acts of terrorism. ISIS’ ideology remains virulent and its impact felt well beyond the acts of terror, stirring populist and right-wing counter movements and sowing hate, suspicion, and division that disrupt democratic political systems in developed and developing countries alike.

Iraq’s success in officially beating back ISIS and routing the group from within its borders has unfortunately not provided the country with the breathing space to focus on reconstruction and its own economic challenges. Kurdistan’s hasty and ill-timed independence referendum in October has created further complications, upsetting not only Baghdad, but Ankara and Tehran as well. While Erbil has backed off in the face of international opposition, the issue will not disappear, but instead will complicate political dynamics in the wider region in 2018.

The Kurdish issue also plays into the challenges in Syria, further complicating US-Turkey relations and giving Russia yet another card to play in upsetting the balance of power and furthering the advances of the regime of US President Bashar al-Assad.  While both the United States and Turkey have supported anti-Assad factions fighting in Syria, US support for the Kurdish rebels, deemed terrorists by Ankara, has been met with strong denunciations in Turkey. The complicated nature of the war and the geostrategic competition mean there is little hope for a lasting peace in Syria in the coming year, and the possibility of an inadvertent incident between US and Russian or Turkish forces escalating into a security crisis remains ever present.

Beyond Syria, Turkish President Recep Tayyip Erdoğan’s hostile rhetoric toward the United States and the EU, combined with its reversal of internal progress, have created a new political dynamic that will seriously undermine NATO’s ability to effectively address security challenges. Turkey is a NATO ally. In combination with the advance of the far right in European politics and unpredictable leadership in the United States, the situation between Ankara and its Western allies is likely to get worse before it gets better, and could presage the advent of new hots spots in the coming year.

Finally, while the US administration has argued that recognizing Jerusalem as Israel’s capital is merely a recognition of reality, there can be little doubt this will seriously unsettle the Levant and the wider Middle East region.  It will provide renewed energy to anti-US sentiments and recruitment efforts for extremist groups. This decision will also provide Russia with further opportunities to exploit the instability and undermine US and European interests in the region and globally.

The United States: All these political and security challenges will be further complicated in 2018 the political environment in the United States as different political parties position for mid-term elections in November.  This is likely to mean an even less patient and cooperative approach by the administration to the delicate and time-consuming process of building coalitions to address global challenges.  As Trump tries to project strength to the portion of the voter base that sees the world in an “us versus them” mentality, the approach toward foreign adversaries is likely to become more bellicose. All this significantly increases the chances of a foreign policy misstep that could trigger a reversal in markets and the economic outlook.

With global and regional powers, including the United States, China, Russia, and Turkey, playing out their disparate versions of “restoring greatness” and pursuing nationalistic agendas over global and shared interests, the international political and security situation is at one of its most dangerous points since the end of the Cold War. In addition, major dislocations caused by the shift to a knowledge economy, an exponential growth of natural catastrophes from a warming planet, and mass migrations from people fleeing insecurity and economic despair, mean developed and developing countries alike will continue to be tested to the limits. In this environment, one should expect a coming reckoning of the optimism in global economic markets with the reality of a deeply insecure and hostile world. Whether this happens in 2018 is yet to be seen, but the odds are mounting.

In this highly uncertain and politically charged world, businesses, governments, and non-governmental organizations alike that want to survive and thrive would do well to pursue strategies that ensure they are:

–  Adaptive and nimble in responding to global developments as they occur;

–  Diversified in their programs, revenues, and supply lines;

–  Cautious with investments and strategies tailored to accommodate the deteriorating global political landscape;

–  Hedged, expecting bad things to happen and building redundancies into their plans and systems; and

–  Technologically advanced and innovative to help solve problems when they occur and find new ways of reaching clients, program participants, or citizens when hurdles are thrown in the way.

Storm clouds continue to gather across the globe as 2018 nears, but wise leaders, attuned to the changing dynamics, will find opportunities to advance their missions in the face of an increasingly difficult environment.

Daniel V. Speckhard, a former US ambassador, is nonresident senior fellow with the Atlantic Council and president of Lutheran World Relief.