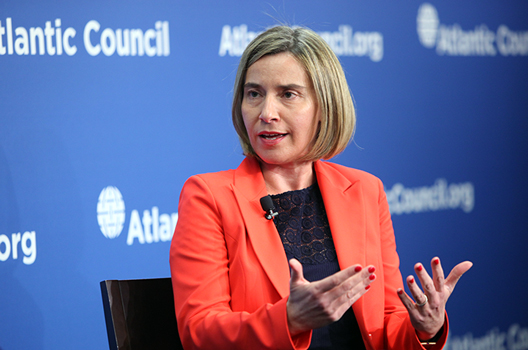 The European Union’s foreign policy chief, Federica Mogherini, said on February 10 that Brussels is committed to the full implementation of the nuclear deal with Iran, and that she came away reassured from her meetings with US officials that Washington shares that commitment.

Speaking at the Atlantic Council, Mogherini said she found “common ground” with the Trump administration on the deal that seeks to cut off Iran’s pathways to building a nuclear bomb. Mogherini said: “I heard from my interlocutors the intention to make sure that the deal is 100 percent implemented.”

“It is a clear European shared interest to preserve the agreement,” she added.

The EU, she said, will monitor in a “very strict manner” the implementation of the deal “in its entirety, from all sides.” The nuclear deal was struck between Iran and the so-called P5+1 countries—the United States, the United Kingdom, Russia, China, France, and Germany in 2015. The United Nations’ nuclear watchdog, the International Atomic Energy Agency (IAEA), has found Iran to be complying with the terms of the agreement. Mogherini’s statement was a clear message to the United States to also stick to its commitments.

US President Donald Trump, who has described the nuclear deal as a bad one, has put Iran “on notice” following missile tests by the Islamic Republic. He has also promised a tougher stand on Iran’s support for terrorism in the Middle East. On February 3, the Trump administration imposed sanctions after Iran conducted a ballistic missile test.

Mogherini said that the EU shares US concerns about Iran’s missile tests, its role in regional conflicts, and support for terrorism.

While in Washington, Mogherini met US Secretary of State Rex Tillerson; National Security Advisor Michael Flynn; Trump’s advisor and son-in-law, Jared Kushner; and members of the US Congress.

Mogherini conveyed to her interlocutors that “Europe feels an interest and a responsibility to engage with Iran” in an economic and political dialogue. “I know this is not the US policy, but it is the European policy and it will continue,” she said.

Mogherini, who is the high representative of the European Union for foreign affairs and security policy, spoke in a conversation that was moderated by Atlantic Council President and CEO Fred Kempe. She was introduced by Kristen Silverberg, managing director of the Institute of International Finance and a former US ambassador to the European Union.

Mogherini described her meetings in Washington as excellent and said she came away from them with a sense that the Trump administration is committed to a relationship with the EU.

Trump has ruffled feathers in Europe with his praise for the United Kingdom’s decision to vote in a referendum to leave the European Union, and prediction that other EU member states will follow suit.

In thinly veiled criticism of the president’s comments, Mogherini urged noninterference in the EU’s internal affairs. “We do not interfere on US domestic politics, and there is plenty of US domestic politics these days,” she said. “The same goes with Europe.”

Mogherini noted that the EU is a strong union of twenty-eight member states. While the UK had voted in the summer of 2016 to exit the EU it does not seem in a particular hurry to leave, she said. British Prime Minister Theresa May has said she will start the process of taking the UK out of the EU at the end of March. That process could take at least two years.

The EU foreign policy chief found areas of convergence as well as divergence with the Trump administration. She said there is common ground on the interest on both sides of the Atlantic to work together, on Ukraine, Syria, and terrorism.

Mogherini listed the Middle East peace process, climate change, multilateralism, human rights, free and fair trade, and global migration as areas of where she and her interlocutors had differing opinions.

Trump’s rhetoric on Russia, underscored by his recent defense of President Vladimir Putin’s human rights record, has caused unease in Europe, especially among Eastern European nations that are on the receiving end of an increasingly aggressive Russia.

Trump is eager to improve ties with Russia. Mogherini said that Europe has a two-track policy with Russia. The EU and Russia have worked well together on issues like the Iran nuclear deal and the Middle East peace process. “This perception that Europe doesn’t talk to Russia is a misperception,” she said.

On the other hand, the EU, along with the United States, has imposed sanctions on Russia in response to the annexation of Crimea in March of 2014. Ukraine is very important to Europe not just because of the principles of international law, but also for the security of Europe—the position that borders cannot be changed by force, Mogherini said.

In her meetings in Washington, Mogherini said Trump administration officials agreed that sanctions on Russia should remain in place as long as the Minsk agreement that seeks to end the conflict in Ukraine is not fully implemented. She was uncertain whether this is the administration’s official position, but noted that it is the EU’s position and one that is shared by the US Congress.

The Washington Post reported on February 9 that prior to Trump taking office Flynn had—despite denials from the Trump administration—discussed the sanctions with Russia’s ambassador to the United States.

Mogherini said that the Europeans will remain united on the need to keep the pressure of sanctions on Russia.

Mogherini said the US-EU relationship could turn into a transactional one if it meant having to explain the value added by the EU. If there is a need to recall that value, “then we are ready to do so,” she said noting the EU’s economic and security contributions to the transatlantic relationship.

The EU accounts for 80 percent of foreign investment in the United States, while European investments have added a couple of million US jobs, she said. “We need each other. It is not Europe that needs America only, it is America that needs Europe, and we better recognize that,” she said.

Referring to the “big elephant in the room,” Mogherini noted the need for investment in security. Only five of NATO’s twenty-eight member states meet the goal of spending 2 percent of their GDPs on defense.

“If people are serious on the need to have European member states investing not only more, but also better, in defense, this can be done with the support of the European Union,” she said.

Europe has been flooded by a historic wave of migration fueled by conflicts in the Middle East and Africa. Mogherini declined to comment on Trump’s executive order banning refugees from all over the world from entering the United States—a ban that has been struck down by the courts. Trump also wants to build a wall on the southern border with Mexico to keep out migrants.

“The history of Europe is also such that we tend to be quite sensitive when it comes to walls,” said Mogherini. “We tend to celebrate when walls come down and we are quite skeptical when it comes to the idea that walls can stop people.”

Mogherini said she raised this issue in her meetings in Washington: “I raised this not to say you’re wrong, but to say we do it in a different manner.”

Image: “The history of Europe is also such that we tend to be quite sensitive when it comes to walls,” Federica Mogherini, the high representative of the European Union for foreign affairs and security policy, said at the Atlantic Council in Washington on February 10. (Atlantic Council/Victoria Langton)