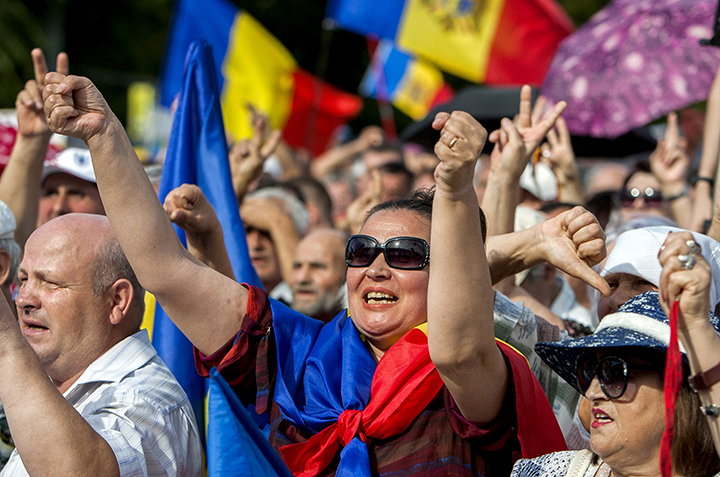 Protesters shout slogans during an anti-government rally organized by the Dignity and Truth movement in central Chisinau, Moldova, on September 6, 2015. Tens of thousands of Moldovans demanded the resignation of the President and early elections over a $1 billion bank fraud. Moldova’s Parliament voted on April 1, 2016, to hold direct presidential elections on October 30. (Reuters/Viktor Dimitrov)

Moldova’s presidential elections are shaping up to divide the electorate between pro-Europe and pro-Russia candidates even before campaigning officially gets underway.

On April 1, Moldova’s Parliament voted to hold direct presidential elections on October 30. It put off the official start of the election campaign until July 30 to allow Parliament time to pass electoral legislation and fill vacant seats in the Central Election Commission. The vote in Parliament followed a surprise Constitutional Court decision on March 4 that struck down a 2000 amendment, which required a supermajority of sixty-one out of 101 members of Parliament to select a President. The political consensus required to obtain such a supermajority turned out to be more difficult than anyone had expected.  In fact, a failure to achieve a supermajority led to a 900-day period between September 2009 and March 2012 when Moldova lacked an elected President.

The October 30 election will take place against a backdrop of political turmoil in a country with a population of just under three million.  In April of 2015, the Dignity and Truth movement began organizing large-scale protests that tapped into public anger over the disappearance of around $1 billion from three Moldovan banks. For a country known as the “poorest in Europe,” this amounted to approximately one-eighth of the GDP. The protesters demanded new parliamentary elections and collected signatures for a referendum on a new constitution. As a result of the protests and political intrigue of the past fourteen months, Moldova has seen six different persons serve in an official or acting role as Prime Minister. In addition, a former Prime Minister, Vlad Filat, was arrested for his involvement in the banking scandal.

If no candidate receives a majority in the first round of the presidential election, the top two vote-getters will face off in a runoff two weeks later. Socialist Party Chairman and Member of Parliament, Igor Dodon, is the most likely candidate to win over pro-Russia voters and make the runoff. Ironically it was Dodon who provided a key vote in 2012 to break the 900-day impasse without an elected President.  Thirty-seven-year-old Renato Usatyi, the Our Party Chairman and Mayor of Moldova’s second-largest city Balti, is more popular with pro-Russia voters than Dodon, but the constitution requires the President to be at least forty years old.

On the pro-Europe side of the electorate, there is no decisive favorite in the first round and voters are likely to split their votes among a handful of candidates. According to a survey by the International Republican Institute (IRI) in November of 2015, former Education Minister Maia Sandu and former Prime Minister Iurie Leancă are the two highest-rated candidates. Sandu won praise in June of 2015 for refusing to accept her party’s nomination as Prime Minister unless the General Prosecutor and Governor of the National Bank of Moldova were changed. Parliament subsequently selected another candidate who was voted out three months later. Leancă is widely viewed as an important part of Moldova’s signing and implementation of the European Union Association Agreement.  However, Leancă was maneuvered out of the Prime Minister’s post by his predecessor, Filat, in February of 2015.

Andrei Năstase, a key leader of the Dignity and Truth movement, is expected to join the race and capitalize on the success of the protests and his opposition to the country’s richest and most unpopular politician, Vlad Plahotniuc.

Plahotniuc, the main sponsor of the Democratic Party, is likely to encourage former Speaker and Acting President, Marian Lupu, to join the race. If Lupu agrees it would further split the votes from the pro-Europe electorate. Another pro-Europe candidate, three-term Chisinau Mayor Dorin Chirtoacă, is ineligible to run because he is thirty-seven years old.

In previous Chisinau mayoral elections, the pro-Europe electorate has been divided in the first round, but has united in the runoff to defeat the pro-Russia candidate. This was the case last June when Chirtoacă narrowly defeated Socialist Igor Dodon. While some believe this may be the case in the second round of the presidential election, it is simply not clear at this time.

There are three key scenarios to watch for in this election: First, how much damage will the pro-Europe candidates do to each other in the first round?  In effect, the first round is the equivalent of a US political party’s primary.  If the eventual nominee emerges badly wounded, it bodes poorly for his/her chance to win the runoff. Second, will the pro-Europe candidates unite behind the leader in the runoff? Third, will the Democratic Party support the top choice of the pro-Europe electorate in the runoff, or could Plahotniuc’s interests be better served by throwing the party’s support to Dodon?  Suffice to say, Moldova’s first direct presidential election in twenty years may yield some surprising outcomes.

Brian Mefford is a Nonresident Senior Fellow at the Atlantic Council’s Dinu Patriciu Eurasia Center. He writes a regular blog on Ukrainian and Moldovan politics at www.brianmefford.net/blog.