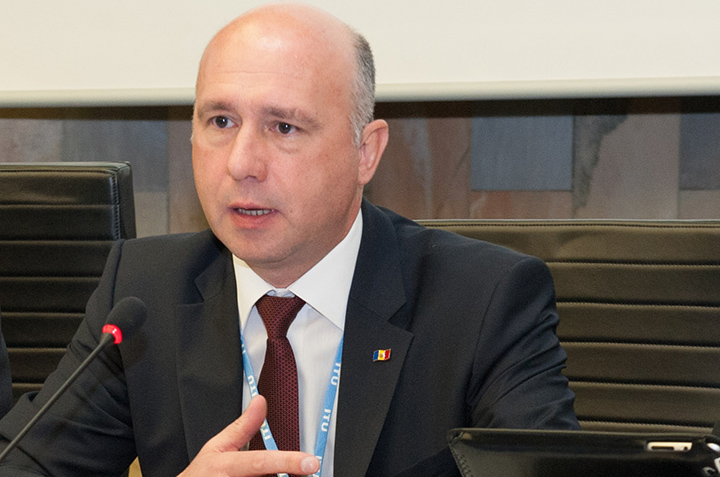 Moldovan Prime Minister Pavel Filip said his government is committed to European integration and expressed the hope that the country’s next president will share that same commitment.

Moldova will hold its first direct presidential elections on October 30. Like in past elections, this one has split voters between pro-Europe and pro-Russia candidates.

“I hope that the next president will fully understand the need for keeping Moldova’s EU ascension on a smooth and stable path,” said Filip.

Moldova has paid a heavy price for its pro-Europe tilt. In 2014, Russia banned the import of Moldovan agricultural products after the government in Chișinău moved to deepen political and economic ties with the European Union.

In February, the European Council reaffirmed its commitment to “strengthening the political association and economic integration” between the EU and Moldova. It also confirmed that all twenty-eight member states had ratified the Association Agreement.

Moldova also faces security challenges from Russia. In 1990, Russian-backed separatists in Transnistria, a strip of territory in eastern Moldova, declared independence. While it is not internationally recognized, Transnistria is locked in a frozen conflict and Russian troops frequently conduct exercises in the territory. Moscow uses so-called gray zones—like Transnistria, Abkhazia, South Ossetia, and Crimea—to put pressure on and destabilize its neighborhood.

Moldova, Europe’s poorest country, was rocked by a political crisis in January of 2015 after $1 billion was found to be missing from Moldovan banks. The scandal led to the arrest of Vlad Filat, a former prime minister; deterred the International Monetary Fund (IMF) from negotiating a new loan program with Moldova; and unleashed a backlash against Moldova’s ruling elite. [The IMF has since reached a staff-level agreement with Moldova for a $179 million, three-year loan agreement conditional on the government carrying out reforms. The deal must be approved by the IMF’s board in October.]

In January of 2016, Filip was appointed prime minister after the previous government was ousted in a no-confidence vote. He is Moldova’s fifth prime minister since 2009. Filip’s appointment triggered massive protests because of his ties to Vladimir Plahotniuc, a prominent oligarch and deputy chairman of the ruling Democratic Party of Moldova. The prime minister refused to step down.

Filip, who described Plahotniuc as “a force for good for Moldova,” said: “The truth is we inherited a broken car, without brakes, that was going downhill.”

“In the eight months since taking office, we repaired the car and put it back on the path toward Europe. We are now reliable economically and politically,” he added.

Pavel Filip commented on a wide range of topics in an e-mail interview with the New Atlanticist’s Ashish Kumar Sen. Here are excerpts from our interview.

Q: In 2014, around $1 billion was embezzled from three major Moldovan banks. What is your government doing to address the problem of rampant corruption and improve transparency in Moldova?

Filip: The banking scandal caused one of the biggest economic, political, and social crises our country has ever faced. It was an indefensible tragedy that shook our country’s faith in its government and the authorities responsible for safeguarding the banking system and judiciary. Our government is determined to clean up the country and restore trust through confidence-building measures, particularly banking sector and judicial reforms, and put Moldova back on the path toward progress.

I have always been a reformer, first demonstrated when I was IT minister when I brought a fresh, private sector perspective to government. As prime minister, together with my cabinet ministers, we initiated reforms from day one—and we are fortunate to have a very good partner in the parliamentary majority.

After passing strong anti-corruption and judicial reform legislation, we are now focused on implementation. There are high expectations for the new National Anticorruption Center, and we are already seeing results: prosecutors have launched a comprehensive inquiry to identify the guilty parties in the bank fraud case, and we were able to recover part of the stolen assets. At the same time, we are cutting red tape, working closely with the private sector via the Prime Minister’s Economic Council, to build transparency and restore the trust of the Moldovan people.

The truth is we inherited a broken car, without brakes, that was going downhill. In the eight months since taking office, we repaired the car and put it back on the path toward Europe. We are now reliable economically and politically. Challenges remain. While there are detractors— who attack our progress without offering any constructive policy alternatives—our government is determined to clean up the country. We have put aside political vanity, rolled up our sleeves, and started working; we appreciate the responsibility on our shoulders to put Moldova back on track with regard to the economy, EU integration, and international credibility.

Q: Besides corruption, the power wielded by the oligarchs is a significant problem that is often cited as one reason for the growing popularity of the pro-Russia camp in Moldova. What steps are you taking to curb the influence of oligarchs, in general, and Vladimir Plahotniuc of your own Democratic Party of Moldova, in particular?

Filip: For as much progress as our government has made in a short time, Moldova is still a country in transition. The presence of “oligarchs” and tycoons is something we deal with and are moving away from as our country firmly finds its footing in Europe and the West. We must be a nation committed to the rule of law. If there is illegal activity, it must be ferreted out and the guilty parties must be held accountable. As prime minister, I stand by this as I know that our country has a real chance for independence and sovereignty if its leadership is courageous.

In truth, Vladimir Plahotniuc is a force for good for Moldova. He is committed to his country, prosperity, and progress; he seeks consensus on reforms through his role in the Democratic Party of Moldova (PDM). Business leaders, like Plahotniuc, are helping Moldova build a vibrant and modern private sector, creating jobs, encouraging investment, and developing new industries.

In the new Moldova, every player sticks to his role. While it is normal to coordinate within the PDM on reforms, I lead government action in partnership with colleagues such as speaker of the parliament, Andrian Candu. Our country needs reforms, and the truth is the political class kept avoiding them and simply fought internally. For once, we have a team in power that prefers working over talking. Of course, this type of proactive, constructive way of governing is not welcomed by our political opponents, who prefer to fuel disruption and conspiracy theories instead of helping the country and its citizens. However, you can’t pay salaries and pensions by just wining, dining, and conspiring. The opposition needs to understand that attacking our leaders and demonizing our actions will not help the country.

Q: What is your government doing to ensure that the presidential election in October is free and fair?

Filip: This democratic exercise has huge significance—this will be the first direct presidential election, the result of civil society and public demands, which were approved by a Constitutional Court decision. There is a lot of hope surrounding the election, from our citizens as well as the international community. I want to make sure that this election is as fair, as democratic, and as transparent as it can possibly be. We will have domestic and foreign observers, and the relevant electoral authorities will be ready to investigate any and all complaints that anyone may have about any part of the process. We sent this signal to all citizens as well as international stakeholders. We hope that the opposition supports the process in a constructive and professional way and we invite them to participate.

Q: Why is this an important election for the West and for Moldova’s European aspirations, and why is it important for Moldova to be pro-European?

Filip: Moldova hasn’t reached its full potential in terms of democratic consolidation, economic stability, and international aspirations, partly because of our domestic problems and partly because of foreign influences that have not always worked in our favor. We need to stay on course, but that requires popular support.

This government is working hard to present our EU integration to the people as it is: a consistent, efficient process that will help us achieve stability and prosperity within the European family. I hope that the next president will fully understand the need for keeping Moldova’s EU ascension on a smooth and stable path. This government, in place until 2018, will remain strongly pro-European. I’m hoping for good teamwork; we must keep Moldova’s best interests at the center of our hearts and minds.

When thinking about why it is important for Moldova to be pro-European, the example of Romania comes instantly to mind. Our good neighbor and constant friend is the best example of what the EU brings in terms of increased stability, economic opportunity, and the fight against corruption.

Q: What is Russia’s impact—from troops in Transnistria to media propaganda—in Moldova, and what is your government doing to address this challenge?

Filip: Regarding the issue of propaganda, we are now working to pass a new audio-visual code that would limit its impact. For Moldova to continue to grow, it is important for our citizens to have access to native content that is free from outside influence. I would also stress the need for civic education, and I look forward to working within civil society to improve this.

As for the Transnistria issue, we are working closely with our international partners to find a workable solution. Important steps were made on environmental protection and the recognition of local university diplomas, and we are confident we can do more. At the same time, it’s election season in Tiraspol and Moscow as well, so we prefer a deliberate approach to Transnistria rather than an emotional one.

Q: Are you concerned that Moscow will stir up trouble in Gagauzia?

Filip: Gagauzia is part of Moldova’s territory. We respect their autonomy and are sure there is a recipe for mutual success—namely through more investment and more development funding on our way to EU reforms. Improving welfare, creating employment, and encouraging higher standards of living mitigate many problems.

Q: What impact have Russian sanctions had on Moldova?

Filip: In the short term, our farmers had to look elsewhere—we were forced to diversify and find new export markets. Romania gave a helping hand, and the EU opened its market for us; we are incredibly grateful for that. So, in fact, we were able to use this as an opportunity for growth, increasing the visibility of our goods and gaining access to more Western markets. A lot of people love our bio products, and our exports will continue to grow. However, business is business—it should not become personal. Russia remains an important market for us and we want to work constructively with them. We hope that Moscow understands that Moldova’s products are still traditional and unique, and in an industrialized world, this is harder to find.

Q: At the same time, Moldova is deeply dependent on Russia for its energy needs. What is Moldova doing to reduce this dependence?

Filip: This dependency is a post-Soviet relic, and we are trying to diversify our energy suppliers and sources by working with our neighbors, particularly Romania. Moldova needs to focus on concrete projects like the Iasi-Ungheni pipeline and improving our energy efficiency. I hope that a decade from now, Moldova becomes not only more energy independent, but also a key regional player in the energy sector.

Image: “The truth is we inherited a broken car, without brakes, that was going downhill,” said Moldovan Prime Minister Pavel Filip who took office amid political turmoil in January. (ITU Pictures)