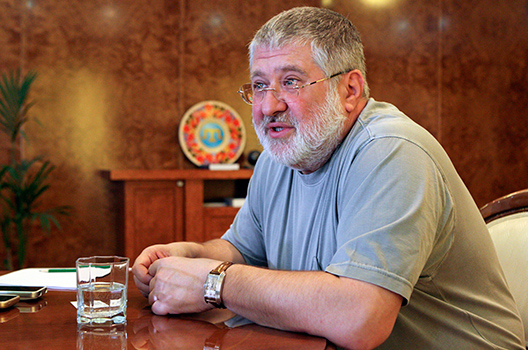 A court in Moscow this week ordered Russian authorities to seek the arrest of Ukrainian billionaire and provincial governor Ihor Kolomoisky for alleged killings of civilians amid Russia’s proxy war in southeast Ukraine. As owner of Ukraine’s biggest bank, plus airlines and other companies, Kolomoisky has been ranked by Forbes in recent years as Ukraine’s third-wealthiest “oligarch” – and in the current conflict, he has been a staunch supporter of the government in Kyiv against Russia.

Last month, criminal investigations against Kolomoisky and Ukraine’s interior minister Arsen Avakov, were announced by the Investigative Committee of the Russian Federation, (Следственный комитет Российской Федерации). The Investigative Committee is Russia’s most powerful investigative agency, one that is often compared to the United States’ FBI but that is controlled directly by President Vladimir Putin. The Kremlin has used the committee to prosecute Putin’s opponents, including business magnates and political dissenters.

Hundreds of civilians have been killed and tens of thousands uprooted from their homes in areas of southeast Ukraine dominated by Russian-backed militias, according to reports by the United Nations human rights agency. “Abductions, detentions, acts of ill-treatment and torture, and killings by armed groups are now affecting the broader population of the two eastern regions [Donetsk and Luhansk provinces], which are now marked by an atmosphere of intimidation and consequent fear,” said a report issued June 15 by the UN Office of the High Commissioner for Human Rights.

International human rights organizations and independent news organizations have blamed the Russian-backed militias and armed gangs for the rise of a “dirty war” in southeast Ukraine. But the Kremlin’s Investigative Committee has turned its own version of human-rights rhetoric against Kolomoisky and other supporters of the Kyiv government.

“Even though he [Kolomoisky] himself has not actually pulled a trigger or killed anyone in the Donbas, his hands nevertheless are covered in blood up to his elbows, and for this he will have to answer sooner or later. He will have to answer for these deaths, as well as the deaths of citizens in Odessa and the Donbas,” said Vladimir Markin, the Investigative Committee spokesman in a statement on the committee’s web site.

The Russian committee accuses Kolomoisky and Avakov of using banned means of warfare during the government’s counterterrorism operations and responsibility for organizing the murder of civilians. They were also accused of being involved in abducting journalists.

The Russian committee and court cannot enforce arrest orders in Ukraine, and in response to the arrest warrant, Kolomoisky’s deputy wrote on his Facebook page that “Ihor asked to pass on that he is not at all worried about a Russian court decision.” Russian authorities and Kremlin-controlled media such as the LifeNews television channel said an international notice for the arrest of Kolomoisky has been issued, but the international police agency, Interpol, includes no mention of him on its website.

In the Russian-Ukrainian war, Kolomoisky has played a vital role since the interim government in Kyiv appointed him in March as governor of the strategically vital Ukrainian province of Dnipropetrovsk. In part by using his own money, Kolomoisky has turned his province into something of a bulwark against the spread of the Russian-backed militias that have seized control of parts of the neighboring province of Donetsk. He has supported and equipped a pro-government volunteer battalion and announced bounties for the capture of pro-Russian separatist fighters or their weapons.

In what is his blunt-spoken style, Kolomoisky also has gotten personal with Putin, publicly calling him a “schizophrenic shorty.” A day later, Putin responded in a press conference, calling Kolomoisky “just a unique crook.”

Image: Ihor Kolomoisky, billionaire and governor of the Dnipropetrovsk region in Dnipropetrovsk, Ukraine, on May 24, 2014. REUTERS/Valentyn Ogirenko