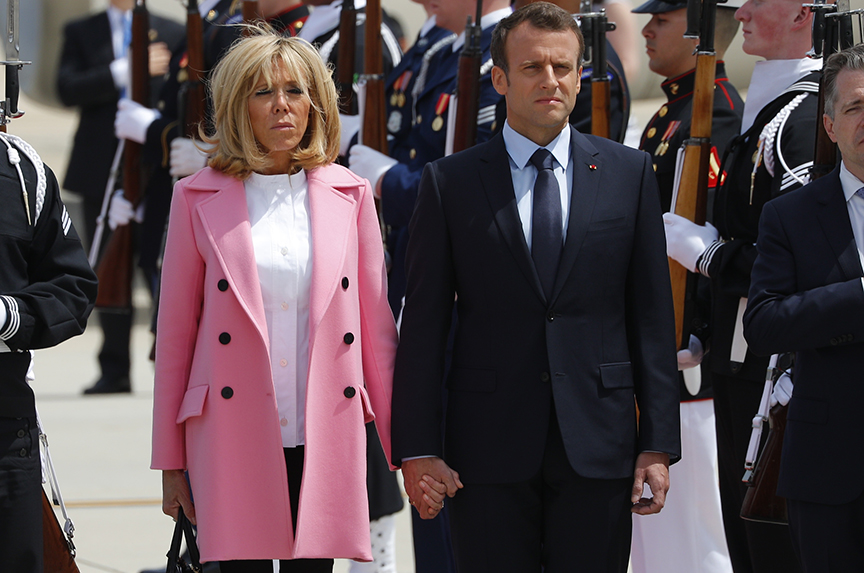 French President Emmanuel Macron and his wife, Brigitte Macron, arrived at Joint Base Andrews in Maryland on April 23 at the start of a state visit to the United States. US President Donald J. Trump will host the Macrons at the White House on April 24. (Reuters/Brian Snyder)

By now the French president is well recognized as being the world leader most esteemed by, and in closest contact with, the US President Donald J. Trump. Here lie the risks.

Constantly swirling around Trump is a virtual vortex of vulgarity. The French people are quick to recognize vulgarity and despise it in their leaders. They disliked Nicolas Sarkozy for his bling-bling demeanor and François Hollande for his lack of a presidential profile, delivering croissants on a motorbike in the dawn’s early light to his B-movie mistress.

Trump is negatively viewed in France by a vast majority of the French population but the French, unlike the British, find it positive that their leader should engage with the American president. So, the solution is to keep the conversation at the refined and elevated plane of the state visit. The riskiest moment will be the private dinner between the two couples at Mount Vernon; it is then that a statement by Macron could later be deformed by Trump making it public. Macron should stick to the storytelling: he might not wish to teach Trump that there were four times as many French soldiers and sailors as there were American colonists at the decisive Battle of Yorktown where the American War of Independence was won; but Macron could emphasize the new discoveries in the French-American relationship. For instance, the letters just purchased by Mount Vernon of the Marquis François Jean de Chastellux, third in command of the French expeditionary force alongside La Fayette and Rochambeau, part of a trove of correspondence found in Chastellux family archives in Burgundy and which shed new light on the origins of the French-American relationship.

The second risk also arises from Macron getting too close to Trump, but this time the danger is not in the perception by the French public but the perception by Trump himself. Since inauguration, Trump has repeatedly displayed an unwillingness to be controlled by anybody. Reince Priebus, Steve Bannon, H.R. McMaster and many others have paid the price of Trump’s rebelliousness. Macron needs to be careful not to say he can control Trump, for two very good reasons: first, it appears that nobody can control Trump so Macron could soon be proved wrong; worse, because Trump spurns those who affect to control him, Macron could find his influence with Trump weakened. After the recent retaliatory strikes in Syria, Macron told French television that he had persuaded Trump to limit the targets to chemical weapons facilities and that he had convinced Trump to keep US troops in Syria. It would be best to stop there, to exercise the influence but not advertise it.

Assuming the decorous state visit format and Macron’s own restraint can limit these two risks, the visit provides two important opportunities for Macron: first, to reinforce France’s position in the United States; then, as a result of that, to enhance France’s ability to exercise power globally, especially in the Middle East.

Macron has given a pre-visit interview to Fox News, taking the battle to the enemy so to speak, and he will conduct a joint news conference with Trump on April 24 and deliver a speech to a joint session of Congress on April 25, as well conduct a town hall with students. No doubt he will cover, in these public statements, the basics of the French-American relationship: history, culture and business, which is represented by nearly $300 billion in reciprocal foreign direct investment, nearly 10,000 French and US companies operating in each other’s markets providing nearly 1,000,000 jobs in France and the United States and more than $100 billion in mutual trade flows. But Macron also has the opportunity to describe a France that is modern, with the largest start-up campus in the world in central Paris, Station F, and a vibrant entrepreneurial scene which has seen French companies pull off repeated successes at the Consumer Electronics Show in Las Vegas. There are thousands of French engineers in Silicon Valley and Macron might renew his call for US techies to come to France to do research, start companies, and get rich.

At the same time, politically and militarily, France is currently positioned as the tightest US ally. Britain’s special relationship with the United States has suffered long-term damage from Brexit, which has created domestic political paralysis in the United Kingdom and denied Britain any power of initiative in global affairs until its own house is put in order. Macron can easily depict France not only as America’s oldest ally—because Louis XVI and Vergennes wanted to deny the British their American empire, just as the French had lost theirs to the British in the Seven Years’ War a decade or so before the American Revolution—but he can also depict France, in today’s world, as America’s closest ally.

Macron thus procures a second geopolitical advantage, the ability for France to maneuver more widely. A France—and a French president—seen as first among equals as a US ally will allow Macron considerable leeway to pursue his vision of Europe. The German chancellor, Angela Merkel, whose relationship with Trump is strained, then becomes an enabler, getting her fissiparous coalition in line rather than championing innovative policies. In the wider world, ensuring that the United States is on-side and that Trumpian volatility is at least somewhat neutralized, means France can propose and engineer diplomatic solutions which Trump’s baleful United States no longer has the legitimacy to initiate. The best example of this is the Syrian civil war. The powers that need to align are: Turkey, a recalcitrant NATO ally but with a leader to whom Macron speaks frequently; Iran, which has no relationship with the United States but does with France; Russia, where Trump may be most compromised and where Macron has stood up to Russian President Vladimir Putin while keeping a dialogue open; and Saudi Arabia and Israel, where the US relationships are so tight as to be viewed with suspicion.

Just as France, upon analysis of the question, was the only country in the world equipped with all the necessary attributes to be able to successfully carry off the COP21 Paris Climate Agreement, so France may be the only country which can successfully steer the Middle East toward peace, but only if the United States cooperates.

Macron has skillfully portrayed his policy differences with Trump—on climate change, on trade—as mere issue-by-issue disagreements. In reality, they result from a completely different world view: Trump is heedlessly dismantling the liberal international order that was created and cultivated by the United States; Macron is defending that liberal international order in the face of nationalist, populist forces emanating not least from the United States.

Macron’s “bromance” with Trump results from the fact that Macron is everything that Trump would like to be. Though not from a privileged or moneyed background, Macron is a product of the global establishment. Macron has endeared himself to Trump by showing Trump a respect and an understanding that the establishment has always denied Trump. If Macron continues to tread that path, with his habitual dignity and discretion, the state visit will be a success and France will emerge with more prestige and more power.