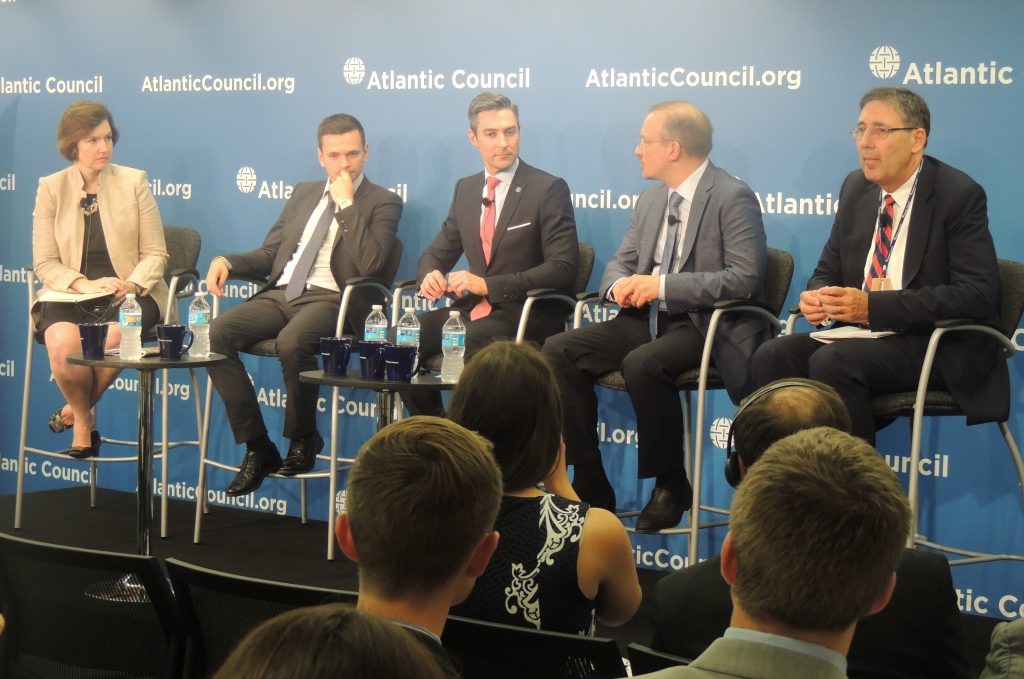 Russian President Vladimir Putin is violating a February 2015 ceasefire agreement by continuing to send troops and weapons into Ukraine in a blatant attempt to destabilize the country, according to an Atlantic Council report issued May 28.

The report, Hiding in Plain Sight: Putin’s War in Ukraine, draws on open source material and uses social media posts to track the movement of Russian soldiers and equipment across the border into Ukraine.

“There would be no conflict in Ukraine today but for Putin’s strategy to provoke one,” said Damon Wilson, the Atlantic Council’s Executive Vice President of Programs and Strategy, and one of the report’s five co-authors. “We don’t have a Ukraine problem, we have a Putin problem.”

The 36-page report says satellite images confirm the movement of Russian troops and camp buildups along the Ukrainian border, and that Russia sends soldiers and military equipment from these “staging grounds” into Ukraine. The most recent photograph analyzed was that of a Russian soldier taken at a checkpoint near Debaltseve on Feb. 23.

The report further asserts that Russian commanders order their troops to conceal the identifying features of military vehicles and remove insignia from their uniforms before joining separatist forces in eastern Ukraine. In addition, the report says, Russian arms and munitions— including shoulder-launched surface-to-air missiles and landmines—end up in the hands of separatists.

Finally, it says that Russian forces in Ukraine have, during key offensives, received cover from Russian territory—a finding based on a combination of satellite data, crater analysis, and open source materials.

The report’s conclusions contradict claims by Russian officials that there are no Russian troops in Ukraine—a claim Putin repeated April 16 on Russian TV. It recommends that Western governments counter the Kremlin’s “hybrid warfare” and formulate “a more comprehensive transatlantic strategy to deter Russia’s aggressive actions.”

Why is Russia determined to keep its role in Ukraine a secret?

Putin has two reasons for doing so, said John Herbst, Director of the Atlantic Council’s Dinu Patriciu Eurasia Center and another of the report’s co-authors.

“He’s playing both to Western weakness and the strong feelings of his own people against war in Ukraine,” Herbst said in a panel discussion moderated by Susan Glasser, editor of Politico.

Wilson said Putin’s hybrid warfare is not just limited to Ukraine, but extends to countries such as Moldova, Georgia, and Kazakhstan, and is aimed at preventing their shift toward the West.

“Most dangerously, we see some of these tactics aimed at NATO allies and European Union members to divide them by exploiting divisions within our nations and among our allies, and perhaps an ultimate goal of undermining the solidarity that is at the core of our alliance,” he said.

The United States and the 28-member EU slapped sanctions on Russian officials and entities in response to the March 2014 annexation of Crimea. The EU will take a formal decision on whether to extend sanctions against Russia’s financial, defense, and energy sectors at a summit in June. EU leaders agreed in March that those sanctions would remain in place until the Minsk peace agreement is fully implemented.

Herbst said it was highly unlikely that Putin would conduct a new offensive inside Ukraine at least until after the EU summit.

“It serves Mr. Putin well to destabilize the government in Kyiv by seizing small increments of land in Ukraine’s east,” he said. “That prevents the government in Ukraine from focusing on reform, on the one hand, and it does not cross the threshold, which might provoke a stronger Western response.”

Wilson said he hoped the Atlantic Council report would encourage policy makers to extend the sanctions.

The report’s other co-authors are Maksymilian Czuperski, Special Assistant to the President of the Atlantic Council; Alina Polyakova, Associate Director in the Dinu Patriciu Eurasia Center; and Eliot Higgins, a Visiting Research Associate in the Department of War Studies at King’s College London.

The report’s launch coincided with the release of the English version of a separate report based on material gathered by slain Russian opposition leader Boris Nemtsov. Putin.War details Russia’s annexation of Crimea, and the deployment of Russian troops in eastern Ukraine.

“Putin destroyed the reputation of our country by backstabbing Ukraine,” said Ilya Yashin, a leader of the pro-democracy Republican Party of Russia-People’s Freedom Party (RPR-Parnas). Nemtsov led RPR-Parnas until his death.

Yashin discussed the collection of evidence of Russia’s involvement in Ukraine from the families of Russian troops. “We put together this report because we are patriots of Russia. We believe Putin’s war in Ukraine is destructive for our country both politically, economically, and morally,” he said.

Putin this week signed a decree to make secret the losses of Russian troops during “special operations” in peacetime.

The decree is a “misplaced effort to cover up what everyone knows, and that is that Russian active-duty military personnel are fighting and dying in eastern Ukraine and that the Russian government is denying it,” State Department spokesman Jeff Rathke told reporters at the daily briefing May 28.

Sergey Aleksashenko, a Nonresident Senior Fellow at the Brookings Institution and part of the Atlantic Council panel, said Putin’s decree is likely aimed at intimidating the families of Russian soldiers dying in Ukraine.

Russian authorities already pay between one million and three million rubles to buy their silence, Aleksashenko said. “If this war continues and if the number of casualties grows, it will not be possible to hide this information,” he added.

Nemtsov had been documenting Russia’s military involvement in Ukraine when was assassinated near the Kremlin in Moscow on February 27. His associates completed the report after his death.

“Many people believed that after Nemtsov’s murder … they will stop all this aggression,” said Yashin. However, that may not be the case. This week a Nemtsov ally, Vladimir Kara-Murza, is clinging to life in a Moscow hospital after mysteriously falling sick.

“Putin.War” concludes that Russia spent $1 billion in the first ten months of the war in Ukraine.