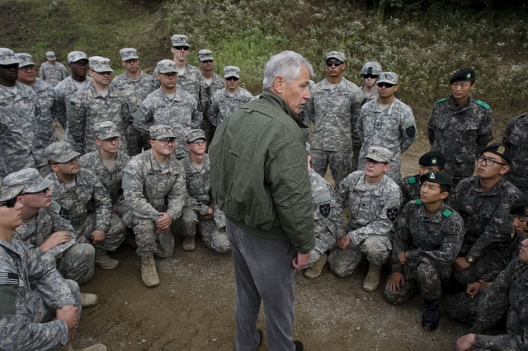 When he was chairman of the Joint Chiefs of Staff, Admiral Mike Mullen forewarned “the single, biggest threat to our national security is our debt.” While not exclusively related to the $16.7 trillion debt, the government shutdown offers an unfortunate opportunity to see the impact on national security when the government lacks an operating budget.

The shut down also illustrates how connected the federal workforce is to the defense industry. Because 45 federal workers at the Defense Contract Management Agency are furloughed, Sikorsky may halt Black Hawk helicopter production and furlough thousands of civilian workers. Less dramatic, but new delays are being created for the F-35 program because “The shutdown is negatively affecting our ability to conduct flight tests and other areas of the program, such as development, aircraft deliveries and sustaining the fleet, are also at risk of delay and disruption.” Further delays will add to the already over-budget aircraft. Other companies, like Huntington Ingalls Industries, are funded through long-term contracts so there is little impact on aircraft carrier construction.

With about 800,000 federal workers laid off (to include up to 70 percent of the US intelligence community) The Director of National Intelligence James Clapper testified, “I’ve never seen anything like this. From my view, I think this—on top of sequestration…seriously damages our ability to protect the security and safety of this nation and its citizens…. This is not just a beltway issue. This affects our global capability.” With fewer analysts at their screens, indications and warnings of significant events will be diminished, policymakers not furloughed have less intelligence to base their decisions, and intelligence collected piles up. DNI spokesman Shawn Turner wrote: “The impact of the shutdown on the Intelligence Community’s mission is not static, it’s cumulative,” Turner wrote. “The employees who are on the job are stretched thin. They’re focused on the most critical security needs.”

While in South Korea during the shut down, Secretary of Defense Chuck Hagel had to defend America’s readiness and said, “We’re going to be able to fulfill our mission of keeping this country … secure, we will fulfill our mission of maintaining the alliances we have and our troops in South Korea [and] Japan, and other treaty obligations.” Since both South Korea and Japan are treaty allies of the United States and face both an unpredictable nuclear-armed North Korea and a rising China, the political depth of the alliance is rarely questioned. Yet, the limited ability to rebalance US forces to the Pacific and likely US force reductions over the next five years will challenge both countries to assume a greater share of the defense burden. Japan’s defense budget showed modest growth of 0.8 percent and South Korea is closer to assuming operational control of its forces.

While the United States would like its allies to assume a greater share of defense costs, rapid military escalation could be destabilizing. To overuse a phrase, US credibility is diminishing in the region not necessarily as a model for governance, but as a reliable partner. With much talk of a pivot to the Pacific over the last two years, the Middle East continues to capture US policymakers’ attention. My colleague Nick Gvosdev sees “governments in the [Pacific] region [are] skeptical about the staying power of the Obama administration, there is an eerie sense of deja vu. The president already has a track record of losing focus on Asia when faced with domestic challenges.” But until there is certainty in the defense budget, credibility and readiness will decline.

Derek S. Reveron, PhD, is a professor of National Security Affairs and the EMC Informationist Chair at the US Naval War College in Newport, Rhode Island. The views here are his own and do not necessarily reflect US government policy.

Image: Secretary of Defense Chuck Hagel talks with troops from the 2nd Infantry Division in the Republic of Korea Sept. 30, 2013. (Photo: Erin A. Kirk-Cuomo/Department of Defense/Flickr)