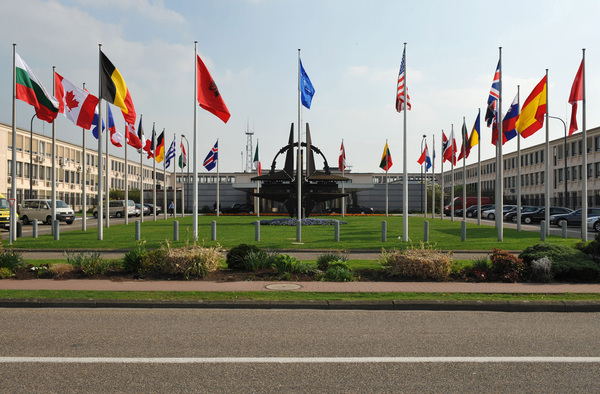 In the 1950s the Americans used to have a NATO joke (they have about one per decade). NATO, they said, was like the Venus de Milo, all SHAPE (Supreme Headquarters Allied Powers Europe) and no arms.  You are meant to laugh now.  The essential point was that NATO was fast becoming lots of military headquarters with no military forces.  At the time it was but a dream but some sixty years on NATO is indeed lots of military headquarters with few military forces. Whoever said we Europeans no longer take the long view?

I have just written the report for a big conference on the Alliance entitled “NATO Partnerships in a Shifting Strategic Landscape” and I could not but recall that joke.  In a sense the joke captures NATO’s essential dilemma – as the world gets bigger, NATO seems to be making itself smaller.

It is a contradiction we need to resolve and fast.  Only yesterday a NATO member, Turkey, shelled Syria.  One of the many problems is that today’s distinction between NATO members and partners is entirely artificial.  Indeed, it is hard to imagine any sizeable NATO operation ever again taking place without partners.  During Operation Unified Protector over Libya there were on occasions as many partner states taking part as members.  And yet, in principle at least, non-participating members had more influence over critical NATO decisions than fully-participating partners. That is the strategic equivalent of defying political gravity and if it continues poses a greater threat to the future credibility and viability of the Alliance than any perceived failure in Afghanistan.

Quite simply NATO’s place and utility in a changing world will be defined as much by the strategic partnerships it forges as any internal strategy, however grand sounding its title.  Hitherto, the Alliance’s internal balance has been guaranteed by the essential equation of NATO strategy – the more grand sounding a document the less its actual use.  But that was then and this is now.  Within a decade all strategic relationships will have been transformed by the rise of Asia.  Be it NATO membership and its now plethora of partnerships they must all be seen in that context, i.e. part of a world-wide web of security partnerships.

Why?  Because NATO’s true utility can only be defined once its place in American grand strategy has been established and that is a-changing.  Especially so as the more the Europeans cut defense the more reliant they are on the US.  Unfortunately, implicit in the ‘pivot’, the ‘rebalancing’, the ‘global Yank’ (shiver) or whatever one wants to call Washington’s potential zweifrontenskreig, a new strategic contract beckons between NATO and its erstwhile member America.  That contract is essentially simple: NATO must take care of security for both members and partners in and around Europe to ease pressure on the US elsewhere. If not the American security guarantee will over time fade.  Of course, the Americans will stay for the big stuff—Iran—but much else will fall to the Europeans.

Given the parlous state of Europe’s armed forces, lessening risk will thus mean shifting the balance from collective defense and crisis management to co-operative security and that means partners and partnerships much more tailored to the needs of the individual states critical to Alliance security.  The needs of Finland and Sweden as partners are a world away from the needs of, say, Egypt, Libya, or Saudi Arabia.

The trouble is that it is bureaucracy and resource-constraint that is driving NATO’s partnership policy, not strategy.  Last year to make things simpler for the NATO-crats a new Partnership Co-operation Menu was offered.  The aim was to centralize the various partnerships into something far more ‘efficient’. In fact, all it did was to paralyze partnership as certain member-states were given yet another opportunity to block Alliance development so that they could pursue their own narrow agendas.

At the military level such grandstanding is becoming dangerous. NATO could become a military interoperability school, critical to doing military things together and better and thus supporting the flexible coalitions of both members and partners that are the future for all Alliance military operations.  However, until the essential divide with the Alliance is resolved between NATO globalists and NATO’s little Europeans it is difficult to see the Alliance being anything other than a school for defense scoundrels, who find themselves forever in detention for not having made sufficient effort.  Still, enough about my school days.

Of course NATO has no ambition to be a global Alliance but it still has a critical role to play as a cornerstone institution in the world-wide security web.  For that reason the Alliance must act now to forge the twenty-first century partnerships central to its future credibility.

If not then NATO will simply become the Venus de Milo’s fat sister – no shape and no arms.