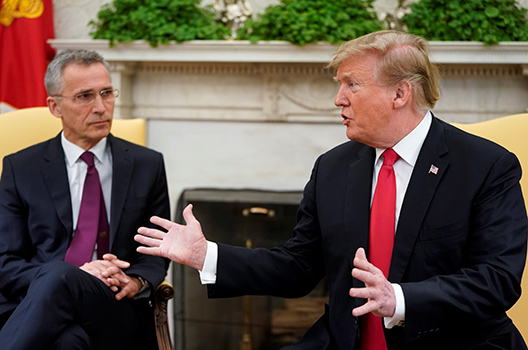 As NATO celebrates its 70th anniversary this week expect to hear one message loud and clear: the Alliance is strong and united.

In July 2018, US President Donald J. Trump plunged NATO’s Brussels Summit into chaos by excoriating allies on the subject of defense spending and threatening to pull the United States out of the Alliance.

This time will be different.

A senior State Department official said in a background briefing on April 2 to expect the message emerging from the meetings this week to be: “NATO remains strong and unified.”

“We have a very strong foundation of shared democratic values. The Alliance has brought seventy years of peace, stability, and prosperity to its citizens. That is a cause to celebrate,” the official said, adding, “But [NATO] is also adapting to ensure that we can do the same into the future.”

The official maintained that the US commitment to NATO remains firm. “We have consistently reaffirmed our support for the Alliance, including for collective defense under Article V,” the official said, adding, “The list of officials, from the president to the vice president, the secretaries of state and defense who have underscored this, is long.”

These will be comforting words to the United States’ allies in the Alliance.

The State Department official maintained that “the United States is better able to address challenges across the globe, whether militarily or politically, because of the NATO alliance.”

The first and only time that NATO has invoked its collective defense clause enshrined in Article V of the Washington Treaty was after the United States was attacked on September 11, 2001. “The value of the Alliance to us was most manifest, of course, on that date,” the State Department official said.

The celebrations this week will make history for at least two important reasons.

First, Jens Stoltenberg’s address to US lawmakers on April 3 will be the first time that a secretary general of NATO has addressed a joint session of Congress.

The celebration comes amid pressure from Trump on Alliance members to ramp up their defense spending in order to meet a goal agreed to at NATO’s Wales Summit in 2014 for each member state to spend two percent of their GDP on defense by 2024.

Stoltenberg’s annual report for 2018 confirmed that so far seven states have met that target. As member states have increased their defense spending the secretary general has been quick to credit Trump.

Defense spending will be on the agenda when foreign ministers of the Alliance’s member states meet in Washington this week.

The State Department official underscored the importance of Alliance defense spending. “Investment by all allies in their national defense is necessary to ensure that NATO collectively has the capabilities for an effective defense, incredible deterrent, to meet current and emerging threats,” the official said, noting that “the threat landscape has changed.”

The formal program gets underway on the evening of April 3 when US Secretary of State Mike Pompeo will host a reception at the Andrew W. Mellon Auditorium.

The choice of venue is laden with history. On April 4, 1949, the original twelve allies signed the North Atlantic Treaty at the Mellon Auditorium. This is why the treaty is often known as the Washington Treaty — for the city in which it was signed.

The original charter, which is housed at the National Archives up the street from the Mellon Auditorium, will be on display during the reception.

On April 4, the foreign ministers will participate in two plenary sessions and a working lunch at the State Department.

The first plenary session will focus on Russia. At this session, the ministers are expected to:

The second plenary session will focus on Afghanistan, the success in the war against ISIS, and NATO’s new training mission in Iraq.

At the working lunch, the ministers will discuss the transatlantic alliance and the importance of burden-sharing.

“It will also be an opportunity to have an honest discussion of the progress we’ve made to date on burden-sharing,” the senior State Department official said, adding, “Of course, there’s also still more work to be done, and as the secretary general said in Brussels, there needs to be a new sense of urgency associated with this.”

Trump met Stoltenberg at the White House on April 2. Stoltenberg thanked Trump for his “strong support” and said “your message is having a great impact” on allies’ defense spending.

US Vice President Mike Pence said the president’s leadership had “resulted in a strengthening of the NATO alliance.”