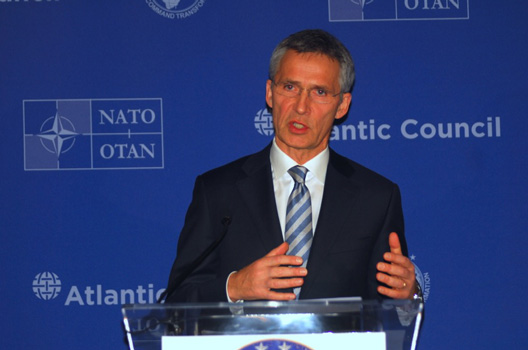 Europe’s belt-tightening on defense at a time when Russia and China have ramped up military spending endangers NATO, the alliance’s Secretary General Jens Stoltenberg said March 25.

“While we have been cutting our defense budgets, others have invested heavily,” Stoltenberg said in his keynote address at the NATO Allied Command Transformation seminar. The Atlantic Council’s Brent Scowcroft Center on International Security co-sponsored the event.

“Russia is investing in new tanks, new aircraft, new ships, new submarines and long-range cruise missiles. China is testing its first carrier battle group and building a second. And it has just announced a further 10 percent increase in its defense budget,” he added.

Of the 14 NATO countries that have so far announced their military budgets for 2015, only the United States and Estonia have surpassed the 2 percent of national GDP every alliance member pledged to spend on defense at the last NATO summit in Wales in September 2014. US taxpayers currently fund around 75 percent of NATO’s expenditures.

Poland has promised to meet that goal by 2016—when NATO will hold its next summit in Warsaw.

Stoltenberg warned his audience that NATO’s 28 members “no longer have a monopoly” on advanced military technologies.

“In Europe, few major programs in cutting-edge capabilities are being launched, potentially degrading our long-term capabilities and our research and development base, With lower demand, more and more companies are shifting away from defense,” he said.

“We risk losing the skills and the research capacity we would need in a crisis. What we need now is the political will and the resources from NATO member nations to improve our capabilities, to keep our edge now and in the future. The alliance needs an innovation strategy for the coming decades,” he added.

Besides ramped-up military spending by Russia and China, Stoltenberg listed hybrid warfare and cyber aggression as the main threats to NATO.

Stoltenberg said Russia’s annexation of Crimea a year ago, its aggressive actions in Ukraine and the rise of violent extremism in the Middle East and North Africa have “changed our security environment dramatically.”

“We have to face the facts,” he said. “These challenges will not go away anytime soon, so we have to be prepared for the unexpected and stand ready to sustain our efforts for the years to come.”

He accused the Kremlin of using proxy soldiers, unmarked Special Forces, intimidation, and propaganda, “to lay a thick fog of confusion, to obscure its true purpose in Ukraine and to attempt deniability.” All these bear the hallmarks of hybrid warfare which, he said, “seeks to exploit any weakness” through both military and non-military means in order to destabilize countries.

“We are implementing the biggest reinforcement of our collective defense since the end of the Cold War. We are increasing NATO’s presence in our Eastern Allied countries and the readiness of our forces,” Stoltenberg said, noting that the NATO Response Force will more than double to up to 30,000 troops. Its centerpiece is the Spearhead Force of 5,000 troops, with lead elements ready to move within as little as 48 hours.

“At the same time, we are setting up command units in six of our Eastern allies,” said the Secretary General without identifying the six countries.

In that regard, Stoltenberg praised the Allied Command Transformation, which was established in 2002 and which is based in Norfolk, Virginia. Paloméros, former Chief of Staff of the French Air Force, has been SACT since September 2012.

“In a crisis, the first responder will be the nation that is targeted, but NATO must be there to support any national efforts. This is a matter of planning and political will, making sure that we complement and reinforce each other,” Stoltenberg said. “We need to be able to deal with complex evolving hybrid situations, including cyber-aggression.”

Indeed, a crucial component of NATO’s new focus is cyber attacks, which can potentially trigger an Article 5 response. This means that an armed attack on a NATO ally will be considered an attack against the entire alliance, all of whose members are obliged to come to the aid of the victimized country.

“We need to detect and counter cyber attacks early, improve our resilience, and be able to recover quickly,” Stoltenberg said. “A more active cyber policy should be a focus as we plan for Warsaw. Cyber defense is just one of the capabilities we need in order to deal with the changed security environment.”