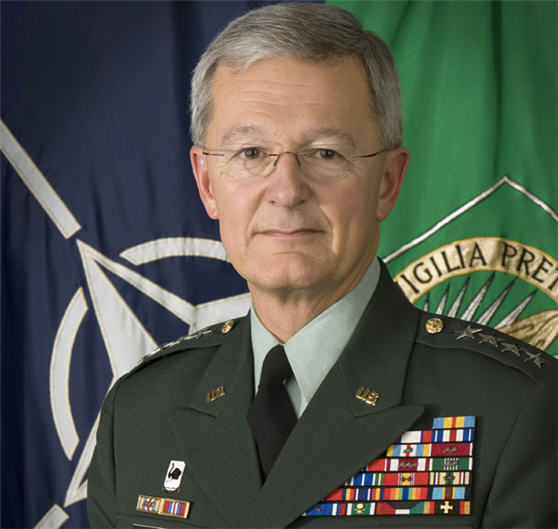 General John Craddock, the Supreme Allied Commander, gave a talk this morning to RUSI, the UK’s Royal United Services Institute for Defence and Security Studies, issuing his boldest pronouncements to date on the problems besetting NATO.  He details the problems with cooperation in the mission in Afghanistan that are familiar to regular readers of this site and then moves on to the longer-term strategic and political issues, boldly declaring:

A brief look at the will of our alliance in the mission in Afghanistan demonstrates some real shortcomings.  In view of the more than 70 national operational restrictions, or ‘caveats’, and our continual inability to fill our agreed-upon statement of requirements in theatre, we are demonstrating a political will that is somewhat wavering.

And it is this wavering political will that impedes operational progress and brings into question the relevancy of the Alliance here in the 21st century.

Clearly, the alliance cannot nor should not do everything everywhere, but we need to define what role we wish to play in today’s security environment.

Craddock offers no advice on making those choices, which are the province of civilian policy makers.  He does venture, however, that, “Whatever we decide NATO’s role is in our world, we must all be certain that our reach does not extend beyond our grasp – that our level of ambition is in step with our political will and our military capability.”

Our alliance continues to operate with a ‘costs lie where they fall’ policy.  The costs of deployment fall to the individual nations committing and deploying troops to theatre.  That means that the nations choosing to bear the burden militarily are the same nations bearing the burden monetarily.  An expeditionary alliance must find a better way.  The alliance needs to further explore the use of common funding.  With a system of common funding, deployment costs can be shared, thereby reducing the strain on national defence budgets.

Moreover, current and future operational challenges and emerging threats in the 21st century security environment do not allow for the traditional bureaucratic, time-intensive processes of the 20th century NATO.   More flexible and rapid decision-making processes are needed if we are to address the challenges we face today and tomorrow.

Our alliance has long operated under the system of consensus, and at the political level, this system has proven powerful in garnering international support and legitimacy.  But do we really need to achieve consensus at every level of committee within the NATO structure?  In my judgement this policy stands squarely in the path of agile decision-making.

There are, Craddock was quick to add, some very positive signs:

[W]hile much work remains to be done, the outcomes of the Defence Ministerial meeting two weeks ago are testament to our willingness to take on these challenges and to work to make our alliance more relevant.  Let me take a moment to highlight those successes.

First, the alliance committed to take an active role in the prevention of piracy off the coast of Somalia.  We should not underestimate the importance of this decision, nor the precedent it sets for our alliance.  NATO’s political leaders approved a mission for which there was no detailed CONPLAN or OPLAN.  We are demonstrating that we can react, quickly, in times of crisis.  It is this capability that demonstrates to the world our relevancy here in the 21st century.

Furthermore, we resolved to increase our expeditionary capabilities by raising the target of the deployability of national land forces.  Regional crises have global effect – to respond to these crises around the world, we must be rapidly deployable.  And finally, we resolved to play a heightened role in the counter-narcotics effort in Afghanistan, an area I believe will have tremendous impact as we in the international community strive toward success in Afghanistan.

These are indeed encouraging developments.  The SACEUR is absolutely right to highlight the lack of political will among several important Alliance member states as a critical issue, to point out that the unanimity requirement as exacerbating this fact, and to note that the funding process makes it all the more difficult.

It’s not entirely clear to me, though, what to do about any of these difficulties. Don Rumsfeld (channeling Shimon Peres) liked to say, “If a problem has no solution, it may not be a problem, but a fact, not to be solved, but to be coped with over time.” It’s likely that Craddock’s issues fall into that space.

Lack of Political Will

The fact of the matter is that most Western European governments, much less their populations, have a hard time seeing their vital interests at stake in Afghanistan.  As Jim Easaw noted in this space earlier, the global financial crisis has made Afghanistan a harder sell, given that the budgets are even tighter.  Similarly, as Nick Gvosdev and others have made clear, there is widespread disagreement as to what to do about Russia, NATO expansion, and related issues owing to domestic considerations that vary from state-to-state.

Perhaps, though, Craddock is hinting at something he thinks not his place to say:  That NATO should pare back its operational aims in accordance with the realities of politics.  That is, if the Alliance is not going to be able to sustain troop levels and funding for missions, it shouldn’t take them on in the first place.

The requirement that all NATO member states agree in order to launch collective military action made sense at the time of the founding, when the Alliance was smaller, more homogeneous, and had a narrowly defined strategic focus.  Expansion, the dissolution of the Soviet Union, and the move into a global expeditionary role has made unanimity both unnecessary as a practical matter and nearly impossible as a political matter.

It’s also unlikely to change.  Why would any of the major states give up their veto power over military actions they consider unwise, much less contrary to their own national interests?  Perhaps newer or prospective members would be amenable to a junior status that came without this ability; then again, they’ve proven the most enthusiastic about participation.

Funding: Costs Lie Where They Fall

This is essentially a corollary to the first two problems, although perhaps the easiest of the three to solve. The lack of political will, mostly in “Old Europe,” to commit the resources to maintain robust standing forces, much less commit existing forces to out of area operations  with little domestic support, creates a free rider problem where those not lacking the will — the United States, the United Kingdom, Canada, and eastern Europe — will bear the cost of most missions.  The veto power will preclude states being forced to commit troops or resources.

It does strike me as plausible, however, that there will be missions — as with Afghanistan — for which there is a strong consensus that it is in NATO’s interest to act even though there’s not much will to do so on the part of much of Western Europe where states will be willing to pony up Euros but not manpower.  Given the ongoing financial sector collapse, however, we may have to wait a bit to test that theory out.