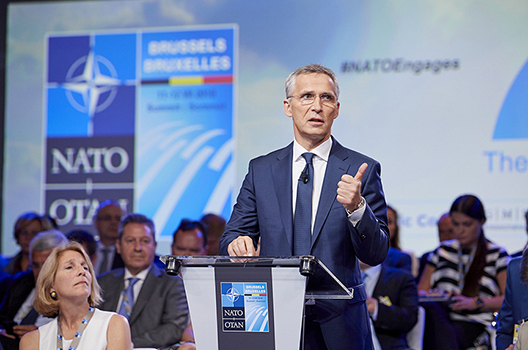 This week will be a celebration of NATO. The military alliance that has ensured an unprecedented period of peace on the European Continent turns 70 on April 4; its secretary general, Jens Stoltenberg, will address a joint session of the US Congress; and the Atlantic Council will co-host NATO Engages, a daylong conference at which US Vice President Mike Pence and Stoltenberg will be among a galaxy of speakers.

The Atlantic Council is jointly hosting NATO Engages along with the German Marshall Fund and the Munich Security Conference in partnership with NATO’s Public Diplomacy Division in Washington on April 3. The theme of this year’s summit is “The Alliance at 70.” NATO Deputy Secretary General Rose Gottemoeller will be the opening speaker.

This show of support for NATO comes at a time when US President Donald J. Trump has pushed allies to increase their defense spending and even threatened to withdraw the United States from the Alliance.

On Capitol Hill, lawmakers have rallied behind NATO introducing legislation that would prevent the president from leaving the Alliance without approval from Congress.

The invitation from House Speaker Nancy Pelosi (D-CA) and Senate Majority Leader Mitch McConnell (R-KY) to Stoltenberg to address a joint session of Congress — the first time that a secretary general of NATO has been invited to do so — underscores the bipartisan nature of support for the Alliance on the Hill.

After his address to lawmakers, Stoltenberg will participate in NATO Engages at The Anthem in Washington. He will share perspectives from NATO’s point of view in a discussion with NBC News Chief Foreign Affairs Correspondent Andrea Mitchell.

On March 28, NATO allies agreed to extend Stoltenberg’s term by a further two years, until September 30, 2022.

On April 4, 1949, the twelve founding members of the Alliance signed the North Atlantic Treaty, more popularly known as the Washington Treaty for the city where it was signed. NATO has since grown to twenty-nine members.

In a recent interview with the New Atlanticist, Rep. Gerald E. Connolly (D-VA), a senior member of the House Foreign Affairs Committee and chairman of the US Delegation to the NATO Parliamentary Assembly, extolled the virtues of NATO and the importance of US membership in the Alliance.

“The fact of the matter is that in its seventy-year history, [NATO] has helped us avoid another global conflict, especially one that engulfs all of Europe. It is probably the longest peacetime period in European history in two millennia,” Connolly noted. “I call that a pretty good track record and it has been worth every penny for the United States because that prevention is worth a lot of cure.”

Connolly will participate in a panel discussion on “The US Role in NATO and Enduring Value of the Transatlantic Bond.” He will be joined in the discussion by Sen. Jeanne Shaheen (D-NH), co-chair of the Senate NATO Observer Group; Sen. Josh Hawley (R-MO), member of the Senate Armed Services Committee; and Rep. Mike Turner (R-OH), member of the House Armed Services Committee. Jane Harman, director, president, and CEO of the Wilson Center, will moderate this discussion.

Launching his Annual Report for 2018 on March 14, Stoltenberg said allies are “doing a lot more together — in more ways and in more places — than ever before.”

The Annual Report concluded that there are now seven allies who now meet the 2 percent of GDP defense spending goal agreed to at NATO’s Wales Summit in 2014. The countries are: the United States, Greece, the United Kingdom, Estonia, Poland, Latvia, and Lithuania. At Wales, allies agreed to reach the target by 2024.

This topic is likely to come up at NATO Engages when German Foreign Minister Heiko Maas participates in a discussion with Karen Donfried, president of the German Marshall Fund of the United States, on “Germany, NATO, and Transatlantic Security.”

While Trump has been critical of the Alliance, Pence has been less so. Speaking at the Atlantic Council’s Distinguished Leadership Awards dinner in Washington on June 5, 2017, Pence reaffirmed the US commitment to NATO’s collective defense clause as enshrined in Article V of the Washington Treaty.

At NATO Engages, Pence will provide a “perspective from Washington.”

Participants in the summit will also discuss the significance of the Alliance and of allies sticking together.

The first and only time NATO has invoked Article V was after 9/11 when allies came to the United States’ side. Tim Brown, who retired from the New York Fire Department and is a 9/11 survivor, will share his perspectives on the importance of allies.

The topic is significant as North Macedonia is on track to become NATO’s thirtieth member after the Alliance extended an invitation to Skopje to begin accession talks last year. The invitation followed a resolution by the governments in Skopje and Athens of a nearly three-decade-old name dispute, which paved the way for Greece to lift its objections to North Macedonia joining NATO.

Turkish Foreign Minister Mevlüt Çavuşoğlu will discuss “Turkey’s Role in NATO and Regional Security Challenges” in a conversation moderated by Margaret Brennan of CBS News’ Face the Nation. And Adm. Manfred Nielson, NATO’s deputy supreme allied commander transformation, will participate in a panel discussion on “The Impact of Innovation on Security: Addressing Hybrid Threats and Startegic Challenges from Emerging Technologies.”

At a time when allies and alliances are being questioned, Atlantic Council President and Chief Executive Officer Fredrick Kempe will moderate a discussion among panelists that will include Polish Foreign Minister Jacek Czaputowicz and US Sen. Sheldon Whitehouse (D-RI), a member of the Commission on Security and Cooperation in Europe, on “Stronger Together: The Importance of Allies in an Era of Great Power Confrontation.”

Wolfgang Ischinger, chairman of the Munich Security Conference, will moderate another important conversation on “Russian Resurgence: Deterrence and Dialogue after the INF Treaty.” Karlijn Jans, a defense policy adviser at the British Embassy at The Hague; US Sen.  Chris Murphy (D-CT), a member of the Senate Foreign Relations Committee; and Latvian Foreign Minister Edgars Rinkēvičs will participate in this discussion.

Trump has decided to withdraw the United States from the Intermediate-Range Nuclear Forces (INF) Treaty, an arms control treaty signed by Ronald Reagan and Mikhail Gorbachev in 1987.

On February 2, US Secretary of State Mike Pompeo announced the US intent to withdraw from the treaty. “The United States takes its treaty obligations seriously and will not stand idle when others flout their obligations,” Pompeo said.

The Trump administration is concerned about Russia’s violations of the treaty, but also about China’s intermediate-range missile capabilities. China is not part of the INF Treaty.

Other participants at NATO Engages will seek to put a human face on the Alliance.  Alfrun Perla Baldursdottir, a NATO political observer in Afghanistan, for example, will participate in a discussion with Atlantic Council Millennium Fellow Zafar Hashemi on “putting people first,” while US Air Force Maj. Matt Wilson will talk about “serving alongside allies and partners.”

Madeleine K. Albright, a former US secretary of state who currently serves as chair of the Albright Stonebridge Group and a member of the Atlantic Council’s International Advisory Board, will close out the conference. Her remarks will focus on “Looking Ahead: The Alliance at 80.”