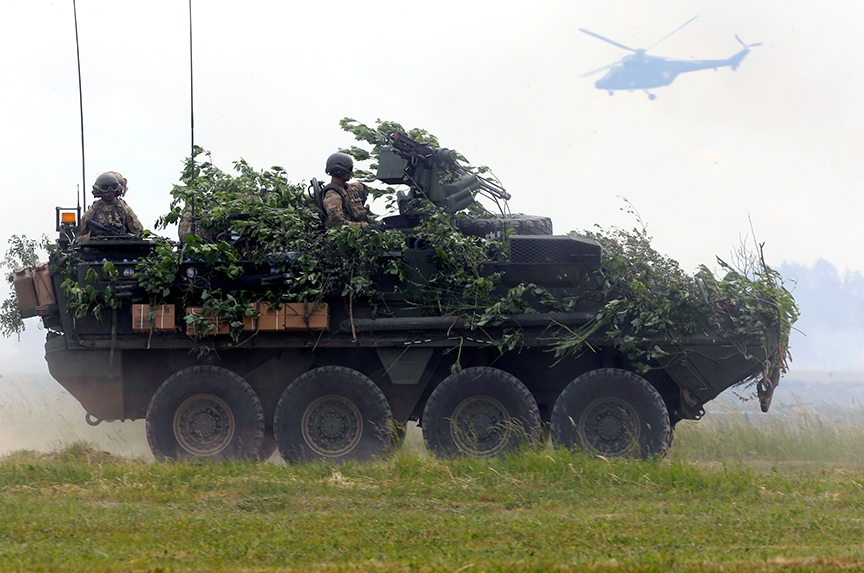 The Baltic States and Poland have long wanted an enduring NATO presence on their territories. Russia’s invasion and annexation of Crimea in 2014 convinced their allies they need it.  With plans approved at the Warsaw Summit in 2016, now the four countries each have a battle group of approximately 1,000 troops stationed on their territory. “We don’t see any imminent threat against any NATO ally,” NATO Secretary General Jens Stoltenberg said, “but we have to be vigilant.”

Stoltenberg traveled to Latvia and Lithuania in June during the Saber Strike 2017 military exercises, which involved some 11,000 troops from twenty countries, to mark the battle groups becoming fully operational and to remind everyone why they exist.

“What we saw in Crimea and Ukraine was that there was a lack of a strong military presence that made it possible for Russia to act in the way they did, with hybrid warfare, with little green men in Crimea,” Stoltenberg told me. “[Lithuania] is a very different country, but we need an increased NATO presence with multinational forces, improving our situational awareness to be able to send a very clear message that any attack, any threat against any NATO ally will trigger a response from the whole Alliance.”

Stoltenberg noted that the battle groups aren’t the only new element NATO has added to its beefed-up border protection, having tripled the size of the joint response force to 40,000 troops and including an upgraded spearhead force that can be deployed within days.

Part of Saber Strike’s goal this year was to practice defending the “Suwalki Gap,” the roughly sixty-five-mile border between Lithuania and Poland which also separates Russia’s Kaliningrad enclave from Belarus.  If that strip of land were blocked during a military conflict, it would sever the continuity of NATO territory and dramatically hinder allies’ movements.

No one’s saying the Kremlin has definite designs on the “Suwalki Gap,” or any other NATO territory, but Russia and Belarus are gearing up for their own joint exercises in September, Zapad, which are expected to simulate conflict with NATO. Details of Zapad 2017 have not been made public. Russian Defense Minister Sergei Shoigu has said Zapad will be smaller than Saber Strike’s roughly 11,000 troops, but some Western analysts believe Russia will actually call up as many as 100,000 military personnel. An exercise that large would require Moscow to officially notify the Organization for Security and Co-operation in Europe (OSCE) and OSCE members must be allowed to observe parts of the program, as Russia would have been welcomed at Saber Strike, had it wanted to attend.

Stoltenberg called on Moscow to follow those rules with Zapad 2017. “We expect Russia…,” he said before correcting himself, “we call on Russia to fully adhere to their international obligations. The increased presence of military personnel and forces across our borders just underlines the importance of more predictability, transparency, and mechanisms for risk reduction to avoid any incidents and accidents from happening.”
Regardless of what the Kremlin is considering, practice or otherwise, NATO’s not taking any chances, explained US Maj. Gen. Neal Loidolt, the Minnesota National Guardsman who directed Saber Strike. “As planners, we try to be prepared for any way that the next war is going to be waged,” he said, in response to my question about whether he really expects Russian tanks to come rolling across the Lithuanian border rather than some more sophisticated type of intrusion.

From traditional training to hybrid hoaxes

“You might say why are we still practicing mounted maneuvers with tanks and Bradleys [fighting vehicles]? Well, because the enemy still has its own versions of tanks and Bradleys. And they might very well still choose to use them against us,” he said. He also referred back to Crimea. “Perhaps it could be [like] both phases of the Ukraine operation,” he went on. “Perhaps it could be ‘little green men’ but perhaps it could be [like] the invasion into the Donbas region that could very well happen here.” Loidolt said Estonian colleagues told him they believe that is a realistic possibility in the Baltic region.

Loidolt mentioned that disinformation attacks have already been attempted against the German forces leading the Enhanced Forward Presence (eFP) battle group. Those efforts, widely attributed to Russia, have thus far failed.  Still, Loidolt acknowledged, that’s more likely to be the way a potential conflict would emerge.  “But what we don’t know,” he reminded, “is what happens if there’s a real tactical miscalculation and somebody does run a bomber into somebody else’s bomber or somebody crosses the border that they’re not supposed to? And you wouldn’t want to be an unprepared force practicing and training only for little green men and then being made to deal with a maneuver threat.”

Loidolt is confident NATO can handle anything that comes across the border, hoping that means nothing will.