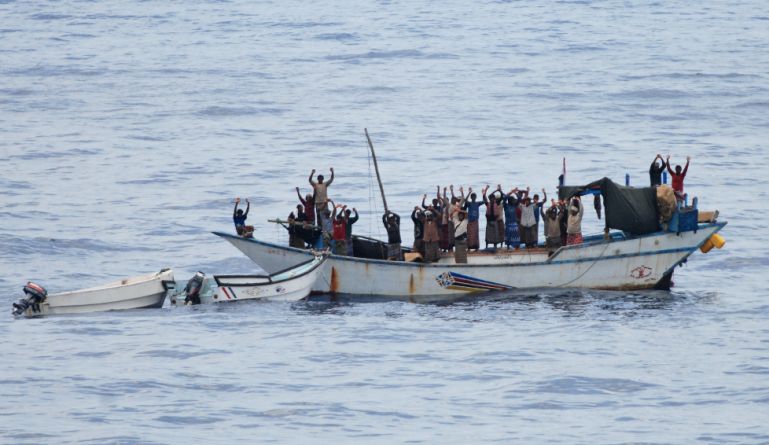 NATO forces thwarted two pirate attacks over the weekend. BBC reports that an attempted attack on a Norwegian tanker was “foiled by NATO warships and helicopters after an overnight pursuit in the Gulf of Aden.”  Dutch commandos also freed 20 Yemeni fishermen who had been taken hostage, Reuters reports.

In both cases, the pirates were briefly detained and then released because NATO has no “detainment policy.”

Lt. Cmdr. Alexandre Fernandes of NATO said the 20 Yemeni fishermen were rescued after a Dutch Navy frigate on a NATO patrol responded to an assault on a Greek-owned tanker. The tanker had been attacked by pirates firing assault rifles and grenades.

Commandos from the Dutch ship chased the pirates, who were on a small skiff, back to their mother ship, a hijacked Yemeni fishing dhow. “We have freed the hostages, we have freed the dhow and we have seized the weapons,” Commander Fernandes said, speaking on board the Portuguese warship Corte-Real. “The pirates did not fight, and no gunfire was exchanged.” The Corte-Real is also on a NATO antipiracy mission.

The same happened with the Norwegian tanker, which was freed by a Canadian warship: “The alliance said the pirates had been released because they could not be prosecuted under Canadian law.”

As attorneys David Rivkin and Lee Casey explained in a WSJ op-ed in November, international law is indeed murky on this issue.

One solution would be for the capturing state to press charges based on the much misunderstood and abused principle of “universal” jurisdiction. This is the notion that any state may criminalize and punish conduct that violates certain accepted international-law norms. Although its application in most circumstances is dubious — there is very little actual state practice supporting the right of one state to punish the nationals of a second for offenses against the citizens of a third — piracy is one area where a strong case for universal jurisdiction can be made (if only because piratical activities often take place on the high seas, beyond any state’s territorial jurisdiction).

The key problem is that America’s NATO allies have effectively abandoned the historical legal rules permitting irregular fighters to be tried in special military courts (or, in the case of pirates, admiralty courts) in favor of a straightforward criminal-justice model. Although piracy is certainly a criminal offense, treating it like bank robbery or an ordinary murder case presents certain problems for Western states.

To begin with, common criminals cannot be targeted with military force. There are other issues as well. Last April the British Foreign Office reportedly warned the Royal Navy not to detain pirates, since this might violate their “human rights” and could even lead to claims of asylum in Britain. Turning the captives over to Somali authorities is also problematic — since they might face the head- and hand-chopping rigors of Shariah law. Similar considerations have confounded U.S. government officials in their discussions of how to confront this new problem of an old terror at sea.

In the last few years, France determined to return its pirate prisoners to Somalia based on assurances of humanitarian treatment. The U.S. has, of course, rendered terror prisoners to foreign governments based on similar assurances, and only time will tell whether they are genuine. An equally important question is whether the transfer of captured pirates to local authorities will result in prosecution at all. In many areas, local governments may be subject to corruption or intimidation by strong pirate gangs.

At the same time, no one seriously questions the right of international navies to use lethal force against pirates, as both French and American forces have done in recent weeks.

Obviously, this is a situation that must be corrected.  Whether the solution is the International Criminal Court, trying pirates in a stable African country (Kenya is often mentioned), or something else, the current catch-and-release method is absurd.  Nor would we wish to institute a policy of summary execution for pirates.

Regardless, however, the successes by NATO forces in recent weeks is some welcome good news for an Alliance whose continued existence has been repeatedly challenged after six decades of service.  Certainly, out-of-area counterinsurgency operations like Afghanistan do not appear to be NATO’s future and the defense of Europe from attack is too modest a mission to sustain serious commitment from North America now that the threat is essentially nil.