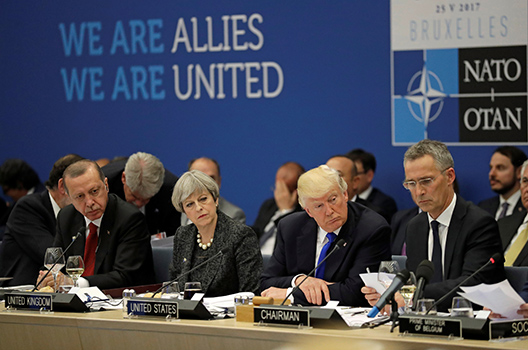 Adapt our Alliance Now and Together!

NATO is at a crucial decision point.  The Alliance has made significant progress since 2014 in strengthening deterrence against a revisionist Russia and countering threats from the south.  But continued questions about unequal sharing of burdens across the Atlantic threaten to erode the unity and common purpose that are the Alliance’s center of gravity.

It is political solidarity, now and in the future, that is the true defense against any and all adversaries. Only then will the Alliance be armed with the necessary strategic ambition needed to succeed in what is clearly going to be a challenging century for all of the Allies.  Such ambition will only be realized if it is embedded in a new, more balanced transatlantic relationship in which the United States continues to afford its European Allies with the defense guarantee and security support vital to Europe’s stability, in return for European Allies plus Canada, conscious of the pressing and changing needs of American and global security, becoming more able and willing to help meet those needs, as they did in the wake of 9/11.

The November 2017 GLOBSEC NATO Adaptation Report, The Future Tasks of the Adapted Alliance is clear: “To lay the basis for long-term adaptation, NATO leaders should commission a strategy review at the July 2018 Summit that could be completed by the seventieth anniversary summit in 2019, and which might be embodied in a new Strategic Concept. NATO needs a forward-looking strategy that sets out how NATO will meet the challenges of an unpredictable and fast-changing world”.

At this week’s NATO Brussels Summit you will collectively confirm and build upon the decisions taken at the 2014 Wales and 2016 Warsaw Summits, including a more robust command structure, enhanced readiness, mobility and reinforcement capacity, and a new training mission in Iraq as part of a wider counter-terrorism agenda. You will also reaffirm the Alliance’s long-term commitment to a Europe whole and free.

However, much more needs to be done — and quickly — if a 360-degree NATO is to be realized. An essential part of this is ensuring that NATO’s European members, plus Canada, are equipped to shoulder greater responsibility for transatlantic security as true partners for the United States.

As NATO nears its seventieth birthday, the Alliance risks falling behind the pace of political change and technological developments across the great drivers of mega-change, including new technologies like cyber and artificial intelligence, disinformation and other “hybrid” threats, as well as failing states, violent extremism and uncontrolled migration.  All allies need to take action to meet the pressing need for further organizational and internal reform to enable a properly agile and modernized Alliance and to better prepare NATO not only to meet the many technology and affordability challenges but to master them – from hybrid warfare to hyperwar.

Fifty years ago (December 1967) former Belgian Prime Minister Pierre Harmel delivered his seminal report to the North Atlantic Council on the Future Tasks of the Alliance. The report called for a new politico-military foundation to be established based on the equitable sharing of risk and cost, and the pursuit of a two-track strategy based on preservation of defense and deterrence on the one hand, and dialogue with Moscow on the other.

Harmel affirmed that NATO is and will always remain a defensive alliance. However, Alliance defense must be sound, credible, well-resourced and proportionate to the threats the Alliance faces. At the military-strategic level, collective security and collective defense are merging and growing in both scale and intensity. To meet that core challenge, NATO must be prepared, fit and able to act across the seven domains of grand conflict: air, sea, land, cyber, space, information and knowledge.

The Harmel Report was of its time but its guiding principles made the peace we enjoy today. That peace, however, can only be ensured and assured over the longer term if we confront the threats, both internal and external, that the transatlantic community faces today.  If NATO were to fail because of short-term political frictions, the loss would not only be felt by the Allies but by freedom-loving peoples the world over, as they could no longer rely on this anchor of legitimate security.

Therefore, what is needed and what our people are expecting from you, our leaders is the will to pursue and achieve a renewed high political consensus and a strengthened transatlantic covenant. Such a covenant must be based on shared values, solidarity and a clear purpose for our Alliance in this new and fast-evolving security environment.  As part of such a noble effort, the European Allies must properly commit to making a greater leap forward than hitherto for the sake of their own security and that of all the Allies on both sides of the Atlantic. Such ambition must be central to and inform the overarching goal of the new strategy review that we recommend be launched at the Summit.

Given the changing strategic context, the primary challenge and responsibility facing you all at the Summit will be to impart a renewed political purpose and momentum to the Alliance, in which all twenty-nine Allies commit to do their part.  Credible military capability and capacity is, of course, vital to meeting such challenges. That can only come if all Allies fulfil their commitments and share a common vision for the future of the world’s most important alliance.

Therefore, the undersigned urge the Heads of State and Government to commission at the Summit a Strategy Review that will guide Allies and NATO in the reforming spirit of Harmel, to adapt our Alliance to meet the challenges of the twenty-first century with confidence and purpose.

At the Brussels meeting, you will together have the opportunity to afford NATO’s citizens the strategic reassurance they need and crave from San Francisco to Vancouver, from Riga to Rome, from Amsterdam to Ankara. Seize that opportunity!

In wishing you every success at the Summit, we remain