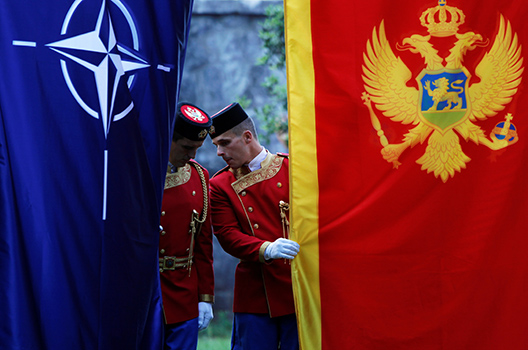 In his interview with US President Donald J. Trump, Tucker Carlson of Fox News asked why the United States should come to the defense of Montenegro, a tiny country in the Western Balkans with a population the size of Washington, D.C., that is a NATO ally.

It’s a perfectly reasonable question, with a good answer.

Montenegro is a proud nation with a proud people, who have proven strong and resilient throughout their difficult history. They will defend their nation and now our alliance. And we are all stronger – including the nations of the Balkans, including Americans – for having Montenegro in NATO.

Despite geopolitical pressures, Montenegro opted to anchor its future with the West. Its forces serve shoulder to shoulder with ours in Afghanistan. They have kept the peace in Liberia, Cyprus, and Somalia. As an ally, Montenegro aligns with the United States on tough issues whether sanctions against Russia, expelling a Russian diplomat after the Skripal case, or casting tough votes in the United Nations. Montenegro plays a stabilizing role in its region, getting along well with all of its neighbors.

We are proud to have Montenegro as an ally and we know our Alliance is stronger as a result.

A quarter century ago, the Western Balkans was a region defined by devastating war and brutal ethnic cleansing. The instability in that region threatened the wider European continent and spurred costly military action by NATO allies and the United States to stop the crisis. Today, thanks to the prospect of NATO and European Union membership, the region’s outlook has never been better.

Take for example the case of the Former Yugoslav Republic of Macedonia (FYROM), soon to be enshrined as the Republic of North Macedonia and the recipient of an invitation to start NATO accession talks just last week. After a nearly twenty-seven-year dispute over FYROM’s name, the Macedonian and Greek prime ministers reached an agreement in June that will normalize relations between the two countries and eliminate the risk of conflict between them as they become allies. The prospect of NATO membership and full integration into the Western community made this possible.

Just minutes after NATO’s invitation was announced, I interviewed Macedonian Prime Minister Zoran Zaev at NATO Engages, a conference co-hosted by the Atlantic Council on the sidelines of the NATO Summit in Brussels on July 11. He said that the negotiations with Greece were tough, but that his citizens “believe so much in our integration in NATO and in parallel in the European Union, that we will have a new friend, our southern neighbor.”

The prospect of NATO enlargement to Montenegro and other Western Balkan nations helped to prevent further conflict in this region and contributed to the peaceful transition to independence for Montenegro in 2006 and its recognition of the Republic of Kosovo in 2008. This is the biggest benefit the United States gets from bringing Montenegro into the family—the promise that the United States will never again have to intervene to stop a regional conflict in the Balkans. Given where the region was just two decades ago, this is a tremendous achievement.

NATO’s eastern enlargement is also key to containing potential Russian aggression in Eastern Europe. In the Western Balkans, the Kremlin has used political intimidation, economic coercion, and covert operations as a means to sow chaos, disrupt political and economic reforms, and prevent NATO and EU enlargement. In 2014, NATO foreign ministers discussed potential enlargement to Montenegro, but decided to punt on the decision due to Russia’s actions in Ukraine and a desire not to provoke Moscow further. This ambivalence, rather than preventing further Russian aggression, gave Russia an opportunity to pounce.

In October 2016, Russian GRU intelligence agents orchestrated an attempted coup in Montenegro to try to install an anti-NATO government. They planned to pose as Montenegrin security officers, open fire on opposition supporters, and assassinate the prime minister. Although the plot failed, it demonstrated Moscow’s ability to reach its hand into the Balkans when NATO wasn’t looking. Despite Russian efforts, Montenegro officially joined NATO as the Alliance’s twenty-ninth member on June 5, 2017.

Russia’s actions were in part the result of ambivalence towards enlargement. Without clear signals about future NATO membership for Montenegro, Russia felt emboldened to strike while it had the chance. NATO enlargement is eliminating any perceived security vacuum and offers the prospect of a secure future for the entire region.

If NATO should stop the promise of further enlargement, it runs the risk of leaving countries in the region susceptible to Moscow’s intimidation tactics. We have seen too many times the dangers of great power competition in the Balkans, and it must not be repeated again.

NATO membership brings a guarantee of peace, not just for its new members, but for the entire Western community. Internal conflicts in the Western Balkans triggered a World War at the beginning of the twentieth century and a devastating conflict in the century’s last decade, both of which cost the United States and its allies an enormous amount of money and lives. Rather than starting World War III, membership for NATO prevents that exact possibility and moves us closer to the goal of a peaceful European continent.

Image: Montenegrin guard of honor inspect NATO and Montenegro flags prior to a ceremony to mark the accession to NATO of Montenegro in Podgorica, Montenegro, June 7, 2017. (REUTERS/Stevo Vasiljevic)