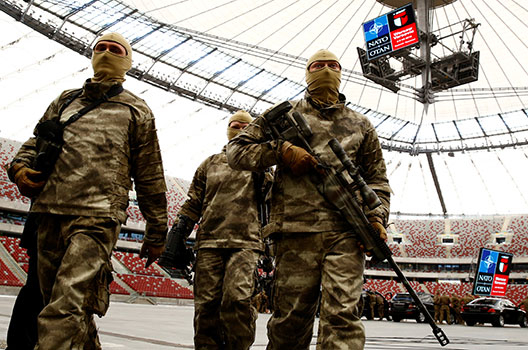 As its summit in Warsaw approaches, NATO is bolstering defenses on its eastern flank, increasing military presence, improving infrastructure, and conducting military exercises. While praised in some circles, NATO’s actions have also drawn criticism. German Foreign Minister Frank-Walter Steinmeier has accused the Alliance of “warmongering” and ratcheting up tensions with Russia. Russian President Vladimir Putin has characterized NATO’s actions as aggressive, hostile, and “Cold War-style.”

Nevertheless, the Alliance’s concerns are rooted in fact. As Russia stokes tensions near NATO’s eastern border, the Alliance must respond in a measured way to project strength, stability, and solidarity—especially if the United Kingdom acts on the decision of a majority of Britons to take the UK out of the European Union. While enhanced forward presence may not be the sole aspect of an approach that responds to Russia, it is certainly a vital one.

NATO has taken significant steps to boost its military presence in the east amid concerns about Russian provocations. In early June, as part of Anakonda-16, an estimated 31,000 Polish, US, and other alliance troops participated in a series of comprehensive exercises designed to test NATO’s ability to respond to attacks in Poland and the Baltic States. In the Baltic Sea and throughout Estonia, Finland, Germany, Poland, and Sweden, seventeen NATO members and partners have conducted maritime drills as part of the Baltic Operations exercise (BALTOPS).

To hedge against the threat of a Russian incursion in the Baltics—however unlikely—NATO announced on June 13 that it would deploy four multinational battalions to Poland and the Baltic States. The United States will also add a rotating armored brigade in Eastern Europe under the auspices of the US European Reassurance Initiative (ERI).

The Visegrad Four (the Czech Republic, Hungary, Slovakia, and Poland) have announced plans to station a company-sized military unit in the Baltic States as part of NATO’s broader reassurance measures in light of Russia’s annexation of Crimea and its continued support for separatists in eastern Ukraine.

In a demonstration of Russian President Vladimir Putin’s escalatory aims, Moscow has vowed to deploy three divisions—consisting of an estimated 15,000 soldiers each—to counter NATO’s four battalions, each with an approximate 1,000 soldiers.

NATO must adapt to a new security environment in Eastern Europe.

Although Steinmeier warned against “inflaming the situation through saber-rattling” and “stomping boots,” NATO cannot afford to be a gummy bear in the eyes of the Russian bear.

The cost of Russian action in the Baltics would be colossal, especially compared with the relatively low costs for NATO to deter such a possibility. The likelihood of Russia orchestrating a conventional attack, a limited land grab or incursion below the threshold of triggering NATO’s Article 5 defense clause, is low, but not low enough to ignore. A proactive NATO, with stronger, albeit politically challenging, deterrence measures, could prevent divisions in an alliance that would struggle to react to an attack.

Despite Moscow’s disapproval of a stronger NATO military posture in Eastern Europe, NATO’s new deployments will be defensive forces and would not pose a substantial threat to Russia’s security.

As NATO Secretary General Jens Stoltenberg said: “what [NATO] does is defensive, it is proportionate, and it is fully in line with our international obligations. NATO is a defensive alliance, and our four battalions do not have any offensive capabilities, but they are there to send the signal that we stand united in NATO.”

While some Alliance leaders, including Steinmeier, lament that NATO is not doing enough to foster dialogue and cooperation with Russia, Stoltenberg has stressed that NATO does not seek a confrontation with Russia and has made it a priority to develop mechanisms for transparency, communication, cooperation, and risk reduction through such forums as the NATO-Russia Council.

But Russia has made it clear that it does not want to accept NATO’s hand in partnership, and productive dialogue will be impossible without adequate deterrence. NATO will only succeed diplomatically with Russia if it has a strong strategic position. This makes bolstering defenses in the Baltic States and Poland a priority. NATO must quite literally stick to its guns on its eastern flank.

Russia has tripled its defense spending over the past fifteen years, drastically modernized its military capabilities and used provocative stunts to showcase them, and used military force to annex Crimea and spark conflict in eastern Ukraine.

Ultimately, NATO must respond to these aggressive actions with prudent steps to bolster its defensive and deterrent capabilities to assure its allies that it will defend them against possible threats. In the wake of the vote for Brexit, where European unity is now being called into question to the benefit of Putin’s divisive aims, NATO must develop a collective, coherent, and nuanced approach toward Russia at its Warsaw Summit in July.

Lauren Speranza is a program assistant in the Transatlantic Security Initiative of the Atlantic Council’s Brent Scowcroft Center on International Security.

Image: Soldiers participate in a military police exercise, ahead of the upcoming NATO summit in July in Warsaw, at the PGE National Stadium in Warsaw, Poland. May 24, 2016 (REUTERS/Kacper Pempel)