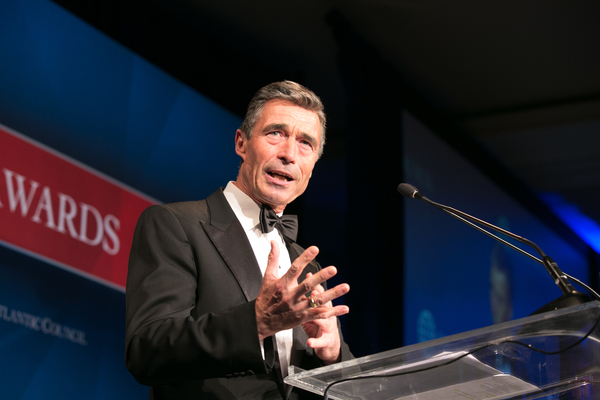 NATO Secretary General Anders Fogh Rasmussen declared Europe and North America “need to strike a new transatlantic deal” based on “people, science, and culture” in order to “make our community of values stronger, wider, and deeper.”

While Rasmussen renewed his longstanding concerns about “a growing imbalance in the security contributions made by America and Europe” and urging that “European nations need to do more, and to do better,” he emphasized that “NATO is not just a military Alliance.”

So, while “to remain America’s partner of choice, Europe’s choice must be to become the strong partner that America needs,” that partnership must expend beyond collective defense. The secretary general reminded the audience that “The Washington Treaty also commits all Allies to strengthening their free institutions.  Promoting conditions of stability and well-being.  And encouraging economic collaboration.”

In short, Rasmussen explained, “NATO was formed to defend our freedoms. Personal freedom. Political freedom.  And economic freedom.  These values are more powerful than any military might.”

He declared that his “long-term vision is of a transatlantic common market” and that “I welcome the launch of talks on a Transatlantic Trade and Investment Partnership. This will stimulate jobs, innovation, growth.  And in a world where not all play by the same rules, it will ensure that we continue to set global standards.”

But, he insisted, “my vision goes beyond trade deals.  It’s about people, science, culture.”

He noted that coming to America as a young man shaped his own worldview and “strengthened my personal bonds with families, colleagues and institutions across this great country.” All three of his children followed his footsteps, participating in exchange programs as students. His son, Henrik, is “actually married to an American and settled here in the States.  And my wife and I are proud to be grandparents to Danish and American children.” Naturally, then, he supports “strong exchange programs” which he believes “are the best way to keep us connected.”

Rasmussen urged that “we must deepen our  security cooperation across the Atlantic” which he believes “is the foundation for everything we have.” Additionally, though, NATO must “continue to work with the wider  world” who share our values and interests.

In words that are music to the ears of an Atlantic Council audience, the secretary general declared that, “We may be divided by geography, but we share the same values and face the same challenges: cyber attacks, terrorism, missile proliferation, piracy.  And no country, and no continent, can deal with such challenges on its own.”  He added, “The transatlantic relationship is vital for the freedom, security and prosperity of Europe and North America. And it provides the bedrock of the rules-based global order.”