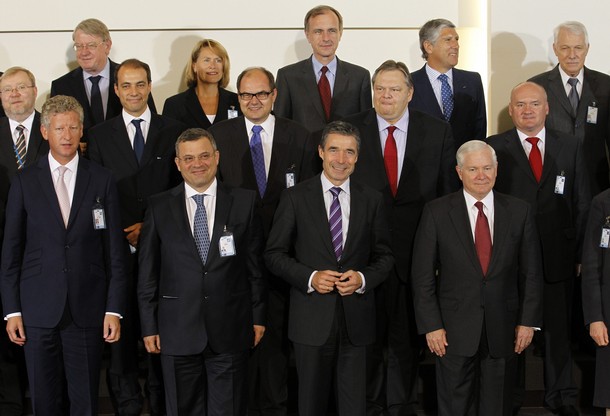 From the International Herald Tribune, June 23, 2011: Has the Atlantic alliance outlived its usefulness? The British journalist and writer Geoffrey Wheatcroft raised that question in an opinion article (“Who needs NATO?,” June 16) that drew a strong reaction from Ivo H. Daalder, the U.S. permanent representative to NATO, who argued that the alliance is more needed than ever (Counterpoint, June 18-19). Sarwar Kashmeri, a senior fellow in the Atlantic Council’s International Security Program and the author of “NATO 2.0: Reboot or Delete?,” joins the debate.

In Ambassador Ivo Daalder’s surreal world of NATO “more than 150,000 troops participate in six NATO operations on three continents”; in Afghanistan, “a NATO-led force made up of troops from 48 nations is helping to build security”; in Libya, “17 allies and partner nations have taken on the new responsibility of helping the Libyan people determine their own destiny”; and NATO “continues its long-standing commitment to stabilize the Balkans.”

The reality, of course, is very different.

In the real world, the war in Afghanistan isn’t NATO-led; it is led by the United States, which would never let its forces in Afghanistan be run by NATO. That would be a disaster. Just look at the NATO-led war in Libya in which only six out of the 28 NATO countries are participating, and only three of those actually attack Libyan targets to enforce the United Nations’ mandate.

In the real world, after a mere 11 weeks of conflict against Libya, the “mightiest alliance in the world” has run out of munitions, does not have enough aircraft to conduct its missions, and seems unable to prevail against a minor military power.

As for the Balkans, after more than 20 years of operations, NATO has still not succeeded in stabilizing it.

Not surprisingly, most of America’s next generation of military leaders has lost confidence in NATO. At a recent talk I gave at an elite U.S. military institution, just five participants out of an audience of some 60 raised their hands when asked how many believed NATO ought to continue in business.

An American colonel, recently returned from Afghanistan, told me that when he asked an officer from a European NATO member country to lead a supply convoy one evening, the officer explained that he was only paid to work for a set number of hours and his working day was done. Reminded that there was a war in progress, the officer said, “Maybe your country is at war, but not mine.”

European lack of support for the wars in Afghanistan and Libya has nothing to do with the bravery of Europeans soldiers or their fighting skills. Europeans simply do not feel as threatened as Americans do, and are not interested in using their tax dollars to fight in distant lands.

This European/American schism within NATO is further aggravated by a split between Central and Eastern European members on one side, and Western ones on the other. The former continue to regard Russia as a threat, the latter do not. If this NATO is “an essential source of stability in an unpredictable world,” heaven help us all.

One more point: NATO’s disarray has begun to chip away at the wider European-American relationship currently contributing 14 million jobs and $3 trillion in commercial sales. American officials regularly berate the Europeans with calls to spend ever more money on defense, even when the European Union’s total defense budget is already $300 billion, pretty close to America’s defense budget prior to 9/11.

The real problem is the way in which this money is spent — for example, the wasteful duplication of weapons procurement programs. This will not change unless there is political will among E.U. leaders for change.

After speaking with over 50 military and political leaders on both sides of the Atlantic, I am convinced this will to change will only come about when America decides to take away its defense credit card and asks Europe to take responsibility for its own security.

The E.U. is increasingly capable of defending itself under its Common Security and Defense Policy, through which the E.U. has already deployed 27 military and civilian missions from Asia to Africa, and just approved the 28th — a military force for Libya that is ready to be deployed as soon as the U.N. asks for it.

C.S.D.P. should be the pre-eminent vehicle to defend Europe;NATO should be bridged to C.S.D.P. and only come into action when Europe, America, and Canada wish to act together in conflicts where all three share vital national interests.

NATO has truly done a magnificent job, but it is time to move on.

Sarwar Kashmeri is a senior fellow in the Atlantic Council’s International Security Program and the author of “NATO 2.0: Reboot or Delete?" This essay originally appeared in the International Herald Tribune.