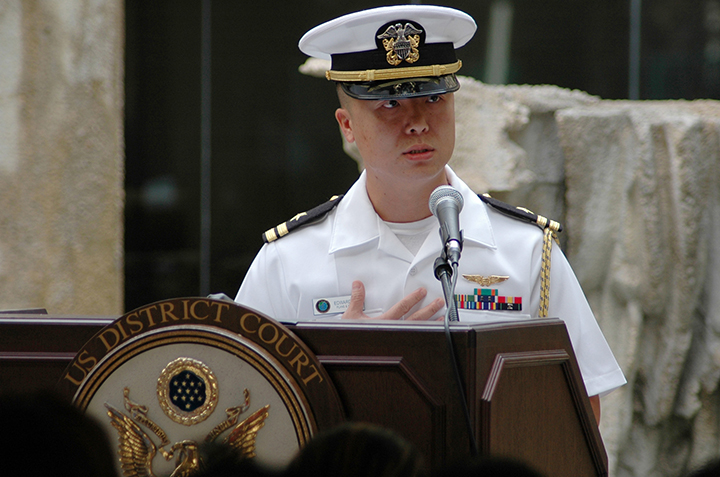 US Navy Flight Officer may have jeopardized intelligence gathering capabilities

News trickled out this weekend about a US Navy Officer charged with espionage who may have jeopardized significant intelligence collection capabilities and sensitive operations because of the access he had to patrol and reconnaissance aircraft.

The Officer, who has been identified (although not officially confirmed by the Navy) as Lt. Cmdr. Edward C. Lin, is accused of multiple counts of passing and attempting to pass secret information to a foreign government, reportedly China.

Lin had assignments with a Fleet Air Reconnaissance Squadron, which flies the EP-3E Aires II signals intelligence collection aircraft, and a Special Projects Squadron. China may have an abiding special interest in EP-3E collection operations and capabilities going back to the April 2001 mid-air collision between an EP-3E and a Chinese J-811 interceptor fighter jet. The Chinese pilot was killed in the collision and the EP-3E was forced to land on Hainan Island. Chinese authorities detained the crew of the EP-3E and blamed the United States for the incident. Adm. Dennis C. Blair, the commander in chief of the United States Pacific Command at the time, accused the Chinese plane of tailing the US jet.

Details of the charges against Lin are scant, based heavily on the three-page, heavily-redacted charging documents acquired by US Naval Institute News. According to those charge sheets, he is accused of multiple counts of passing and attempting to pass secret information to a foreign government, which is reported to be China.

Espionage is always a matter of grave concern. By definition “secret” information is that which by its disclosure could cause serious damage to national security. The specifics of the information Lin is accused of compromising will probably remain protected, though, even throughout court-martial proceedings.

The espionage, however, highlights critical strategic issues. The US Navy finds itself in a strategic environment facing competition against not one but two major powers—Russia and China. Both countries have taken advantage of a dwindling gap in US technological superiority to create areas of “Anti-Access/Area Denial” (A2AD). Both countries have deployed an array of surface-to-air and anti-ship missiles, and the associated radars and command and control, from the Western Pacific to the Baltic and Barents Seas. Their operational objective is to keep US and allied forces at a distance and stop the United States and its allies from waging war in a manner we have displayed from Operation Desert Storm in 1991, to Operation Odyssey Dawn/Unified Protector in Libya in 2011, to Operation Inherent Resolve against the Islamic State of Iraq and al-Sham (ISIS) in Iraq and Syria.

Attempting to gain sea control, operational access, and entry to A2AD air- and waterspace relies on advantages in information, targeting and decision timelines. In 2009, Chief of Naval Operations Adm. Gary Roughead committed to making information a main battery of the US Navy. The signals intelligence from EP-3E and similar collection platforms is foundational to how the US Navy and joint force will fight in an A2AD environment. The cat-and-mouse game of acquiring precise intelligence on A2AD defenses, while remaining undetected in our maneuver space at sea, is a critical strategic aspect of the modern and future battleground. Disclosure of the secrets of our reconnaissance sensors may tip that balance against the US Navy in a future fight.

Even while discussing information warfare and including cyber and electromagnetic domains in all-domain access, it is interesting to note that what Lin is accused of is good old-fashioned espionage. Rather than cyber espionage or computer network exploitation, which frequently appear in the press and popular culture these days, this was old-school human intelligence, exploiting human weaknesses as in Navy espionage cases of decades ago like John Walker—a US Navy Chief Warrant Officer who was convicted of spying for the Soviet Union—and Jonathan Pollard—an intelligence analyst with the Navy who was convicted of spying for Israel.

Mentioning those past espionage cases still evokes a quick, emotional response in Navy circles. Only time will tell if the Lin case will one day do the same. Given the accused’s access to front-line intelligence collection capabilities and operations, plus the involvement of China, our rival in the Pacific Century, the present espionage case has every chance to reach that level of notoriety and cause a similar degree of damage to the United States and national security.

Capt. Steven Horrell is an active duty US Navy officer and is the current US Navy Senior Fellow at the Atlantic Council. The opinions expressed are the author’s own, and do not necessarily reflect the views of the Department of Defense or the Department of the Navy.

Image: US Navy Lt. Edward Lin, a native of Taiwan, speaks about his path to US citizenship at a naturalization ceremony in Honolulu, Hawaii, in this US Navy handout photo taken December 3, 2008. Lin, a US Navy officer with access to sensitive US intelligence, faces espionage charges over accusations he passed state secrets, possibly to China and Taiwan, a US official told Reuters on April 10. (Reuters/US Navy/Mass Communication Specialist 1st Class Sarah Murphy)