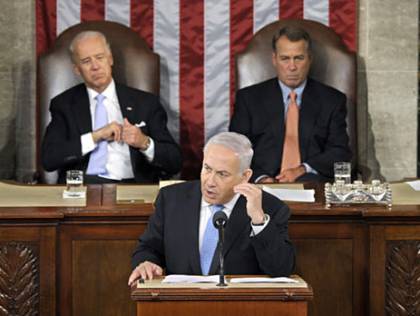 When a joint session of the U.S. Congress gave Israeli Prime Minister Binyamin Netanyahu 29 standing ovations — four more than U.S. President Barack Obama received for his last State of the Union message — there was little doubt that Israel is an integral part of the American body politic. It was a hard-line speech by an Israeli on the right of the Israeli spectrum that firmly rejected Obama’s proposal for Middle East peace: The pre-1967 war frontier with minor land swaps for both sides.

It was also a demonstration of why the United States cannot continue to pose as a "valid interlocutor" between Israelis and Palestinians. And why former U.S. Sen. George Mitchell, D-Maine, quit as Obama’s peace negotiator after two years of long-distance commuting between the Mideast and the United States.

Former six-term U.S. Rep. Cynthia McKinney, D-Ga., but more recently a Green Party candidate, told Iran’s "Press TV" she was required to sign, "as were all members of Congress, pledges of support for the military superiority of Israel and for Jerusalem as the capital of Israel." She also claimed her final term in Congress came to an end after the American Israel Public Affairs Committee "funneled money into the campaign of her Democratic Party primary opponent, Hank Johnson.

McKinney’s interview to Press TV came on the eve of the annual AIPAC Policy Conference in Washington May 22. It was widely published over the Arab world.

AIPAC, with 100,000 members, is arguably the most powerful lobby in Washington and doesn’t have to register as a foreign agent.

The joke on Capitol Hill is that Israel doesn’t have to lobby because it’s the 51st state. Which Arab governments assume anyway.

With the new merger of the Palestinian authority and Hamas, dedicated to the destruction of Israel, along with civil wars in Libya, Syria and Yemen, as well as the growing influence of the Muslim Brotherhood in Egypt, the "Arab Spring" didn’t even last till summer. Reasons enough for Netanyahu to conclude Israel has at least two more years to continue consolidating Israeli settlements in the West Bank and East Jerusalem.

Complacency didn’t last long. The Syrian dictatorship, after killing more than 1,000 of its own people in countrywide anti-regime, pro-democracy demonstrations, organized Palestinian refugees to mark the 44th anniversary of the Arab defeat in the Six Day War by "peacefully" penetrating Israeli defenses on the Golan Heights. Several hundred showed up and ignored Israeli warnings to back off.

Israeli gunfire killed 22, wounded 350. This was clearly a Syrian attempt to detract world attention from its 8-week-long, bloody repression of anti-regime demonstrations. Foreign reporters were kept out but Twitter messages and cellphone news coverage kept the story center stage.

In the West Bank, Palestinians marked the 1967 war’s Nakba Day ("catastrophic setback") by demonstrating up and down the separation wall; dozens were injured.

And Netanyahu faced an ugly low upon his return from a U.S. high.

The man who ran Israel’s formidable Mossad for eight years is criticizing Netanyahu for ignoring the 2002 Saudi Arabia peace plan — to which all 22 Arab governments subscribed. Israel was to withdraw to the pre-1967 war frontier with minor rectifications on either side. And all Arab governments agreed that in return they would recognize Israel diplomatically and commercially.

This, essentially, was the plan that Obama dusted off and Netanyahu shelved.

But ex-Mossad chief Meir Dagan is a dagger in Netanyahu’s body politic. And Dagan isn’t alone. Several former intelligence chiefs are lined up with Dagan. They also know first-hand how anxious Netanyahu is to detract from Palestinian pressure for their own state in the West Bank and Gaza — by bombing Iran’s nuclear installations.

As Dagan put it, "This would mean regional war and in that case you would give Iran the best possible reason to continue its nuclear program."

And the regional challenge that Israel would then face, said the spy chief, "would be impossible." He and his intel colleagues know that Iran has formidable asymmetrical retaliatory capabilities — from Bahrain, homeport for the U.S. Navy’s 5th Fleet, with a local population that is two-thirds Shiite, many of them pro-Iran, to the Hormuz Strait, Qatari and Saudi oil terminals, and Hezbollah and Hamas rockets and missiles.

Dagan, Yuval Diskin, head of Shin Bet, the internal security agency, and Gen. Gabi Ashkenazi, the military chief of staff, all stepped down this year, And Dugan made clear he and his retiring colleagues served as a brake on the gung-ho Bibi Netanyahu and Defense Minister Ehud Barak.

According to Israeli media reports, a week before retiring, Dagan tried to send a message to the Israeli public to warn about Netanyahu’s plans for an attack on Iran. But military censorship blocked any reporting of Dagan’s views. He was no sooner officially retired than he evaded the censors.

Haaretz front-paged a commentary by Ari Shavit that said, "It’s not the Iranians nor the Palestinians who are keeping Dagan awake at night, but Israel’s leadership."

Dagan appeared on stage at Tel Aviv University last week, where he told Shavit he is deeply worried about the next turn of the Palestinian wheel at the U.N. General Assembly in New York next September. This is when the Palestinians will request recognition of a Palestinian state with its pre-1967 war borders.

The vote is expected to be unanimous — other than two dissenters: The United States and Israel.

This is when Dagan expects Netanyahu to attack Iran. By going public now, he hopes to put the kibosh on the well-rehearsed plan.

Dagan is no wooly-headed liberal, reported The New York Times. He was first appointed by super hawk Ariel Sharon. He served under three prime ministers and was reappointed twice.

He is credited with major intel operations that destroyed a Syrian nuclear reactor in 2007 and organized the successful assassination of key Hezbollah operatives who were planning to kill Israelis.

Dagan detractors — and there are many in the ranks of the governing coalition — accuse him of grandstanding as he prepares a political debut. But by law, after serving as a top spy chief, he has to wait three years before entering the political arena.