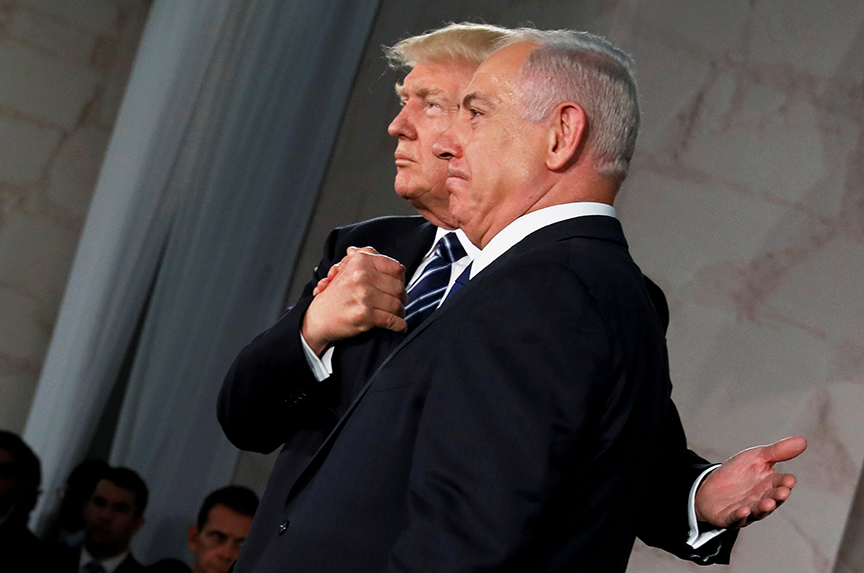 Israel’s prime minister, Benjamin Netanyahu, is visiting Washington this week. The nation’s capital — engrossed fully in the ramifications of the just-released Mueller report — may have little available bandwidth to invest in Netanyahu’s mission, but he shouldn’t be expected to mind: the prime minister’s most important audience this time around is not in the United States, but in Israel.

Israelis will be going to the polls on April 9 and Netanyahu is fighting for his political life. The campaign has been brutal. There has been markedly limited discussion of substantive policy issues, with an inordinate amount of attention being focused instead on the character of those vying for leadership.

The ballot is shaping up, for all intents and purposes, as a referendum on Netanyahu. The prime minister (who will have been in the job for a full decade by election day) is running on his performance record which — even his most bitter opponents have conceded — has included more than a few security, diplomatic, and economic feats. His challengers are countering that it’s time for Netanyahu, his successes notwithstanding, to be removed from office; his involvement in myriad corruption investigations and frequent attacks on Israel’s democratic institutions have featured prominently in this calculus.

Netanyahu’s arrival in the United States comes now — and not coincidentally — at precisely the moment when he needs to seize the agenda and pivot to his strengths. The prime minister will be feted by US President Donald J. Trump at the White House on March 25 and 26 and address an adoring crowd of thousands at the annual AIPAC policy conference. (Hecklers are certain to be silenced swiftly.) Washington thus provides the ideal backdrop for Netanyahu to flaunt his credentials as Israel’s top statesman, and highlight the political inexperience of his main rival, former IDF chief-of-staff Benny Gantz.

The events of the coming few days will transpire against the backdrop of last week’s presidential tweet asserting that the time has come for the United States to “fully recognize Israel’s sovereignty over the Golan Heights.” While true that Netanyahu and his allies have lobbied energetically — particularly since the advent of the civil war in Syria — for American acceptance of Israel’s claim to the Golan, the timing is perceived widely as a not-so-subtle attempt to improve Netanyahu’s electoral fortunes.

Like with his earlier decision to move the US Embassy to Jerusalem, Trump has taken a step whose significance is mostly symbolic. It will have very little practical effect on the lives of Israelis, but merely confirm a reality of their existence — i.e., Israeli control over this strategic high ground since 1967. It’s unlikely that other world powers will hasten to follow in Trump’s footsteps. If anything, the move has sparked a backlash of protest from international actors, most of whom harbor no illusions about Israel withdrawing from the Golan at any time in the foreseeable future.

Trump’s new stance on the Golan also comes at a most inopportune time for the United States itself, with the administration engaged in final preparations to release its much-touted blueprint for Middle East peace. The plan — doubtful already to gain much traction among the parties — will now encounter certainly the staunch opposition of tentative Arab partners, indignant over this latest unilateral gesture to Israel.

These factors give credence to the charge that Trump’s motivations in this regard are more personal and self-serving. Speaking with Fox Business, the president asserted that “other presidents have campaigned, they said they’d do it” — ending with his familiar refrain that “no president has done it,” suggesting thereby that he was driven at least partially by the impulse to outshine his predecessors. His claim, when asked in the same interview about the impact of his pronouncement on Netanyahu’s re-election bid, that “I wouldn’t even know about that” rings as disingenuous given his proud display on Instagram of a Likud banner portraying the two leaders shaking hands.

Cut from the same political cloth, Trump and Netanyahu have forged a symbiotic alliance. Trump’s benevolence toward Israel — attributed singularly to Netanyahu’s success in cultivating his friendship — buoys the prime minister’s prospects. And when he responds gratefully by heaping praise on Trump, Netanyahu bolsters the president’s standing among his core Republican and evangelical supporters.

This feedback loop will be in evidence undoubtedly when Trump and Netanyahu appear together in the Oval Office this week. For the prime minister — who made a highly irregular pitstop on the way to the airport on March 23, crashing the nightly news to defend himself against new allegations — the opportunity to escape the grueling routine of life on the trail and to sparkle on the world stage is exactly what his pollsters ordered.