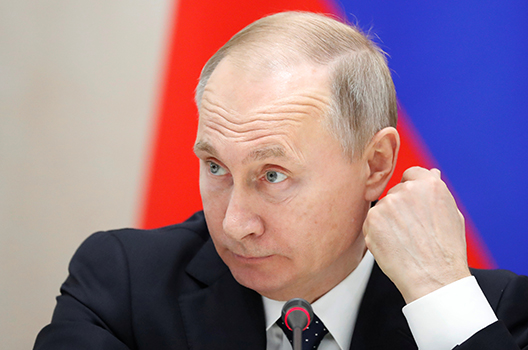 Driven by understandable distrust of US President Donald Trump’s continued relationship with Russian President Vladimir Putin, a bipartisan group of US senators have introduced legislation that, if passed, compels the Trump administration to increase the pressure on Moscow. The Defending American Security from Kremlin Aggression Act of 2019, or DASKAA, is a revisited, and improved version of the similarly named bill that was introduced in response to Trump’s widely panned July 2018 summit with Putin in Helsinki. Several additional Russian-related outrages later, this bill introduced by Senators Graham, Menendez, Cardin, Gardner, and Shaheen likely has a better chance of becoming law than its predecessor, which languished in a Congress distracted by a Supreme Court fight, the summer recess, a competing Russia sanctions bill, and the pre-election environment.

This updated DASKAA is a nuanced and thoughtful law that clearly reflects the efforts its authors undertook to address issues with the initial draft. It contains several provisions that will have a serious impact on Moscow, provide deterrence in other key areas, and has removed some of the sanctions previously considered by the prior Congress that caused serious alarm among European allies and those concerned with sanctions blowback to the global economy. It also addresses a number of other bipartisan policy priorities to entice members who may otherwise be on the fence regarding additional Russia sanctions legislation.

The legislation contains a number of sanctions that are divided between (1) those related to Russia’s interference in democratic processes and elections, and (2) those related to Russia’s ongoing aggression against Ukraine. Linking the sanctions to specified policy issues provides a useful roadmap for lifting such sanctions should Moscow finally decide to cease its aggressive behavior. It is crucial to note, however, that the cumbersome congressional review provision in Section 216 of the Countering America’s Adversaries Through Sanctions Act of 2017 (CAATSA) will apply to any lifting of sanctions imposed by DASKAA 2.0.

Although the legislation divides the sanctions topically, this analysis considers (1) those sanctions that are mandatory within a prescribed period of time after DASKAA becomes law irrespective of further provocations, and (2) those that require a determination by the administration of specified bad behavior prior to being imposed. Specifically, the bill requires the Trump administration to impose the following prohibitions in reaction to Kremlin aggression already committed:

The other sanctions provisions require the administration to make a determination before imposing sanctions related to future Kremlin aggression in specified areas of concern, ranging from Russian destabilization of Ukraine to attempts to undermine democratic institutions. They include:

That’s an exhaustive list of the included sanctions, but the bill also contains a number of other provisions that advance bipartisan priorities with regard to Russia and US foreign policy in general. Most notably among them, a mandated congressional vote on any decision by a president to leave NATO, a report on Putin’s personal wealth that is sure to be an annoyance for the Russian leader for whom corruption is a domestic political weakness, an expansion of transparency requirements on high-value real estate purchases, and funding for the reestablishment of the State Department’s office of the sanctions coordinator, which was terminated in the early days of the Trump administration. The bill also reiterates Congress’s prioritization of the bilateral relationship with the European Union – a perspective the Trump administration has repeatedly been at odds with – though there are a couple sanctions provisions we mentioned above that may test that relationship.

This bill seems far more likely to become law than the previous version given these sanctions improvements, the broad array of bipartisan priorities it advances, and ample congressional angst over the administration’s Russia policy. There remains great anger within Congress over the Trump administration’s inadequate response to Russia’s 2016 and 2018 election interference, Russia’s Kerch Strait aggression and the continued detention of twenty-four Ukrainian sailors, the lack of timely implementation of the 1991 Chemical and Biological Weapons Act in response to the Skripal assassination attempt in Salisbury, and the recent delisting of international aluminum giant Rusal (despite our belief that the decision was appropriate). Members on both sides of the aisle also continue to view the administration as not having fully implemented CAATSA.

The revised DASKAA legislation does have weaknesses, including an overabundance of reports that will chew up administration resources better utilized elsewhere on implementation and an inane section requiring a determination on Russia as a state sponsor of terrorism. We continue to believe that the congressional review in Section 216 of CAATSA has significant pitfalls and that the professionals at the Treasury Department’s Office of Foreign Assets Control (OFAC) should be given deference on administrative sanctions implementation matters. Finally, DASKAA sets up several menu-based sanctions that are secondary sanctions constructs, but without explicit primary prohibitions. While those prohibitions are implied by the menu, Congress should make the primary sanctions prohibitions clear in the bill, as many sanctions in the menu format are not applicable to US persons (a visa ban for corporate officers, for example).

There are also likely to be unanticipated consequences of these sanctions to EU, Japanese, and other US partners that Congress should try to resolve prior to passing the legislation, while also ensuring sufficient flexibility is afforded the implementing agencies to respond reasonably when those governments raise them.

There are a couple key indicators that may foreshadow whether DASKAA 2.0 eventually will become law. First, press reporting suggests that new sanctions against Russia, coordinated with the EU, may be coming soon. While some Trump allies in Congress may point to such actions as sufficient, anything falling short of broader congressional expectations will only accelerate a push for new sanctions by the legislature. Second, while it’s hard to see the Democrat-controlled House saying no to new Russia sanctions, if Senate Majority Leader Mitch McConnell is able to stonewall DASKAA 2.0, this bill may never come to a vote.

Whatever happens in the near term, Putin’s track records suggest that he is likely to continue testing US resolve with another international event sooner rather than later; he just cannot seem to help himself. This bill, at the very least, will serve as the blueprint for any congressional reaction to new Russian aggression in that eventuality. It will be fascinating to see if conditions are ripe for it to move faster.