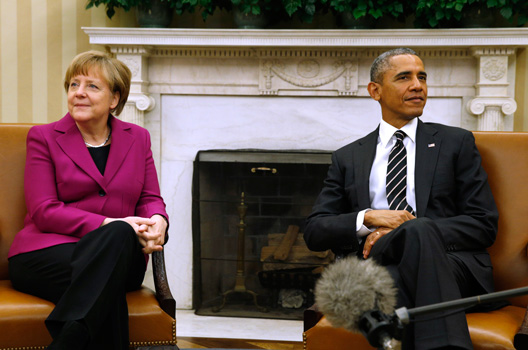 More than twenty-five years after the end of the Cold War, the United States and Germany remain close political and economic allies. However, personal ties between the two allies have diminished. In Germany, favorable opinions of the United States are at an all-time low. On the other side of the Atlantic, the United States is focusing more on Asia and criticizes Europe—and especially Germany—for not stepping up to its leadership role on pressing policy issues from the European Union’s economic crisis to EU-Russian relations. While Washington and Berlin will never agree on all policy issues, several US and German policy objectives could be aligned, providing a basis for increased cooperation. This would allow the two allies to renew personal ties and develop a mutual understanding of each other’s internal policy goals and constraints—strengthening the US-German relationship in the process.

One of the world’s most urgent issues is how to mitigate climate change. Germany’s Energiewende [energy transition] is an unprecedented attempt to transform the national energy system by increasing renewables and phasing out nuclear power. Additionally, the EU has developed an emissions trading scheme (EU ETS), which places a cap on overall carbon emissions and lets companies trade allowances for CO2 emissions. This cap-and-trade program aims to limit CO2 emissions overall.

Germans often accuse the United States of preventing meaningful progress on this issue, pointing to Washington’s refusal to sign the Kyoto Protocol and continued internal US debate on climate change. However, the United States has made significant strides at the local and state level. Many states have implemented a renewable portfolio standard (RPS), requiring a certain percentage of generation capacity to come from renewables. Others have enacted feed-in tariffs or similar programs. At the federal level, US attempts to mitigate climate change include the Environmental Protection Agency’s proposed Clean Power Plan, which would regulate greenhouse gas emissions from stationary power plants.

These policies provide several new opportunities for bilateral cooperation. Germany and the United States could link their efforts to develop sustainable electricity generation domestically, creating a broader foundation for achieving lasting results. For example, US and EU negotiators should ensure that the Clean Power Plan and the EU ETS account for carbon emission the same way, opening new avenues for future linkages between the two. Additionally, the ongoing US-EU talks over the Transatlantic Trade and Investment Partnership (TTIP) could provide a framework for aligning vehicle emission and building efficiency standards.

However, any US and German reductions in greenhouse gas emissions should not be undone by increased conventional electricity generation in the developing world. In 2013, US President Barack Obama announced Power Africa—a key US initiative aimed at boosting power generation and improving access to electricity in sub-Saharan Africa, with a key focus on renewable energy. Germany has a long history of working in Africa through the German Agency for International Cooperation (GIZ) and the KfW Group, formerly Kreditanstalt für Wiederaufbau [Reconstruction Credit Institute] with many renewable energy programs such as the GET Fit Uganda Program. By linking sustainable energy policies and development work globally, the United States and Germany together can show other countries how to achieve sustainable economic growth.

Tackling a universal issue such as climate change, not just in the US-German context but also by including the developing world, would strengthen the partnership by:

1)    Moving a critical issue forward through agreement on fundamental challenges and solutions;

2)    Challenging underlying assumptions that Americans don’t care about climate change and that the German economy will falter due to the Energiewende;

3)    Increasing personal ties through cooperation on energy and development policies; and

Collaborating on issues in the climate and energy sector could be a great way to unlock new policy areas for the transatlantic partnership. This is especially true as these policy areas appeal to the “next generation” of young Germans and Americans, with whom the US-German partnership should engage in order to ensure its future strength.

Kirsten Verclas is a Senior Program Officer in the International Department of the National Association of Regulatory Utilities (NARUC), where she works on capacity building programs with African energy regulators at the regional and bilateral levels.

Verclas writes on energy issues in the transatlantic context as a Nonresident Fellow at Johns Hopkins University’s American Institute for Contemporary German Studies (AICGS), and as participant in the Atlantic Council’s Brent Scowcroft Center on International Security’s US-German Next Generation Project.

The views expressed in this article are the author’s alone, and do not represent the views of NARUC or AICGS.

Image: US President Barack Obama meets with German Chancellor Angela Merkel to discuss the crisis in Ukraine at the White House in Washington on February 9. The leaders of Russia, Ukraine, Germany, and France agreed to meet in Belarus on February 11 to try to broker a peace deal for Ukraine amid escalating violence there and signs of cracks in the transatlantic consensus on confronting Russian President Vladimir Putin. (REUTERS/Kevin Lamarque)