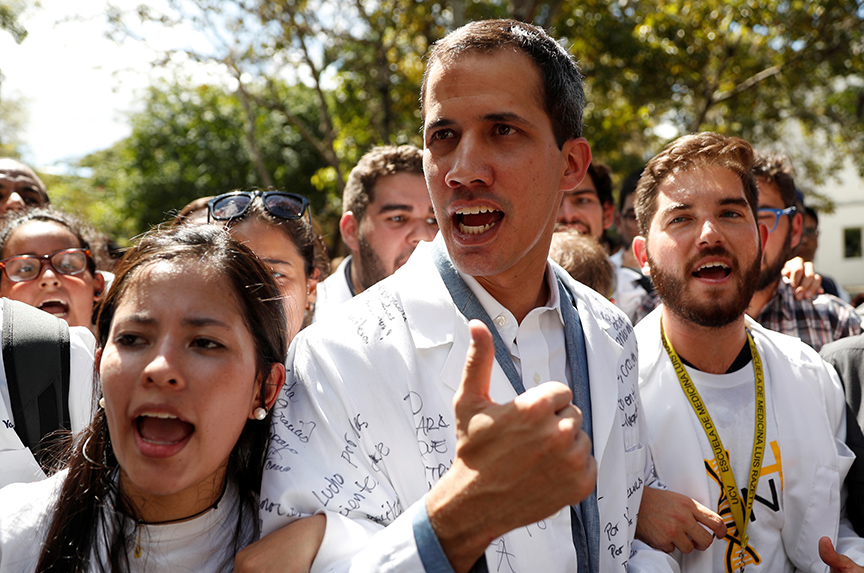 On January 28, the Trump administration again turned to sanctions to ratchet up pressure on Venezuela’s Nicolás Maduro to step down.

The new sanctions measures severely limit key US revenue streams for PdVSA—Venezuela’s state-owned oil and natural gas company—by mandating that any money intended for PdVSA be deposited into blocked accounts, accessible only with authorization from the Trump administration. While PdVSA’s US subsidiary, Citgo, may continue to purchase and import petroleum products (at least until July 27), all payments must also be made into a US-based blocked account. Should that authorization expire, the result will effectively be a US oil embargo affecting a major source of crude oil for the southern United States. Further, the sanctions immediately ban the export of US diluents to Venezuela.  This ban will hamper Venezuelan production in the near term as replacing the US suppliers will take time and likely be more expensive.

On January 25, US Secretary of State Mike Pompeo shifted access to those blocked accounts to opposition leader Juan Guaidó. In response, the Maduro regime is trying to slap sanctions of its own on Guaidó by attempting to freeze his Venezuelan bank accounts and prohibit him from leaving the country.

The US sanctions are intended to facilitate the Maduro regime’s timely demise by depriving it of a key source of income—from the world’s largest-known oil reserves of Venezuela—while seeking to preserve PdVSA’s capacity, production, and revenue for the successor government. The need to carefully balance the near-term impact with the longer-term stability of oil markets and of PdVSA viability prompted Treasury’s Office of Foreign Assets Control (OFAC) to issue a slew of accompanying exceptions to the new sanctions. Among the exceptions, five US companies (Chevron, Haliburton, Schlumberger Limited, Baker Hughes, and Weatherford International) are all authorized to continue their operations in Venezuela through July 27. This extended authorization likely reflects the Trump administration’s expectation that Maduro will fall quickly and the US companies will be well placed to help Venezuela’s oil sector get back on its feet after years of underinvestment and rampant corruption.

Until a transition of power occurs, however, another key sanctions exception is focused on authorizing the maintenance and wind down of PdVSA-related operations and contracts by US persons by the end of March. A separate exception allows for the continued purchase and importation into the United States of PdVSA petroleum products provided all of the proceeds are paid into blocked accounts in the United States to which Guaidó will ostensibly have access.

While such imports are authorized through the end of April, it’s unlikely that the Maduro regime will continue sending Venezuelan oil to the United States knowing that it will not see a cent of the revenue. Instead Caracas will need to identify potential buyers to take on the US share.

This may not be easy, however. Venezuela’s existing oil export relationships with Russia and China are unlikely to fill the gap initially since both countries accept the oil as payment for Venezuelan debt held by Moscow and Beijing. Since much of Venezuela’s heavy crude was exported to the United States to be refined and then sold, Caracas will need to identify buyers with access to comparable refining capacity and the ability to pay up. This leaves India as a likely contender, particularly if India is seeking to diversify its oil imports away from Iran, as the Trump administration has been actively encouraging. (It will be interesting to watch how the Trump administration reacts to an Indian shift from purchasing Iranian oil to Venezuelan.) India and other potential recipients of Venezuelan oil will need to include in their risk calculus that OFAC retains the authority to impose sanctions on those providing financial, material, or technological support to PdVSA and those acting for or on behalf of PdVSA.

US National Security Advisor John Bolton claimed the new sanctions will cost the Maduro regime $11 billion in lost export proceeds over the next year, particularly since the United States has been the largest purchaser of Venezuelan oil. While that estimate is likely exaggerated, the sanctions are certain to effect the Maduro regime’s access to capital. Besides being a major potential hit to Maduro’s coffers as well as the Venezuelan economy (both in terms of revenue and jobs), the United States will need to identify alternate sources to fill the oil gap. While Mexico and Canada already also supply to the Gulf Coast, making both countries potential alternate suppliers, the Alberta government’s decision to curtail production coupled with Mexico’s reduced domestic output means neither country is poised to fill the gap in the near term. Saudi Arabia, Iraq, and Kuwait are next in line as the other leading crude exporters to the Gulf Coast, though Kuwait lags quite far behind. Given ongoing coordination between the Saudis and the Trump administration regarding Iran, the Saudis will likely increase production in the near term to ensure there is no opportunity for Tehran to capitalize on the potentially tighter world oil markets.

Houston-headquartered Citgo—Caracas’ greatest source of revenue—and its subsidiaries are exempted from the effect of the new sanctions until the end of July. Nonetheless, the new sanctions will likely impact the company’s three refineries, 5,000 gas stations in thirty US states, and more than 3,000 US-based employees. The sanctions have already hurt US oil prices as markets react to the new restrictions on the United States’ fourth-largest oil supplier.

Bolton affirmed on January 28 that further actions to dislodge Maduro remain under consideration. There is speculation that such options may include military action, such as staging US troops in Colombia, though the Department of Defense has not confirmed such an intention or any preparations. Arguments against US military engagement are legion: it would, among other things, weaken the impressive solidarity among Latin American and European nations in favor of a democratic and peaceful outcome, and give Moscow a pretext for additional support for the Maduro regime (such as through the Russian regime-connected Wagner Group military contractors).

If the new sanctions fail to quickly topple Maduro, the humanitarian crisis in Venezuela will worsen. Hyperinflation and shortages of food and medicine already plague Venezuela under Maduro’s leadership. The current crisis has prompted more than three million Venezuelans to flee the country as refugees and migrants, according to the United Nations High Commissioner for Refugees. Of those who have fled Venezuela, 2.4 million have found temporary refuge in other parts of Latin America and the Caribbean.  At the same time, the Trump administration has cut down on the number of asylum seekers it is accepting. This policy has not shifted to account for the exacerbated humanitarian crisis, fueled in part by the effects of the Trump administration’s efforts to topple Maduro.

One lesson of sanctions policy is that sanctions can work, but rarely on an ambitious timetable. Despite this, the Trump administration appears to be betting on its new sanctions bringing about swift results. If such results do not quickly materialize, the administration may feel itself under pressure to take further steps, with possibly dramatic consequences.

Image: Juan Guaidó, the president of Venezuela’s National Assembly who is recognized by the United States as Venezuela’s interim president, took part in a protest against Nicolás Maduro’s regime in Caracas, Venezuela, on January 30. (Reuters/Carlos Garcia Rawlins)