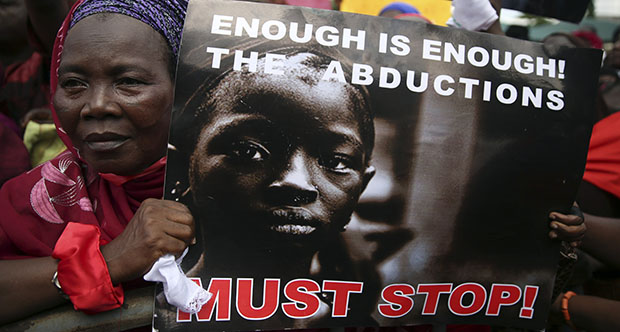 On April 14, the Nigerian terror group known as Boko Haram (which translates loosely into the phrase, “Western education is sinful”) broke into a secular, all girls’ secondary school in the small northern Nigerian town of Chibok. Dressed in Nigerian military uniforms, the militants tricked some 270 students into clambering into the backs of trucks, and then raced off into the night, shooting as they went.

Details were slow to emerge. Early reports underestimated the number of girls kidnapped by more than a hundred, and when some of the girls managed to escape and reappeared in their home villages, a Nigerian military spokesman inaccurately announced that most of the kidnap victims had been returned. Most alarmingly, Nigeria’s president, Goodluck Jonathan, failed for weeks to respond to the kidnapping. Boko Haram, too, was silent.

Finally, three weeks after the kidnapping, both President Jonathan and Boko Haram leader Abubakar Shekau have broken the silence. Shekau released a video proclaiming Boko Haram’s responsibility for the kidnapping, and declaring his intention to “sell” the girls into slavery. In response, President Jonathan made a public statement indicating his confidence that the Nigerian military would soon find the missing children, although he currently has “no idea” where they are.

President Jonathan’s remarks are telling, and have stirred new outrage among a mixed Christian and Muslim audience in northern Nigeria, where thousands of government troops sent to defeat Boko Haram are accused of massive and systemic human rights violations, including burning down villages and summarily executing thousands of young Muslim men. The Nigerian military’s actions have been so indiscriminately brutal, in fact, that it is believed to have killed more innocent civilians than Boko Haram has.

Public ambivalence – or fear – of the government is at the heart of President Jonathan’s inability to locate the missing girls. In the small, close-knit communities of the north, information on the whereabouts of the remaining 230 kidnapped children shouldn’t be so hard to find. The Boko Haram fighters have families, and the girls have reportedly traveled in a convoy formation that would attract attention from local eyes. What appears to be missing is a willingness on the part of the local population to share information with government troops. To win the battle against Boko Haram and to find the missing girls, the Nigerian government needs to gain the trust of local communities.

On his recent trip to Africa, Secretary of State John Kerry promised to do “everything possible” to help the Nigerian government to defeat Boko Haram. Unfortunately, the human rights violations that have turned the northern population against the Nigerian army are likely to deter the United States, as well. US law prevents the American military from providing assistance to troops that are guilty of human rights violations. So, though help is sorely needed, there is likely little that the US military can do. Even if Washington finds the political will and budget to deploy American troops, the Leahy Amendment will make it hard to follow through – and policymakers will also have to weigh the worst-case risk that American participation will be perceived as complicity in the Nigerian government’s violence.

Image: Boko Haram on April 14 stormed an all-girl secondary school in Chibok, in Borno state, then packed the teenagers, who had been taking exams, onto trucks and disappeared into a remote area along the border with Cameroon. REUTERS/Akintunde Akinleye